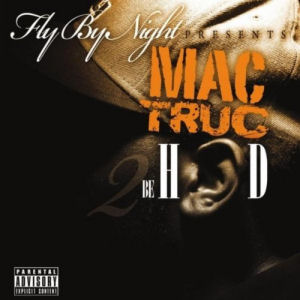 Mac Truc is a rapper from the DMV (D.C., Maryland, & Virginia). He’s been rapping on and off since since 1995, taking breaks to join the Army, get married, and hold down a 9-5. Despite 15 years in the game, “II Be Heard” is his first release, self-released with his Fly By Night co-conspirators Nebulous and RawNote. (They get extra points for referencing a Rush album).

The album starts off with a Cornell West quote, which gives the inspiration for the album title:

“Thank God that there was some voices crying out in the wilderness called hip hop artists and rap musicians that said, â€˜There’s some people down here, living every day, and we’re going to focus on THEIR situation as well. We want our voice to be heard.'”

From the first track, Mac Truc ties himself to hip hop poets like Cornell West and Gil Scott-Heron who use the art form as to express the trials and tribulations of African-American life. Mac does several spoken word numbers on the album, including “Sweet Sexy Legs” and “Atom,” and many of the songs hearken back to jazz-influenced groups like Digable Planets and the Roots.

Mac’s a grown man rapper, meaning he’s above the simple boasting and posturing of younger rappers. He raps with a perspective that comes with living on this planet for a while. For example, while he’s had more than his share of women issues, he discusses them in a much more thoughtful way than your average 19-year-old. He compares a relationship to a chronic disease on “Terminal Cancer,” and on the spoken word piece “Ms. Mirage” talks about superficial women who just want a man with money. You can tell he’s been through the wringer emotionally, but he doesn’t resort to misogyny. He even celebrates women on “Queens,” rapping, “First off, ladies I love you/I wish we all could meet so I could group hug you.” He’s joined on the mic by like-minded rappers TruBless, Asuzu the Zulu, Demarco, and Young Skillet. Bo Beezy and Nicole Morgan provide vocals on two tracks.

RawNote and Nebulous handle most of the production on the album, and offer up a fair amount of tasteful and understated jazz-influenced hip hop, with prominent pianos and hooks borrowed from jazz singers. It’s not all jazzy, though: “Shift Work” has heavy bass and a thumping beat offset by a tinkling piano. It’s raw, menacing, and one of the best tracks on the album. “Y’all Don’t Want It With Truc” sounds like Southern street rap, complete with skittering high hats and Mac barking like David Banner. “What Chall Mean?” is more Southern club rap, and “I Won’t Fail,” produced by BeatBoxer, is bombastic rap rock. It doesn’t work, but is at the end of the album so it doesn’t mess up the listening experience.

“II Be Heard” is not without it’s flaws. Mac drops the occasional clumsy rhyme, and there are too many songs about his female problems. Still, the album has a nice vibe, and there are enough high points (“Shift Work,” “Holiday,” Everybody Gotta Die,”) to make it worth checking out. If you are looking for hip hop with a more mature and introspective viewpoint, Mac Truc has what you need.