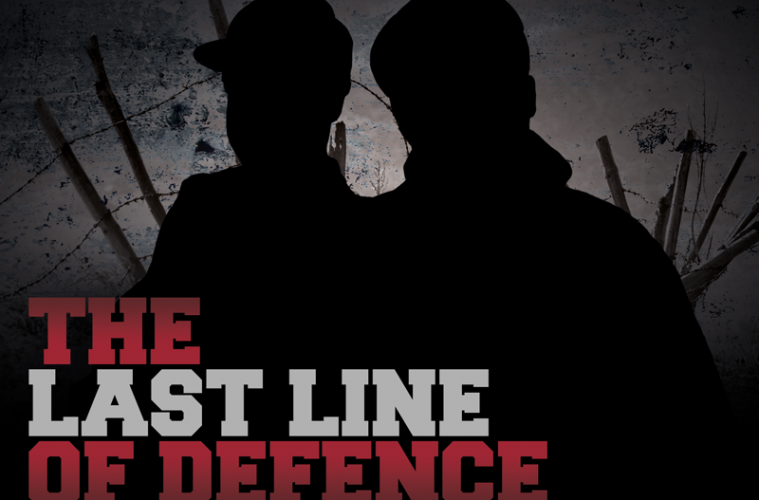 “The Last Line of Defence” is a transatlantic project brought to us by America’s Apaulo Treed and Germany’s Knightstalker. Knightstalker, born and bred in Berlin, has been making steady moves in the last four, five years with song collaborations aplenty, one with Apaulo Treed dating from 2010. “Platoon Leaders” inspired them to tackle a full-length, 10 tracks of grimly dedicated hip-hop that put both rappers forward for features on upcoming Snowgoons releases. They already have considerable underground support, their album boasting production from Harry Fraud and J-Love and appearances from C-Rayz Walz, Maffew Ragazino, Solomon Childs and Meyhem Lauren.

Like other rap duos before them, Apaulo Treed & Knightstalker complement each other, just maybe not in an entirely flattering way. Treed has the gritty voice and stable flow, Stalker the thoughtful rhymes. Conversely, they fail where their partner excels at. The disparity is apparent from the very first track when they trade bars at short intervals and the American meets the German’s elaborate rhyming (“Can’t argue that our shit’s just local / just the mix of our vocals makes our business global”) with the most plain lines. On the level of lyrical skills, “The Last Line of Defence” plays like a ‘Pinky and the Brain’ episode as Knight’s “Apaulo, are you pondering what I’m pondering?” is inevitably answered with some non-sequitur nonsense.

I’d take that low blow back if there wasn’t another connection to Warner’s unlikely couple of lab mice – Apaulo Treed & Knightstalker are on a mission to take over the world, particularly the latter, as he’s adamant to align them with other famous rap tag teams, envisioning them as the “next Royce ‘n Em,” or as making “them dollars like Erick and Parrish / till we dwell in a palace with a terrace that’s lavish.” Cuts like “Only One Way,” “Last Line of Defence,” “No One,” “Blow Up” and “Platoon Leaders” are all driven by the duo’s desire to emerge as notable figures.

None of this should be wholly unfamiliar to rap listeners, and indeed “The Last Line of Defence” is a fairly competent – if painfully common – offering from two rappers with room for personal improvement. They simply happen to pick an already crowded battlefield, and even though they have their own valid aspirations, their position remains that of mere foot soldiers. Still they know their business. The producers have some homework to do in the drum department, but the prerequisite pianos and strings are arranged by the book. Venturing outside the realm of dramatic and militaristic hip-hop, Melanko crafts a serene Asian background for “Chinese Consulate” and conducts “No One (Intro)” with a sung vocal loop the raps circle around. J-Love spices “Tactical Strike Force” with some vintage ’90s flavor as he joins the cypher with Meyhem Lauren. Another highlight is the Romeo-produced, C-Rayz Walz-featuring “Contraband,” the album’s weed song, whose concept is best converted by Apaulo Treed:

“Been a friend of Mary Jane since the age of 12
Spin a blunt, the purple haze mixed with something else
I don’t recall my trip to Amsterdam at all
It’s just a side effect they call memory loss
I still remember them starving cold nights in December
Or was it January, February and November?
A little bit of doja to get your family over
Hit the I-95 with five in the holster
But I’m just a soldier, so I do what I’m supposed to
I was only gettin’ crumbs from the bottom of the toaster
Had to flip the script and turn six into twelve
QP’s into L’s, now I’m runnin’ shit myself
I eat, live, piss, shit, fuck and smoke chronic
Dutch, tree, dog shit, you name it, we got it
Jamaican, Thai stick, even hydroponic
Try and smoke as much as me and end up catatonic”

With some time to mature Apaulo Treed & Knightstalker could develop into a act that can be taken more seriously. One of them needs to sharpen his writing, the other his delivery, and together they need to find more diverse topics to rap about.