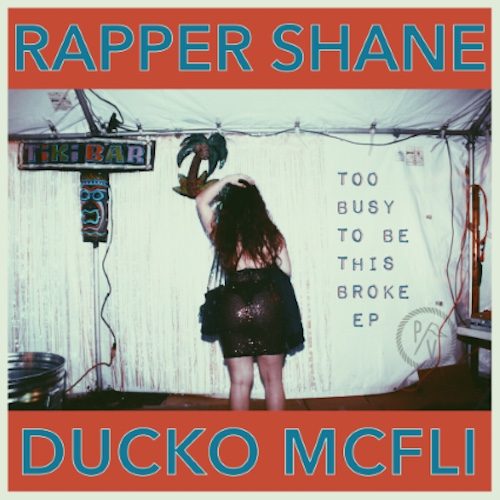 Rapper Shane :: Too Busy to Be This Broke

He should theoretically be too busy to record an album too then right?

Well perhaps that’s why Rapper Shane recorded an EP. Hailing from the Southern state of North Carolina, the rapper I’ve never heard of before today links up with the producer I’ve never heard of before this review — Ducko McFli. McFli hails from the crew I never knew about until I got this album — the Eardrummers. Perhaps “Started” is as fitting a song for Rapper Shane as any on this release – because everything about him comes from a place of “just getting started” where I’m learning about him on the fly. (Fli?)

There’s good news though – Shane’s not that bad of a rapper. He claims to be a student of both Dungeon Family and Wu-Tang Clan, but I can’t say I necessarily hear either one in his flows. I’m more reminded of a mixture of Mac Miller and Asher Roth. He’s got a little bit of swagger, he sounds a little bit nerdy in a non-nerdcore way, and the beats that Ducko McFli and/or the Eardrummers supply definitely suit his flow. The raps don’t smack you upside the head with energy, but they don’t insult you with stupidity. Take the song “Reachin'” for example.

“You stealin all the air, I rarely care to split it
It’s kind of hard from my current position
They say — get a grip, s**t, you out here slippin
I been fallin muh’f***er who you kiddin?
Get up, get up — big up, big up
If you forgot you gon’ know when it hit’cha”

He’s overstating it when he says, “Not the best, but should be up in that top few” but if you’re going to rap you’ve got to at least have the confidence that you’re that good to back up your words. Confidence makes Shane better than he’d otherwise be. He’s also unintentionally playing to the audience by making a rap song called “Hard Time Blues” featuring the late great Dusty Rhodes, but if you’re not a fan of the grappling arts the sample and reference don’t mean anything to you. It’s got a cool-out laid-back beat though. Shane’s friend Jams also joins in on the song. I’d share a sample but I can’t find any online – maybe they haven’t cleared those Dusty Rhodes samples with WWE yet.

The bottom line is Rapper Shane isn’t bad, but he’s apparently too busy to turn in a longer album, which I wouldn’t object to but wouldn’t necessarily be clamoring for either. Like so many new artists that come out in the last year or two I’m looking for that thing that makes Shane different, better, greater, or more intriguing than any other emcee I’ve heard in the last 30 years. I’m looking for that quality that will reach out and grab my ears through my headphones and rattle around in my brain making me want to listen to it on replay over and over again until I make everybody I know listen to it too until they’re sick of it. “Too Busy” is a fair effort but not a single song grabs me and shakes me that hard.

Rapper Shane :: Too Busy to Be This Broke
5.5Overall Score
Music5.5
Lyrics5.5