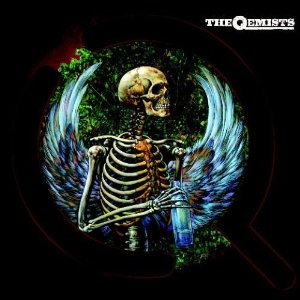 The Qemists :: Spirit in the System

The lights are low. The music is loud. The cute redhead you’ve been hitting on all night long just offered you a drink. Someone walks by sweating profusely yelling to an unseen friend that this is the best night of his life. You wonder if it’s going to be yours as well. You accept her offer of a drink and watch her shapely behind swish back and forth on the way to an overcrowded bar. Suddenly the DJ in the club throws on a record by The Qemists. Your feet start tapping. The cute redhead returns with a mojito, but you’re in no mood to sip on a drink now. You ask her to dance, she says yes, you slam down the minty beverage and go out to the dancefloor to lose your mind. Soon you’re both as sweaty as the random guy who walked by earlier. The redhead has better moves than you. You idly wonder if you remembered to put a fresh Trojan in your wallet.

The Qemists burst on the scene in February 2009 in a wave of noise and fury signifying something – that they were the hottest new thing in the electronica/drum & bass scene. Video game soundtracks and 12″ singles put them on the map. The formerly anonymous trio born Liam Black, Leon Harris and Dan Arnold soon found themselves well known and in high demand. You the reader are saying “Bullshit Flash! I’ve never heard of them.” Of course not. This is RapReviews.com, not EuropeDrumAndBassReviews.com. Fellow writer Jesal ‘Jay Soul’ Padania has dubbed August 2010 UK MONTH at RR though, so it makes sense to give this UK hip-hop influenced trio a spin and see what they’re about.

“Spirit in the System” is only 9 songs and 40 minutes long, but it doesn’t take more than that to put you in that club hopping frame of mind. The boys from Brighton pride themselves on their ability to either make you get your groove on or make you want to do it as soon as humanly possible. A high energy blast of rock and UK rap hits you right at the start on “Take it Back” featuring Enter Shikari, with a chorus where they repeatedly scream “I know we gotta lose control, yeah lose control” and it seems likely anyone dancing to this song probably will. The heavy bass whomps repeatedly like “Humpty Dance” on acid, the drums are so fast they nearly leave the rest of the track behind, but there’s a surprising amount of synth melody to the production that suddenly jumps out at 2:24 when the other layers disappear. That’s a hallmark to the Qemists sound – a layered cake of sound that is happily smashed into your face.

If you check out a sample of “Spirit in the System” and are dismayed that you don’t recognize any of the featured artists, don’t sweat it. As a critic I feel bad that I had never heard of Jenna G before “Hurt Less,” because she’s pretty damn good. The same goes for Chantal of Invasion on “Fading Halo” or MC ID on “The Only Love Song.” The point of The Qemists presentation is that this CD and in fact their entire sound is “Your Revolution,” something demanded by fans who were tired of complacency in the electronica, techno and dance. They successfully fuse together hip-hop, soul, and high BPM for music that’s definitely going to get your ass up and make it get ill. If that’s not your thing and you like to stand on the wall with your arms folded in a b-boy stance, more power to you. Let me tell you though – that cute redhead sure likes to dance.

The Qemists :: Spirit in the System
6Overall Score
Music7
Lyrics5