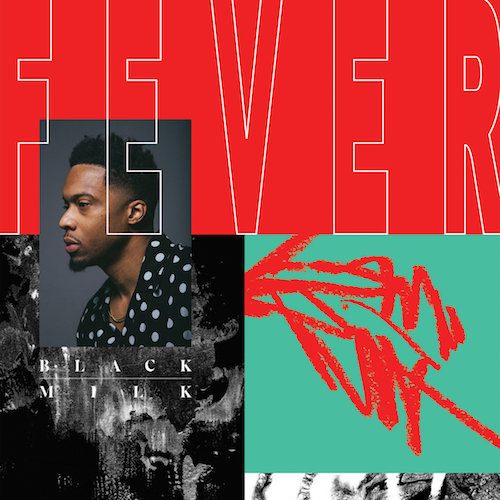 Detroit rapper/producer Black Milk has been making consistently solid music for 13 years. To put it in baseball terms, he always gets on base, but he rarely hits home runs. Flashier artists make bigger splashes and get more attention, but have shakier batting averages. Milk hasn’t ever had a huge hit, but his music is always worth listening to. The downside of this is that he gets taken for granted. The upside is that he’s an artist who has maintained a trajectory of growth over his long career. His latest release “Fever” is one of his best efforts to date.

While Black Milk was originally noted for his boom-bap bonafides, he’s been moving more towards live instrumentation in recent years. His last record, “The Rebellion Sessions,” was an instrumental. “Fever” continues this trend of using live instruments rather than just loops and drum beats. In fact, Black Milk is becoming more of a songwriter than a producer. There is a jazzy R&B feel to most of “Fever” that makes the tracks feel more like songs than just “beats,” with more emphasis on melody than percussion. Even Black Milk’s trademark banging drums have been toned down. I’m a huge fan of Black Milk’s normal sonic attack, but even I appreciated his more subtle approach here. There is a smoothness to “Fever” that makes it feel more like an R&B album rather than a rap album, even though Black Milk’s rapping is as strong as its ever been.

I never think of Black Milk as a particularly strong rapper, but he’s found his lane on “Fever.” He has a steady, unadorned flow, and it works really well with the melodic, fluid beats. Lyrically, he’s hit his stride. There is a world weary wisdom to Black Milk’s lyrics on this album. He’s processing the current state of the country, and reflecting on how little things have improved during his thirty plus years on the planet.

“Do you feel like you’re drowning?” he asks on “Drown.” “Walking around black in a world trapped/Feeling surrounded?” Later in the song he addresses police shootings:

“It’s like officer officer, what have you done
How many apples can spoil a bunch
You just need one
So if you can’t stand up
when fellow officers shoot a kid with his hands up
I don’t know who we can trust”

He raps about friendships gone sour, relationships gone bad, the false impressions sold by social media, and the challenge of finding middle ground in these heightened times. He’s not indulging too much in bravado or bragging. He’s at a point in his life and his career where he doesn’t have to loudly prove himself, and so he lets his talent to the talking.

“Fever” is further proof that hip-hop is not just a young person’s game, and that artists can age in a way that enhances rather than detracts from their impact. It is a meticulously crafted album that goes down smooth and leaves you with something to think about.