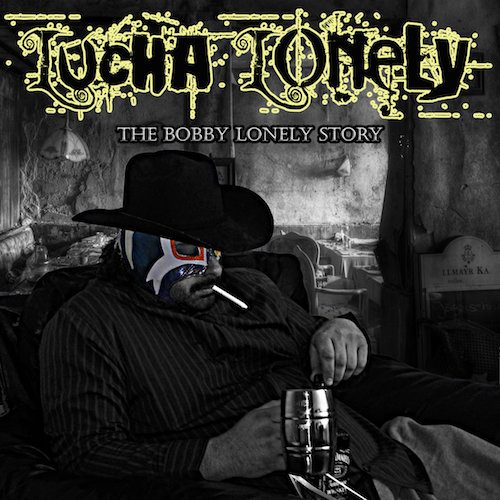 “I used to be a f—in genius
But I turned into a heathen and it’s not just on the weekend
Lookin at the eyes of the Reaper, I don’t fear him
Cause every single day I’m real near him, and hear him”

I have to start this review with a shout out to the late great Bobby “The Brain” Heenan, who passed away just over a month ago on September 14th. The review of Lucha Lonely’s “The Bobby Lonely Story” necessitates it and not just because “lucha” implies he’s a fellow wrestling fan. It’s far more direct than that. Lonely could not have possibly known that Heenan, who had suffered from the debilitating effects of throat cancer for over a decade, would pass away before this album was finalized and released. It always seemed that Heenan would keep kicking out over and over before the Reaper’s hand hit the mat a third and final time, but just as this album dropped Heenan’s shoulders were pinned to the mat for good. It may seem odd to even talk about Heenan in these terms as he was better known as a manager and announcer, but like so many managers he started out as a wrestler himself before his gift of gab earned him even more money. You can hear his golden tones cutting a promo running down Hulk Hogan on “The Ram.”

It’s not just pro wrestling that Lonely draws inspiration from though. The next track “Gold Bangles” opens with a sample of Al Pacino’s performance as Tony Montana from the legendary gangster film “Scarface.” The brooding Lucha Lonely, whose own press release unflatteringly describes him as “a miserable f–k” and “a selfish asshole,” certainly has the voice to match the image he’s been given. His deep baritone register makes him the rudo of Hand’Solo Records, and the slow melodic production of Good Friend Norman caters to that artistic choice. Imagine if Your Old Droog was a miserable, self-deprecating, misogynistic jerk who only said funny punchlines by accident while wallowing in his depression. Take that same rapper and cross him with Scarface then heavily medicate him. That ALMOST sums up the kind of bars you hear from Lonely on “Did Me Wrong,” where like the asshole he portrays he blames everyone but himself for his problems.

“Smack her in the mouth for the disrespect
That’s what you get, for questioning the intellect
F–k the internet, I like being dead
Tuna and mayo on a white piece of bread, uhh
Who the f–k you think you dealin with?
If I see you on the street then I’ma steal your s–t
You f–kin dumbasses, I’ll take your bus pass
and keep on throwin punches while the drugs last
And you know I hope they last forever
Bobby’s lost his mind, before he’s lost his cheddar”

It seems hard at first glance to recommend Lonely, a rapper who only gets close to happiness when he says he’s “I’m on the avenue, sticking up your mother’s friends, B—H!” There’s a place for Lucha Lonely in this world though. Not every movie has a happy ending, not every book ends with a hero who never compromised his morals to achieve his goals, and not every rap album has a protagonist who gets nothing but fame and wealth. There’s a yin and yang to this life and Lucha Lonely represents the balance to every rapper who is happy and successful. In the span of a half hour which goes by much too fast, you grow to appreciate the melancholic musings of a “bastard with one foot in the casket” on songs like the ironically named “I Can Change.”

Lucha Lonely’s album is being issued on cassette as well as digitally, which is a sign of the times since audio tapes are the new “retro” following in the footsteps of vinyl, but I have a feeling these dark and gritty raps would work well in a Walkman with a pair of headphones. I can’t completely give Lonely a free pass for being “the moody rapper” with good beats though. His dour raps are good but the rhyme style is at times cliche, and even a morose rapper still needs a stylistic flair or some good punchlines to catch the ear of the listener. Also even though I find his style to be an interesting choice in a world that’s currently full of bubblegum singing rappers, he’s definitely set the bar higher as a result when it comes to marketing and promotion, because it’s hard to imagine anything here getting radio play EXCEPT on the internet he professes to hate. I’ll let him deal with that irony and still give “The Bobby Lonely Story” a cautious thumbs up.