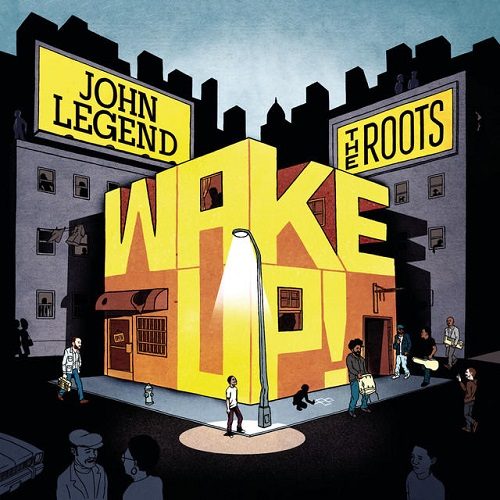 The most surprising about the collaboration between John Legend and The Roots is that they haven’t done it more often! There’s an unforced musical synchronicity when they team up, as though they all grew up on the same block in Philadelphia and kept it all the way live from the 2-1-5 since day one. Of course that’s not true given Legend was actually born and raised in Springfield, Ohio and didn’t come to Philly until he attended the University of Pennsylvania, but you’d never know it by listening to them record together. The naturally invigorating sound of their union on “The Fire” fron “How I Got Over” inspired Black Thought to quip to that they “shine bright as the example of a champion.” Absolutely true. Legend’s soulful croon is deeply rooted in rap tunes, as evidenced by the multiple times he’s worked with hip-hop’s best from Common to Kanye West. Pair him with the live instrumentation of ?uestlove and crew though and BOOM! Pure dynamite.

It’s fair to say then that seeing an album called “Wake Up!” ostensibly offered by both artists working together, not just for a song but for anENTIRE album, definitely caught my attention. The irony here is that I was simply looking for a cup of coffee at the time, but there it was sitting on the counter at the java shop, providing a better perk to me than all the caffeine in the world could. That’s what I get for not paying more attention to Okayplayerwebsite lately – otherwise I wouldn’t have missed this album when it first came out last week. Well I’ve definitely woken up now, and even though I’m a week out on the drop date I don’t feel all that late about it. It probably helps that you can’t possibly feel late with this album’s content – not now, and not ever. What Legend and the Legendary Roots Crew have decided to do on “Wake Up!” is pick a selection of the most profound and powerful R&B and soul music of the 1960’s and 1970’s and do covers. In other words, they are taking timeless music and making it timeless again.

Now the naysayers will instantly jump on any album of cover tunes and try to beat you into submission for daring to enjoy it. The arguments are as well known as they are tired but to explain why “Wake Up!” works lets go ahead and list them in no particular order: it’s uncreative to sing or perform something you didn’t write, it’s disrespectful to the original artist to think you can do it better than they did, and you can’t capture the mood and emotion of the time and place the first version was recorded. Au contraire, I say to you that the social and political issues of our time are just as provocative as they were in the 60’s and 70’s if not moreso. The same political sensibility that informed Bill Withers when he wrote and sang “I Can’t Write Left Handed” exists today – replace Vietnam with Iraq or Afghanistan and it’s the same story. The economic recession makes Donny Hathaway’s “Little Ghetto Boy” even more eerie now – don’t we all have to grow up and face the responsibilities of this failing world?

You can’t argue that these songs are poor facsimiles of the originals either. Oh you can try to, but The Roots band is an accomplished enough crew of musicians that their are both subtle and overt nuances of musical differentiation to everything they play when performing their OWN songs live, let along the classics of a different era. Drummers don’t often get credit for setting the tone or leading the band, but ?uestlove definitively deserves it here, taking the group up and down a wide range of classics providing just the right measure of beats and tempo for each situation. “Humanity (Love the Way it Should Be)” transforms both Legend and The Roots into a Carribean jam band, giving a whole new generation the chance to appreciate the Royal Rasses and Prince Lincoln Thompson. “Wake Up Everybody” stirs up the pot by bringing in Common and Melanie Fiona to add wholly new touches to a Harold Melvin & The Blue Notes classic, as ?uest knows just when to back off and let the crooners and rappers lead, and when to bring the band together to lead the way. They play off each other perfectly.PERFECTLY. “Our Generation (The Hope of the World)” may cause rap fans to catch deja vu, and having CL Smooth rap on it is a very sly nod to the fact this song has been a classic for TWO different generations – hopefully now 3 or 4 more.

“As long as there’s a you, there’s a better me
It’s why we’re together and stronger than they ever thought it could be
A world motherless – can health care cover this?
A love for all people no matter what the culture is
Our generation, is makin huge strides
A self-empowering movement that’s on the rise
The more the door is open, the more the youth can see
a fair chance means a greater opportunity”

Now if there’s one criticism I can offer for “Wake Up!” and it’s the mildest criticism possible, there’s simply not enough Black Thought for an album that by billing has to be considered part of The Roots catalogue. This is The Roots band, jamming their way through the wealth of protest soul that rocks and rolls, and obviously a crooner like the Grammy award winning John Legend is far more important to capture that soul and make it his own. Still it has to be said that Thought’s rap on “Little Ghetto Boy” is just a taste of what could have been and not nearly the full dose you’d want it to be. On the whole though this album lives up to both it’s title and the final track on it – the only original composition of the whole CD – written for the documentary movie “Waiting For Superman.” Quite simply the song is called “Shine” and that’s what John Legend and The Roots do when they work together – shine as bright as the sun.