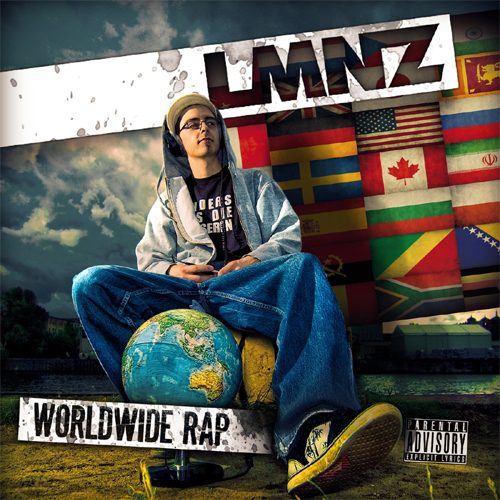 Back in 2003, the RZA of the Wu-Tang Clan released a compilation album entitled “The World According to RZA.” This album featured production by RZA and all of the guests were from European locations including France, Scandanavia, Germany, Italy and the UK. Fast forward to 2010, and we have Berlin-based producer LMNZ (pronounced as “elements”) who had the vision and desire to produce a hip-hop album to serve as a vehicle to bring the world closer. To do this, LMNZ embarked on creating an international and multilingual album along the lines of RZA’s 2003 release. However, there is one major difference between the two albums. LMNZ’ album has representatives from all six habitable continents, whereas RZA’s only explored Europe. In total, “Worldwide Rap” boasts seventy-six artists and features twenty-nine different spoken languages. Some of those languages include English, Hebrew, German, Afrikaans, Greek, Bulgarian, Japanese, Russian, Wolof, Swedish and Spanish, among many more. Some of the artists featured on the album include Savant of RAREBREED, Yarah Bravo, Akanni, ICON the Mic King, Chefket, Noah 23, Charles Cooper of the Liquid Crystal Project, Pikasso and Symmetry, among many, many others, including LMNZ himself.

The musical influences that make up “Worldwide Rap” range from salsa to Arabic to Chinese music, but its larger influences seem to come from the worlds of blues, soul music and jazz. As one might expect, the topical matter of the album spans across the spectrum. Some songs tell the stories of societal ills, while others are stories of love and inspiration. Understandably, listening to an album consisting of twenty-nine languages can seem to be a bit overwhelming. Luckily for the listener, the album download comes with all the lyrics transcribed in English for those who wish to read along. Personally, I prefer to listen to an album like this in its purest form first before having a look at the translation. It forces me to pay closer attention to the emphasis put into the delivery of the lyrics and so forth.

The jazzy “Language” features Noah 23, Kontra & Shtuka, Sister Fa, Ange de Costa and Charles Cooper on saxophone. The piano-laden “So Much Hate” takes a closer look at levels of hatred the world over. LMNZ makes a strong point about how conflicts can seemingly eat away at us all. QWAZAAR bears a striking vocal resemblance to OutKast’s Andre 3000 on “Long Days,” there are also some cuts for flavor provided by DJ Natural. The album comes to a close with the slowed-tempo, but strong “Noone” which features ICON the Mic King, Afro, The Narcicyst and Natty Jean.

“Worldwide Rap” is an album that requires at least three full listens to appreciate it (unless you happen to understand all those languages, and in that case–call up the Guinness Book of World Records or Ripley’s or someone). The first listen allows you to take it all in for what it is. On the second listen, you can follow along with the lyrics in hand. By the third listen, you can vibe a bit more with the music and move closer to fully enjoying it. I’m not aware of how long it took LMNZ to put this project together, but I’m sure it was not easy. LMNZ wanted to bring the world together, and for 1.3 hours, he did just that. Even if everyone doesn’t speak the same language, we’re all able to connect through the music. RZA saw that, LMNZ saw it as well and perhaps we can all see it too.