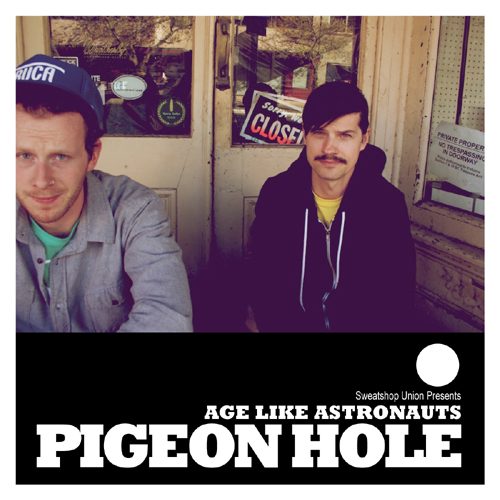 Pigeon Hole obviously loves to play with words. Their name implies as much. It’s fitting their album title presents a phrase that too is open for interpretation. Science will tell you astronauts age just like you and I do. Before that was established, there did exist a misconception that in space time goes slower so astronauts in orbit age slower than those stuck on earth. The accuracy of the concept is irrelevant, but the origin is not. Fueled by the human desire for immortality, the myth reflected just how self centered we can be. In a time when space exploration was opening up unknown frontiers and infinite possibilities, there were still plenty of humans wondering just how these vast new worlds could benefit them as an individual. While I would never call Dusty and Marmalade (Pigeon Hole) self centered, this album is definitely an assertion of the duo’s individuality and distinction for the greater Sweatshop Union collective. Whether the album title was meant to be a reflection of the general wish to live longer lives or a tongue in cheek reference to the fact it’s taken a VERY long time for Pigeon Hole to release their “debut” album, the duo makes the most out of their opportunity to establish themselves outside of Sweatshop Union.

“Age Like Astronauts” is an entertaining ride through the minds of two twenty something males. As such, you can expect it to be a little scatterbrain. The duo goes from highs to lows quickly, but the difference from track to track adds to the album’s appeal. By foregoing a cohesive theme to the album, Dusty and Marmalade allow themselves to experiment with the music with great results. The album opens with “Voodoo,” a track whose name reflects the beat’s hypnotic vibe and the fact the group aims to put you under their spell with their music. “Looptape” definitely gets your head nodding as the duo laces the beats with a triumphant horn sample and reflects on the music they used to bump as kids. From all the groups they mention to the Rap Basement references, hip-hop fans will be hard pressed not to relate to this track. The positive vibes continue on “Light Show” as the duo crafts an energetic anthem meant to celebrate nothing more than their lives as dope rappers. The album quickly changes gears with “You Suck” as the duo gets the opportunity to tell off an ex-girlfriend. The break-up vibes continue on the next 3 tracks. “Hello” perfectly reflects those antisocial times when you want to be left alone. “Jercules” seemingly gives us the other perspective of the break up as the ex-girl writes a letter declaring him the jerk in the relationship. On its face “Sea Tales” is literally a set of tales about disaster at sea, but the track is plainly meant to symbolize the precarious situations we place ourselves in when we navigate our love lives.

As soon as you think you’ve got Dusty and Marmalade figured out they switch things up again with “Year of the Tiger.” This time they address the political and social changes they’ve witnessed. “Down The Block” finds them telling the gory story of “Old Grayson,” a man who murdered three children. The duo goes with a subdued beat whose slowly crawling bass line reflects the deliberate pace used to tell the story. Static crackling in the background gives the track a dark feel. The duo unleashes the energetic, hectic “Emergency” before returning to relationships on “Bonfire.” While the previous songs about relationships were a bit more tumultuous, “Bonfire” is a more reflective take on disagreements and love.

As the album ends, you realize Dusty and Marmalade ran the gamut of emotions on “Age Like Astronauts.” Even more impressive, their production reflected the variety of emotions just as effectively as their words. No song captures this as well as “Bonfire.” As the words “all these thoughts in my mind” repeat, the music evolves into a perfect storm of competing instruments that reflects the clutter conveyed in the words. In the end, Pigeon Hole’s ability to sync their thoughts with the music allows “Age Like Astronauts” to overcome its schizophrenic nature. While the lack of cohesiveness is usually a negative trait for an album, the group makes up for it by fully immersing you in each song.