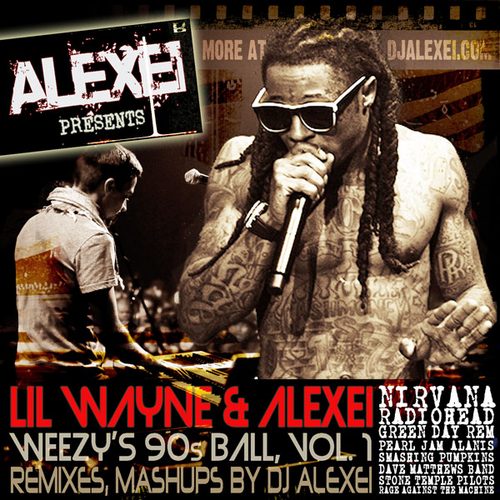 This album probably shouldn’t exist – not for artistic reasons mind you but legal ones. DJ Alexei received a cease and desist letter from Cash Money Records making it perfectly clear they did not authorize or approve of Alexei using, remaking, reinterpreting and/or releasing a mixtape of Dwayne Michael Carter’s music. I’m not a legal expert and wouldn’t claim to be, but when Alex sent me that letter I gave him my uninformed non-legal opinion – shelve the album. Don’t distribute it, don’t promote it, don’t give it away for free, and don’t incur the wrath of their well-financed legal department. Cash Money lives up to their name by being one of the few labels these days staying flush in a recession, and they owe that almost entirely to their cash cow Weezy. They are undoubtedly happy to spend some of that surplus to protect their most valuable asset, even if being so overly litigious is anathema to very culture hip-hop comes from. After all Weezy is where he is today in part BECAUSE of bootleg mixtapes which he intentionally leaked tracks to and recorded songs for.

I’ll say this for DJ Alexei – he’s clearly got brass cajones the size of Boris Yeltsin. Not only does he seem to have flagrantly ignored the legal warning he received, he’s actually spit right in the eye of Cash Money’s attorneys by making the album available FREE on DatPiff.com. As of the publication of this review (November 9th, 2010) the mixtape hasn’t been pulled off their website or any of a dozen other spots which followed their lead and gave away copies of it too. He may be counting on the music industry having bigger fish to fry, but these are the same people who try to sue grandmothers into poverty when their grandkids download free music without telling nana what they’re doing. Even if Birdman is already worth a hundred million dollars, hundred million dollars he’ll probably still fight you for one dollar more. The rich don’t get rich by accident – they get so by being far more greedy and aggressive than the average man. Alex seems like a nice guy so for his sake I hope he’s not flattened to the thickness of a crepe when the fatcat Cash Money lawyers come to steamroll him.

They’re not the only ones DJ Alexei should worry about though. “Weezy’s 90s Ball, Vol. 1 * Rock” lives up to the title by mixing Wayne’s raps with rock n’ roll instrumentals from the days when I was still in college. For that reason many of his choices are immediately recognizable to me even as a hip-hop head, because you couldn’t be in or around college radio without hearing a lot of these songs repeatedly. The funny thing is that he’s not even trying to hide it (again – cajones) because he blatantly lists what he jacked from in the title of each track, such as the “Lollipop (Glycerine Acoustic Remix).” Since “Lollipop” is arguably the song that kicked off Lil Wayne’s fascination/obsession with rock n’ roll and AutoTune crooning, the remix seems entirely appropriate no matter what lawyers for Bush or Weezy think. The beat, the strummed guitar riffs and the acapella are so well met that someone who had never heard the original might think that’s how it was supposed to sound. The same can be said for Alex jacking Radiohead’s “Karma Police” to blend with “Go DJ,” the melodramatic alternative rock melting perfectly between his bars like American in a grilled cheese sam’mich. It honestly scares me how good “A Milli In Bloom” is – a mash-up that Kurt Cobain never could have imagined in his most heroin-induced dreams.

I can’t lie – “Weezy’s 90s Ball, Vol. 1 * Rock” is HELLA fun to listen to. This is definitely not a mixtape thrown together during amateur hour and given away for free because nobody in their right mind would pay for it. In fact if Dwayne Carter had approved it (which Cash Money’s lawyers would never let him do) and all the samples and riffs were licensed (just imagine paying for the rights to Rihanna, Shakira, Sugar Ray and Green Day let ALONE the artists we already mentioned) this would be the coolest legal Weezy mixtape to ever hit store shelves. Of course the chances of that happening were already less than zero even before I started this review, and by the time you read my coverage of this album there’s a 50/50 chance that the album has vanished from the mainstream mixtape outlets. In all likelihood this one will be heavily circulated via underground distribution, which means the worst fears of Cash Money’s legal department will ultimately come true – free Weezy.