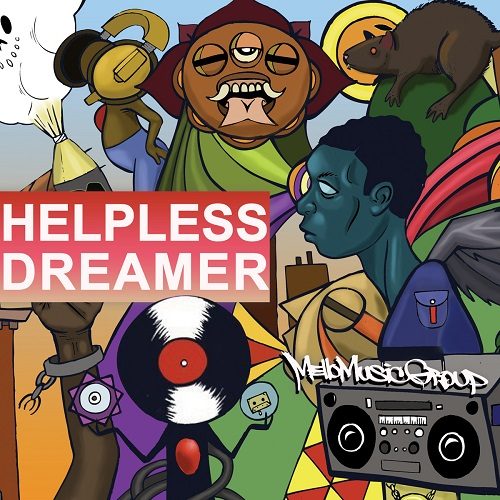 “Helpless Dreamer” is an album full of potential. Featuring over a dozen artists from the Mello Music Group label, “Helpless Dreamer” is a chance for both established and up-and-coming rappers to showcase their skills on the mic. Producers such as Oddisee and Apollo Brown give the compilation an old-school feel — using lots of strings, horns, and chopped up R&B/soul samples â€“ and a handful of emcees, including yU and X.O. of the D.C. based group Diamond District, come through with intelligent, well-delivered lyrics. While the album for the most part lives up to its potential, it is unfortunately blemished by several songs where the vocals are simply not loud enough and seemingly hide behind the track.

The album starts with a bang with “From the Top,” produced by Oddisee and featuring Stik Figa. Every sound seems to come alive on the track, whether it’s the simple piano loop, the deep rolling bass, the exultant trumpets, or the flowing orchestral synths that lace the chorus. The sparse nature of the beat really allows Stik Figa’s commanding delivery to shine through, as he raps: “From the projects to the trailer park, I did it for ya’ll.” Oddisee, who is also the founder of Diamond District, produces several other tracks on “Helpless Dreamer,” as well. “Birds & Bees,” featuring yU and X.O., incorporates go-go drums to give the track a unique sense of D.C. flavor. “Different Now,” on the other hand, samples the 1978 R&B song “Am I Losing You” by The Manhattans over a shimmering synth that dances across the track.

The Oddisee-produced tracks are by no means the only songs that shine on “Helpless Dreamer,” though. “Home Comes First,” produced by Apollo Brown, sees Kenn Starr (also from the D.C. area) and Finale (from Detroit) telling stories of their respective hometowns. A set of pronounced brassy horns gives the track a nostalgic feel as Kenn Starr spits the opening lines over a head-bobbing drum loop: “VA born, Maryland raised/ I appreciate and treasure them days, it’s what made me.” “Black Rose” pits a desolate old-school soul sample over soft, eerie strings, as Has-Lo displays a remarkable talent for storytelling over his own beat. “This Is It” has a much more upbeat feel to it, though, with a pulsing piano loop and a new-school set of drums over a chopped up R&B sample. Once again, yU tears the track apart with his powerful flow, as he raps:

“So watch your step
I leave em stumbling, like a fiend
Me and the mic nothing to come between
At 16, ever since then it kept me company”

Perhaps one of the best instrumentals on “Helpless Dreamer,” though, is not an actual song but rather one of the two musical interludes on the album. “FuckWitDat,” produced by Has-Lo, features a heavy, old-school set of drums over a sparse piano that is reminiscent of the famous DJ Premier piano loop from Nas’s “NY State of Mind.” The static in the background reinforces the gritty vibes of the track, and it is truly a shame that no emcee gets a chance to spit on it. The other musical interlude, simply titled “July 27th, 2010,” has a more electronic, new-school sound to it, and while it is still a well-produced track, it simply can’t match the underground feel of “FuckWitDat.”

At this point, it may seem that there are almost no shortcomings on “Helpless Dreamer,” but unfortunately this is not the case, as several songs simply do not measure up lyrically to the rest of the album. On “Judas Priest” and “Official,” the vocals are at times inaudible, and it almost feels as if the instrumental is meant to overshadow or cover up the subpar lyrics on purpose. The same problem is present on “Don’t Sleep,” a hardcore, synth driven song that sounds like it belongs on a Tech N9ne album rather than “Helpless Dreamer.”