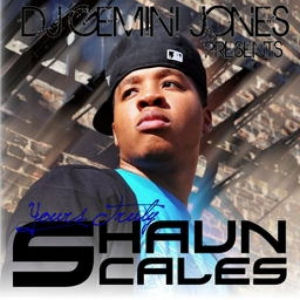 I’ve decided I’m gonna mix things up a little bit for this review. Since I’m not too familiar with Shaun Scales and I’ve got some conflicting feelings about this project I’m going to just treat this review like an employee evaluation.. or something.

Here are some of the things I like about this project:

1. Shaun Scales is a fairly polished rapper. His lyrics are on point for the most point, flow and delivery are no different.
2. Production is good, other than a couple duds (“I Got It” being the biggest offender), in regards to beats this is comparable to a standard Cam’Ron mixtape.
3. The project is pretty consistent, and it seems to me that Shaun Scales put an equal amount of effort into every song.
4. Shaun has a smooth cadence and performs with a degree of confidence that leads me to believe that he possesses the self-awareness that he has legitimate talent, and when you have that, good things usually come from it. (Unless you’re awful and delusional)
5. Hooks and choruses hit when appropriate, and despite a pinch of redundancy at times, Shaun seems as though he has an ear for the “X-factor” in terms of replay value.
6. This project gives the impression that Shaun Scales really wants it. There’s a hunger in his music, and something tells me that Shaun Scales is the type of artist that works to improve upon his flaws.
7. “Party Hard” is a pretty hot track.
8. “What About Me” is his best performance on the disc, and if he were to release a project full of songs as good as this one, Shaun Scales’ next project may be presented by a major label, rather than a DJ.

Here’s the things I don’t like about this project:

1. It can be redundant at times. The production never rises or falls from certain level of quality, and while it is of a relatively high level of quality, there isn’t much variety.
2. The redundancy of the production is compounded by the redundancy in subject matter. Lyrically, this project really doesn’t touch upon all that much besides the conventional topics you hear from artists fighting their way up, the drive to succeed, party joints, etc. etc.
3. While he is polished, and obviously talented, there is enough room for improvement at this point for me to say that if Shaun Scales does not improve upon this project in the future, I cannot say there is a realistic chance that I personally would play his music consistently in the future. It’s not that he’s not good enough to sustain a full length project, it just seems as though he’s a step or two away from being a legitimate “next big thing.”
4. While the “Journal Entry” skits do give Shaun Scales a bit of humanity, which he could benefit from, they do ultimately fall into the category of “skip worthy material”
5. There are about four songs on here under two and a half minutes long, and for the most part those songs could’ve benefitted from being seen through a little bit more. They kind of give off an impression that maybe they were among the last recorded and possibly rushed? Not bad, but coupled with the fact that none of those songs really stand out all that much when compared to the best tracks on the album, some of these tracks may also fall into the category of “skip worthy material.”

I personally enjoyed this album. In fact, it’s the first album of its kind that I’ve enjoyed in a long ass time. The style of production is relevant to what’s buzzing today, and despite the fact that I’ve never really been that enthusiastic about this type of sound, I must admit that at the same time I’ve grown to dislike that sound because I think that most of the rappers who rap over this type of production are either overrated, or suck. Shaun Scales does not suck, which in of itself puts him further along than a long list of rappers out there right now. I think there’s a future in rap music for Shaun Scales, but how lucrative and prominent that future is really depends on his ability to kick things up a notch and awaken the Shaun Scales he feels the world needs to hear. He’s intelligent, mainstream, well-rounded, relatively inoffensive, and he has a lot of potential. So, all in all, “Relatively Yours Shaun Scales” gets the approval in my book. Job well done, Shaun Scales.