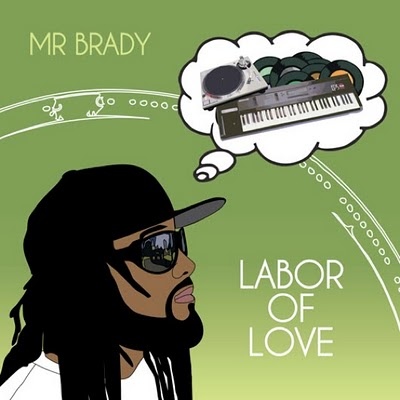 “You don’t need a big studio to do it, know what I’m saying? We do it for the love.”

This quote from the intro track of “Labor of Love” truly embodies Mr. Brady’s vision on his latest album, which sees him take a break from the microphone and focus almost exclusively on producing. Featuring lots of chopped up soul samples, hard hitting drums, and electronic synths, “Labor of Love” is essentially a compilation album, produced entirely by Mr. Brady, that features a number of underground rappers, most of whom are from San Diego and Los Angeles area. Mr. Brady readily admits that he doesn’t necessarily have the best equipment to work with, and while this seems to hamper several tracks, it also gives the album a raw underground feel.

The album’s lead single, “Real Heavy,” features Detroit rapper Guilty Simpson and California emcee Johaz (of Mr. Brady’s group Deep Rooted) spitting over an aggressive track driven by a hard-hitting kick. Aside from a constant synthy piano and a few background electronic noises, the beat is fairly thin, which allows Simpson and Johaz’s powerful deliveries and gritty lyrics (“I come from a Detroit basement/ Guns are blazin’ and dent your face in”) to reinforce the hardcore vibes of the beat.

Only two tracks later, though, the album has a completely different feel, as a smooth jazz trumpet sample gives “Get Choze” a very easygoing feel. Featuring Diamond D and Blu, who urges the listener to “relax, set your mind at ease,” “Get Choze” is a nice change of pace from songs such as “Real Heavy.”

Just as the rappers vary from song to song, so does Mr. Brady’s production style. On “Impossible,” Kas One’s unique flow and colorful style work perfectly over the pronounced electronic synths laid down by Mr. Brady, who also scratches lyrics in for the chorus. “Everything,” one of the most powerful and meaningful songs on the CD, features Sha Dula rapping over a chopped R&B sample about his mother, as he spits: “you’re my guide in life, what I inspire to be.” On the other hand, Mr. Brady returns to the relaxing vibes of “Get Choze” on “That Soul,” which features Tajai of the Souls of Mischief and Just Brea of Deep Rooted. With a soft piano and a soothing sample in the background, the song truly has a soulful feel to it, and Mr. Brady samples the Common lyric “Come on ya’ll get live get down” for the chorus. “Catch” has a laid back vibe, as well, with a set of mellow synths and strings and a catchy chorus:

Unfortunately not all the songs on “Labor of Love” have the same production value and lyrical prowess of the aforementioned tracks, as a few beats sound like they could have used a little more polish in the studio. Aside from a sub par effort from emcee Moka Only, “Get Smart” also features an immensely irritating synth that overpowers the rest of the track and makes it hard to listen to all the way through. “Move With the Times” also features several discordant electronic noises and has the same feeling that something is slightly off, as the drum loop seems like it’s sped up too much. And while “We Got That” has a unique, sitar-like guitar pluck that drives the beat, a clichÃ©d first verse and a cheesy brass-heavy synth on the chorus bring down the song.

The bottom line is that, despite a few shortcomings, “Labor of Love” has enough solid tracks to keep underground hip-hop fans happy. Mr. Brady, who has been active in the San Diego hip-hop game since 1995, continues to prove that you don’t need fancy production equipment to make a dope beat. It may not lead to the most polished sound, but Mr. Brady’s old school method of production makes for an authentic underground style that resonates throughout “Labor of Love.”