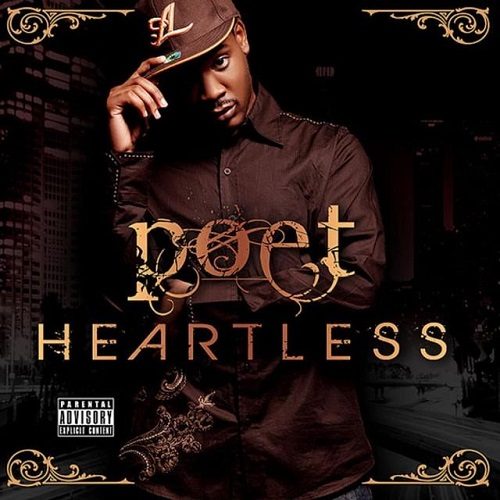 Few independent label rappers truly deserve a debut album more than P.O.E.T., which stands for Perseverance Over Everything â€“ a fitting title given all the Baltimore-raised emcee has overcome. After releasing his first mixtape in 2005, titled “Open Mic,” and generating some buzz in the underground rap game, he was forced to take a break from music following the death of his best friend and problems with debt. Upon returning in 2007, his debut album “Destination: Fame” was pushed back for over a year until the project was finally scrapped all together. Undeterred, though, P.O.E.T. continued to rap and produce, and early in 2010 he began working on “Heartless.” He encountered another traumatic setback, however, in August, when he lost his first born child during the delivery process. Rather than step down, P.O.E.T. pushed forward â€“ as he raps: “I just try to find a way to turn the suffering and pain/ Into a positive domain, you feelin’ what I’m sayin'” â€“ and finally released the debut he deserved in October.

“Heartless” starts off with one of the best tracks on the entire CD, “The Introduction (Part I),” as P.O.E.T. spits over a crooning jazz trumpet:

“Listen up I got a story to share with you
A formal introduction is needed so let me clear the room
My name is poet, I’m not just a rapper I’m an artist
So when you hear my shit think of it as a work of art
Cause I’m an abstract rapper, spit in any vernacular
I keep it hip-hop but bring the R&B swagger”

“The Introduction” also establishes the central concept that “Heartless” is built around â€“ P.O.E.T.’s failed two-year relationship. The next song, “Fade to Black,” features a catchy synth and grand piano over a deep, rolling bassline, a far cry from the old-school, jazzy vibes of the opening track, and P.O.E.T.’s flow once again takes over the track and never falters. After another sharp turn on “In the Air (Hands Up),” which begins with a sample from Dre and Snoop’s “Next Episode” and quickly transitions to a hardcore beat driven by an aggressive set of drums, it’s hard to know what style to expect next. One thing that’s for certain, though, is that P.O.E.T.’s powerful voice makes “In the Air” a head-bobbing delight.

“Heartless” stumbles, though, with the more reflective, synth-heavy “Girl of My Dreams,” as P.O.E.T.’s sharp lyricism that carried the first few tracks is seemingly lacking. In addition, an overly simple drum loop and a less than powerful R&B-type chorus give the song an unpolished feel. On the other hand, the next track, “Heartless,” features a smooth and catchy hook sung by Allysha Robinson, as P.O.E.T. opens up and spits three passionate verses about his ex-girlfriend and their past relationship. He switches things up again, though, with the upbeat marching band horns and quick hitting drums of “Feel Me Now.” Despite an unoriginal chorus, P.O.E.T.’s precise diction and confident lyricism shine through on the track, giving it the same energy as “In the Air (Hands Up).”

Unfortunately, this is the point where things start to get repetitive. “Jump Off” is a very one-dimensional song about picking up girls that really brings nothing new to the table in terms of production. “Suicide/Heartbreak” sees P.O.E.T. once again dealing with the aftermath of his breakup, and his lyrics are overpowered by a beat that simply has a little too much going on. What’s more, the chorus from an unnamed female singer is buried under a hail of snare hits, synths, and guitars that don’t do it justice. “The Bad Guy Lives On (Heartless, Pt. II)” is also plagued by an annoying, synth driven beat and simplistic lyrics, and by the time “The Fame” finishes out the album, P.O.E.T.’s flow feels a little worn out.

“Heartless” definitely has its moments, particularly some of the more old school hip-hop based songs, but it simply loses its spark by the end. Even with only ten songs, P.O.E.T. doesn’t mix things up enough lyrically to keep the album interesting throughout, and save for a few tracks the production isn’t anything to rave about. That being said, what does shine through on “Heartless” is his dedication to overcome his struggles and succeed in the rap game, and the handful of tracks that truly showcase this, such “The Introduction” and “Heartless,” make P.O.E.T.’s debut album at least worth checking out.