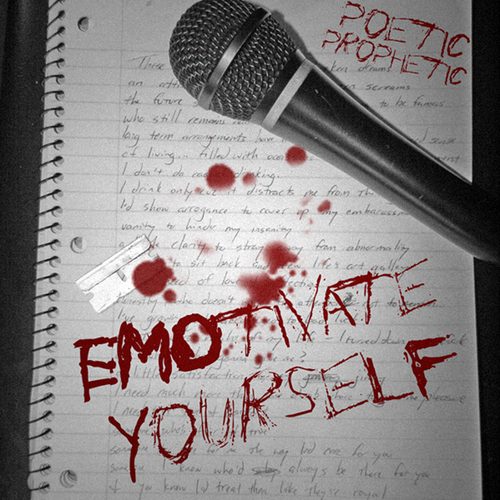 ‘What’s in a name?’ – if it’s as bland as the above, a lot. Note the pretense: the artist, who is flatly NOT a poet, is ‘poetic,’ thus full of depth stylized via well-crafted imagery, puns, ideas, etc., and ‘prophetic,’ thus ‘seeing’ far beyond an ordinary mortal’s ken, including the listener’s, who can only marvel at the talent, and grovel at his prodigious feat (get it?). Uh, enough! It’s an unoriginal combo re: any poet since written history, and probably before writing, too. Put ’em together and you have a silly jingle that’s become meaningless, especially in ‘street art,’ where pretense is big and talent often non-existent. And, this is a big problem in subcultures: real, unappreciated innovations usually melt into nihilism and pure formlessness, because ‘unfocused slop’ is often confused with ‘originality.’ No, good artists know the difference, as well as their own limits.

So, how’s the music? The title track opens with a light piano, drums, and guitar – really, the inoffensive ‘philosophical’ tinge is expected. It doesn’t really change throughout the entire song. It’s bland, and so is the content:

“To me, each season represents a state of being
Springtime symbolizes first a time for rebirth
another chance to put my mind at work
Summertime, I yearn for more of it
it’s so euphoric; I love the freedom
Autumn is all about change
that’s beyond control
it’s all inevitable; adapt or lose your soul
Wintertime – so cold, so dark and all alone
warmer days approach, but they’re long down the road
You can either wait, or you could take control
I’m a lost soul; never know which way to go”

No, it’s not poetic. Every clichÃ© re: seasons, emotions, and so on, are done, as if Poetic Prophetic has never heard of them. I mean, how many times is Spring associated with rebirth, or Summer with freedom? Is there ANYTHING here to salvage… anything profound, or even novel? No. And, since Poetic has a weak voice and poor flow, it’s not even competent from a technical perspective. As the song goes on, he claims he can’t forgive himself for past mistakes – but, what are they, and why should anyone care? The fact that the album cover has a mic, a razor blade, a notebook full of corny poetry, and bloody letters with “EMO” bolded in the title, makes the whole thing seem like a parody. But, it’s not, and does not improve in the final half of the track.

“Escape the Pain” is similar musically and with banal phrases like ‘storm clouds’ and ‘inner demons,’ of identical lyrical caliber. “Keep Moving On” is better, strictly for the good flow of Liotta. Still, nothing of substance. “Now You Know” is so general – “And heal the children from the poisonous influence/ Brainwashed by ignorant simpletons” – and dull musically, complete with an ill-placed, feel-good chorus and a declaration that he is ‘the Messiah,’ ‘the Chosen One’ (‘Chosen by the people!’ – who?!), that it might as well be a parody of what’s wrong with ‘conscious’ rap. Although produced by intelligent, well-meaning people, it usually has no style, nor distinction, just lots of empty bragging. Thus, good intentions are simply not enough, as Poetic Prophetic eloquently shows.

“The Amazoness,” besides having a weird, redundant suffix in its title (!), is a clichÃ©-fest –

“Be my Mary Magadelene
My Madonna
My Amazoness, heaven’s goddess
beautiful like Shakespearean sonnets”

– that, unless PP is describing a butch beauty who is also a virgin, a prostitute, and a warrior, doesn’t make sense. Those juxtapositions aren’t ‘daring,’ merely lazy and illogical. A ‘lyricist’? No, even though in “Natural Phenomenon,” PP claims to get on some “GZA ‘Genius’ type shit” – revealingly comparing himself to the overrated rapper – and offers the horribly awkward, “Your rhymes are long and drawn out/ like comet tails!” It’s funny, but not in the way Poetic intended. “Play Out In The Rain” features a good sample, and listenable production, but One Third’s drowned, uninteresting verse, and PP’s typical performance, conspire against allowing it to become a good song. I’m sure everything here has potential, but so do most things. It’s execution that counts, and it’s execution that forces most artists to fail, including Poetic.

There really isn’t one good song here. Some things are abysmal, the rest mediocre or slightly below that. I do not detect a hint of parody, which means Poetic Prophetic simply took all possible clichÃ©s surrounding love, nostalgia, pain, mistakes, etc., and decided to utilize them in an awkward synergy as bathetic and emo as its title.