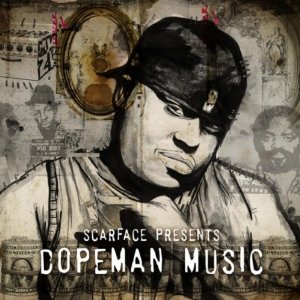 2010 may just mark a definite change in the storied relationship between Brad ‘Scarface’ Jordan and Rap-A-Lot Records. His perhaps most widely acclaimed album, “The Fix,” had been released on Def Jam South during his presidency there, but he eventually returned to his longtime label, before communicating the end of his rap career with “Emeritus.”

It wasn’t long, however, before Mr. Scarface announced plans to retire from retirement. His first days back in office (or the recording booth) must have been business as usual. The initially only digitally available “Dopeman Music” adds a mixtape chapter to the Scarface saga, but nothing new in regards to content or style. The project also reaffirms his inclination to share the spotlight with other rappers, specifically virtual unknowns. Two he helped introduce in 2006, The Product’s Malice and Willie Hen, make each an appearance, but his current sparring partners are Monk Kaza (from Scarface’s stomping grounds South Park) and B. James (representing Detroit), who both turn in solid performances. Perhaps more important than the guest list is the name mentioned in the credits as ‘production coordinator’ – Bido 1, one of the architects of the Rap-A-Lot sound, remains loyal to Face, which furthermore ensures continuity, last but not least quality-wise.

The mixtape kicks off with “Picking up the Pieces.” Over a euphoric, symphonic beat Face promises a new album (tentatively titled “Under Oath”) since “the Madman’s Diary got a bunch of pages left.” The intro also serves as a goodbye to whoever may feel concerned (such as a certain label boss): “Your partner standin’ there with that smirk on his face like, ‘Yeah, I told you’ / But you ain’t really told a nigga shit / I’m my own man, I got my own motherfuckin’ dick / got my own balls, got my own word / That’s absurd / I done put in all this work and you done took what I deserve.”

Next up is the title track, the first out of five to feature the line-up Face/James/Kaza. Over an early stand-out production replete with moody organs and fuzzy bass creating an almost jazzy atmosphere, they bond with those in the daily struggle and hustle. If Bido had a couple of vintage ’90s beats left, “Hustle Game” must have been one of them, a hearty stew of traditional southern funk ingredients, inspiring another deeply existential and realistic verse like we heard so many from the man. The excellent “GWAP” and “Wanted” provide the type of menacing soundtrack you hear so rarely outside of Houston and that for instance could have added a few degrees of darkness to Fat Joe’s “The Darkside Vol. 1.”

For fans who expect the usual from Face, “Dopeman Music” doesn’t disappoint. On “Get Lost” he shows an ex quite plainly why he is done with her. “2 the Beat” is prone to convince the most peace-loving listener that gunplay and rap music are simply meant to be together. On a more reflective note, the one minute-long “The N Word” is more than just the intro to “The Ghetto Report” as he blasts the Harris County DA who had to resign after joke mails of sexist and racist nature were found on his office computer. The rapper can’t refrain from a little told-you-so himself:

“And now it’s out in the open, the district attorney was a racist
nigga-hatin’ redneck cracker out chasin’
the young black male in the hood tryina get it on some legalized hustlin’
fuckin’ with this music
Can’t catch him doin’ what he don’t, so you plant shit
Lock a nigga up for the x pill you hand him
The same officers don’t like the Hispanic
community – it’s up to you and me, goddammit
You gets no respect in the courts if you black
If you a Mexican, they wanna try to send you back
to the border; white judge, black court reporter
DA startin’ off handin’ niggas quarters”

He drives the point home in the opening verse of the sorrowful “The Ghetto Report,” while B. James and Monk Kaza finish theirs without him on “In the City” over a beautiful Nina Simone loop.

With plenty of room to maneuver, Face does – exactly what he’s always done. He plays the guy who will never let go, the hood veteran with a flock of young disciples, the drug kingpin starting from zero again. He’s out to give ’em what they want and out to get his – to the point where he even considers another Geto Boys reunion:

“In the hood real niggas need that crazy shit
that’s what I faze em with
A Geto Boy till the end, got the tats to prove it
And even though I’m out the group I still blast the music
I’m what the game was and is, the business side stopped me
Fuck it, they pay me, then I’m back like Rocky”

Sometimes for artists, however, things don’t only have to make dollars, they also have to make sense. “Dopeman Music” doesn’t make an awful lot of sense for a guy who’s already proven himself in this job over and over. Now would be the time to seize a few of the many opportunities that wait for an artist of his caliber. The world is his, or is it not?