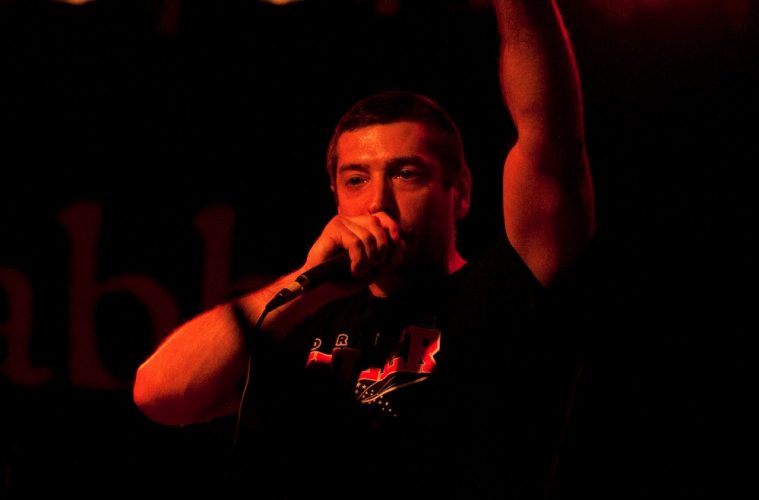 Verbal Kent doesn’t want to engage you on Twitter. He wants to engage you with his music. Ten years, and six solo albums, into his career he’s carved out a place for himself in hip-hop where he’s been able to do just that. His fan base has grown steadily since his first release and he anticipates it expanding even more with his latest album, Save Yourself

, which he feels is his most accessible yet. This week RapReviews caught up with Verbal Kent to find out what Save Yourself

is all about, why he’s never shopped his music to a record label, and the growth he’s seen in Chicago’s hip-hop scene.

Adam Bernard: Let’s start this off by talking a little bit about your new album, Save Yourself

. What does the title, and the title track, mean to you?

Verbal Kent: It means a couple things. I mention save yourself in the first song. In a way it refers to everyone being responsible for who they are in the universe, in the system that we’re in right now, and taking care of yourself and relying on yourself more and not on the way things have been set up and given to you, as far as politically speaking. So it has some meaning in a political sense, and from an emcee sense it’s look out cuz I’m coming to get ya so you better save yourself. It’s a threat and it also has a political reference for sure.

AB: So it’s a threat AND a suggestion.

AB: In terms of the suggestion and the living the life part, why have you decided to talk about this subject right now?

VK: With the way the media is right now, and just the amount of information spewed at everybody nonstop nowadays, I think “save yourself” represents shutting everything out, ignoring everything, and taking care of your own business and not relying on everybody else.

AB: I noticed you’re not on Twitter. Would this be another aspect of this?

VK: Maybe. I guess it does tie in a little bit. I think Twitter is the easiest example of how nobody can shut up for one second nowadays. I think most of everyone’s daily life is sort of uninteresting and unimportant. It’s not that I don’t like people, I (just) don’t think anybody should care that much about everything and every moment in everyone’s life. I think it’s better to focus on yourself a little more. I don’t think everything needs to be recorded and there for everyone to see all the time. I’m down with Facebook. I’m obviously down with promoting the music. Where would be without social media, without social networking? But as far as Twitter, it just seems a little exuberant. I just don’t care enough about anyone except for those close to me to be that interested in anything.

AB: I’m a user… wow, it really does sound like a drug when I say it that way, but I can certainly see how in terms of social networking it’s like CNN; 24 hours, constantly updating, and even CNN is barely news.

VK: Right. I know it can be used correctly, too. Anything can. If you use Twitter and you use it the right way I’m sure it’s valuable. I’m sure I could find it valuable, too. I’ve just been avoiding it as long as possible.

AB: Since you’re trying to save yourself from Twitter right now, let’s get back to Save Yourself

. I’ve read that you feel this is your most accessible album.

VK: Yeah. I think what I mean in terms of accessibility for this record is it’s the easiest for someone who isn’t a Verbal Kent fan to start with. It’s not too underground, or too mainstream, or too anything. I think it’s just a good mix of all the kinds of hip-hop music that I make. A lot of the records I make I feel like are strictly for hardcore rap fans, and I think this is the closest I’ve come to making an album that I’d just give to anybody on the street, like “check this out, what do you think?”

AB: Do you think it’s the kind of album that could lead a new listener to explore your earlier work?

VK: Probably. That’s the goal. As an independent artist of my caliber, I have six albums out, one group project, three vinyls, and some t-shirts, so I have 11 things that someone could buy, so if they like one thing hopefully they will check the rest.

AB: As you just noted, you have quite a vast history. You’re also part of Chicago’s long lineage of emcees. How much more is there to the Chicago hip-hop story than what those of us outside Chicago know?

VK: You know, it’s funny, whenever I travel, when I hear about what people know about Chicago there’s usually a couple names that come up and I’m lucky enough to be one of those names in terms of underground hip-hop. Everyone knows about Juice and Vakill, people talk about Matlock and Typical Cats. There are four or five labels in Chicago that came out that were doing their thing and making noise. There was Molemen, Gravel Records, Galapagos Four, All Natural. I had a great time when I started making music, when I started gigging and playing out. It was the late 90s / early 2000s and every week there was a hip-hop show. Every week there was an open mic you could go to. It was a blast. I think there are (artists) that now have emerged from that period who are starting to get out and tour. There’s myself, Pugsly Atoms, Diverse, Adad from All Natural, Mass Hysteria, there’s a pretty good group of us that are hittin the road. If I’m in another country I might see a flyer for one of these guys for a show coming up, which is pretty cool.

AB: That’s very cool. My knowledge of Chicago hip-hop started when I went to college in ’96 and my roommate was from Chicago, so he put me on to Psychodrama and a lot of stuff like that.

VK: Oh sure, if you want to go deeper than what I just said, in the mid-90s there was a huge Southside / Westside Chicago hip-hop scene, (but) it wasn’t really the underground backpacker style hip-hop, it was a little harder. You had Twista and Do or Die and Crucial Conflict and all kinds of stuff like that. All sorts of Chicago stuff that came out scared a lot of people. {*laughs*}

AB: You mentioned a whole bunch of labels in your area. Is it really true that you’ve never shopped a record to a label?

VK: I’ve been a part of two indie labels that were smaller Chicago labels. I did one release with Molemen and a few with Gravel, but those just fell into my lap. I’ve never sent my music to a company in hopes for having them do anything that I couldn’t do for myself on an indie level.

AB: Obviously you enjoy the route you’ve chosen. What about it makes it feel right for you?

VK: That’s a good question. I definitely like the process and the experience of putting out your own record and seeing what happens with it and being able to pinpoint who listens to you, what it is about you that people like, and getting your own shows off of that. It’s like each record is its own business, you’re starting your own company with each record, which is pretty cool. Obviously I don’t know how it would be to be on a major. I have a feeling that all that’s taken away from you and that you become a product. My experience right now is owning my business and if I were to be on a major I would be a product that someone else is selling. I think that’s the easiest way to put it, and I don’t really know if I want to be a product.

AB: If you don’t have to be why bother, right?

VK: Right. There comes a time in everyone’s life when that might be more appealing, but I don’t really know if I’ll ever get there.