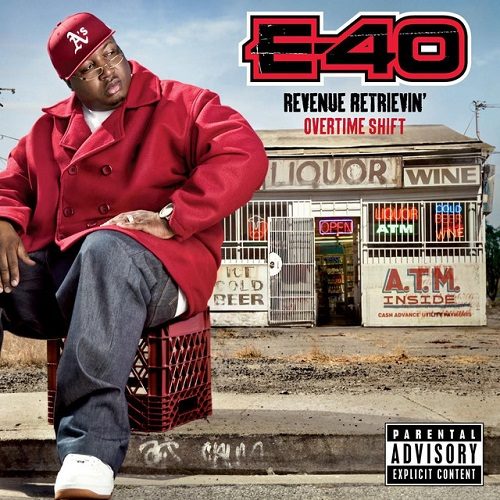 There comes a point in an established rapper’s career where he or she would like to make some sort of statement with a new album. The message isn’t always understood or welcome, but that didn’t prevent Jay-Z, Nas, Common, or Kanye West from crafting longplayers with a certain theme to them. E-40’s recent releases have a theme as well, but rather than varying his approach, he emphasizes his angle. Already pulling a “Day Shift” and a “Night Shift” on the same date last year, he continues the “Revenue Retrievin'” series, this time putting in overtime and adding a graveyard shift to boot.

Putting his money where his mouth is, the actions of this hustler speak as loud as his words. Where others talk a good game, E-40 puts his hustle to the litmus test with not one, not two, not three, but four discs dedicated to the art of making money. To the Bay Area mouthpiece, the premise to have no money and to do something about it has always proven more interesting than to already have money and find exquisite ways to spend it. Physically Earl Stevens may have left poverty behind, but as is characteristic for an old-style street rapper, he keeps coming back to his formative years. In the process, he also revisits his musical past. The rhythmic backbone of several of his latest tracks are the mechanical mobster grooves that were one of the trademarks of late ’80s West Coast hip-hop, specifically its regional, independent branch. Opener “Mr. Flamboyant 2K11” is an update of the title track of the artist’s very first solo release from 1991. “Hillside” transports us back in time to Vallejo’s Magazine Street, as Forty projects flashbacks of small town street life over snarky synths and swift scratches courtesy of Rawsmoov. While the clicking and kicking 808’s of “My Money Straight” accompany him on his trip downstate to meet San Francisco veterans Black C and Guce.

Producer DecadeZ serves up more “sinister mob shit” on “In the Morning” as 40, “outsmartin’ the po-pos, sellin’ dope holdin’ up a ‘HOMELESS’ sign,” leads the way for guests Beeda Weeda and Work Dirty. But it doesn’t get more vintage E-40 than “Fuck Em'” and “Rear View Mirror,” two tracks that show the opinionated, tongue-in-cheek MC in his element, supported by simple but highly effective beats and, in the latter’s case, cousin and longtime mic companion B-Legit. On “Lookin’ Back” the nostalgia takes on a different musical hue as producer Jake One cooks up a warm, smoothly vibing groove and Devin blesses the track with his ageless presence, both inspiring the host to deliver one of the album’s key verses:

“Lookin’ back before YouTube and social networks was founded
A&R’s’d go to the hood to find artists with talent
Recording engineers was low-key lightweight crooks
Not all of ’em but some of ’em’d take all day to fly hooks
That’s how they did it back then, based on a hourly rate
The longer they take, the mo’ money they make
All we wanted to do was rap, young and enthusiastic
Hopin’ that one day our tapes would be in stores shrinkwrapped and packaged
We used to beg the promoters to do us a favor
‘Let us perform for free, pimpin’ – mane, the money gon’ come later!’
[…]
Rehearse and practise, practise and rehearse
Me and Too $hort, Bun and Pimp C wouldn’t charge each other to spit a verse
We all knew what we was worth, future legends up in the game
RIP Pimp C, way ahead of his time
Everybody wanna be that guy, everybody wanna be that dude
but everybody don’t wanna pay dues like 40 and Devin The Dude
Two good dudes, old school but new school
Meet ’em in person, you gon’ say, ‘Them some cool fools!’
Good music still around, just gotta know where to find it
The seasoned entrepreneur independently grindin’
20 plus 3 years deep in this music
People always be askin’ me, ’40, how the fuck is you still doin’ it?'”

While the album ends on one final throwback note, the funkin’ “Click About It” (featuring the “first rap family to go gold”), “Overtime Shift” doesn’t sever E-40’s ties with contemporary sounds. (Or rather the reinterpretation of the sparse but spacey soundscapes intitially designed in the ’70s and ’80s.) Chad Hugo injects an exalted horn break into a modern arrangement of bleeps, whizzes and low end on “Beastin’,” Hieroglyphics member DJ Toure brings out the big bad bass on “Punkin’ Em Out,” Tone Bone gets hyphy with “Gunz,” and Willy Will updates adventurous mid-’80s boom bap on “Movin’ Organized Business (M.O.B.).”

40’s two main producers this year, Droop-E and DecadeZ, team up for “Stay Gone,” whose electrically buzzing, high-pitched bassline is just one of the many variations in the rhythm section of the two albums. DecadeZ delivers a fly sung hook as the Ballatician once more illustrates how he’s always on the move: “It ain’t enough hours in the day to get what I need done / The bread winner of the family, the chosen one / Imagine a car without a motor / I carry the world on my shoulders (…) Don’t nothin’ come to a sleeper but a nightmare / I’m a hustler, not a loser / tryina make our lives better for the future.”

DecadeZ also provides the catchy melodic chorus to the Nonstop-produced “Slow it Down,” sonically one of the songs with the most pop appeal but at the same time another reminiscence, this time to ’80s funk in the vein of Prince. And even when 40 crosses the line to glossy pop, it’s perfectly okay because he instills “I Love My Momma” with the gratitude of a grown son. For more musings of a mature MC, see also the soulful, Sean T-produced “Born in the Struggle,” peppered with Cornel West soundbites and real-life details:

“I had to hand-wash my clothes, didn’t have a washing machine or a dryer
Momma used to have to hang her period panties out on a clothes line wire
‘The vacuum broke’ – ‘Use the broom
We got company comin’ over this afternoon
You know our family like to gossip
Clean up your room, throw everything in the closet’
I like to talk to the old schoolers, OG playas
cause they was my age – I ain’t never been theirs
I count on ’em for guidance, leadership and advice
cause everything I’m goin’ through they done been through twice
or three or four times, five, six, seven, eight
We can learn from they mistakes before it’s too late
Communication is everything, conversation’s abandoned
People die every day because of misunderstandings
The highs and lows, the ups and downs
Pissy sidewalks, human shit on the ground
The ins and outs, whys and won’ts
History repeats itself, opportunities don’t
Sad true story, unintentionally, not on purpose
Only time I see my family’s at a funeral service
Her stomach keep hurtin’, but she didn’t bother
cause you and I both know that black folk don’t like to go to the doctor
One thing about us, mane, we creators
And at the end of the day we all related
through the slaves and the Indians and natives
They brought us here on a boat, whipped us and raped us
Scraps from a pig they gave us
So we grub pork chops, chitlins, ribs and bacon
Fucked around and got addicted to swine, which wasn’t ‘posed to be
Now we love it, in our mind it’s a delicacy”

An E-40 record has rhyme and reason and technically it ever so often is a spectacular event. After 20 plus years in the game, however, you’d expect the Ambassador of the Bay to be able to come up with more arresting song concepts than “Gunz” and “Drugs,” who do look at their respective subjects from different perspectives but ultimately fail to make a statement that would justify their definite titles. Speaking of, “Me & My Bitch,” one of the most intriguing offerings here, deserves a more meaningful title than one jacked from a dead legend. Also, while the message of “Tired of Selling Yola” is noted, rap discovered that sentiment a long time ago, which adds to the notion that E-40 2K11 is not about breaking new grounds.

“Overtime Shift” is E-40 prolonging his usual grind. It wholly proves the point it’s trying to make, the man with “one of the longest runs of any rap career” speaking with an urgency and conviction your average instant rap star lacks. Fans of Forty will no doubt embrace this release, others will not just have to respect the hustle but also the passion and craftmanship.