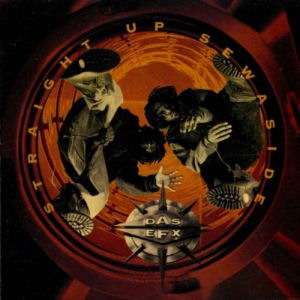 In 1992, Das EFX released their debut album “Dead Serious,” a soon-to-be hip-hop classic thanks in part to their carefree approach and unique rapping style that saw the suffix “-iggedy” spread throughout the lyrics. With tongue-twisting rhymes and sample-heavy beats, Das EFX, in their own words, “riggedy rocked” the mic, creating a sound unlike any other at the time. “Dead Serious” would ultimately prove to be the most successful and most popular album of the duo’s career, but this does not mean that the rest of Das EFX’s catalogue should be ignored. I myself am guilty of falling prey to this trap, and while “Dead Serious” ranks among my favorite hip-hop albums of all time, until recently I had barely explored any of the group’s later work. Thus, when I noticed that RapReviews had also largely overlooked Das EFX, covering only “Dead Serious,” I figured this was my opportunity to explore subsequent albums and see what else Drayz and Skoob had in store, and what a better place to start than their second release, “Straight Up Sewaside.”

With only a year and a half in between Das EFX’s debut album and “Straight Up Sewaside,” upon first glance it seems as if not much has changed. The chemistry between Drayz and Skoob which made “Dead Serious” such an enjoyable listen is still present, and the two emcees play off each other’s lyrics seamlessly, allowing no room for any guest appearances. The production style remains as well, as Das EFX needs no more than a hard-hitting set of drums, a driving bassline, and a chopped horn or trumpet sample thrown in here and there to showcase their lyrical velocity. And thankfully, the same creative similes and comparisons still pepper their rhymes, including, but certainly not limited to, “I rock it like NASA,” “Ya phony, full of bologna like Oscar Meyer,” and “I roll two spliffs, so I guess I’m double jointed.” It is truly entertaining to try and keep up with all the pop-culture and historical references that the duo comes up with, beginning with the first verse on the opening song, “Undaground Rapper,” where Drayz and Skoob rap:

“Holy smokes, cheerio chap, I’m makin’ toe taps so watch the birdie
Now check it how I wreck it like a demolition derby
With the Books, oops tutz, I used to live on Bedford
But now I rocks the microphone and chill like Robert Redford
So bring it ’cause I can swing a kid like Reggie Jackson
I got the backs ‘n’ bones but now I needs some action
Aiyo you can call me Plato because my style is in there
And I’ll dig in that anus, man, as if my name was ‘swimwear’
See I rock a hoodie sweater, more wood than Woody Pecker
I twist it like an ankle, G, or maybe Chubby Checker
In LA I hit the chronic, I’m super like the Sonics
I jab you with the left and swing a hook without the phonics”

Despite these upbeat references and rhymes, there are times when the lyrics and beats turn dark and aggressive, almost as if Das EFX have something to prove. Over a heavy drum loop, Drayz and Skoob launch into a tirade against whack emcees on “Check it Out,” with rhymes such as “Here I come so nigga don’t be hatchin’ it, I’m snatchin’ it, niggas o’dose when I catch this/ Niggas in the dark, I spark at them like I was matches.” And on “Kaught in Da Ak,” which features an eerie piano loop over a creeping bassline, Drayz spits a menacing verse full of frustration that is simply not present on “Dead Serious,” rapping:

“Well, umm, take this job and shove it
punk fuck it, another day of workin’
My boss is on my back and I’m about to go berserkin’
Catch a fit money grip cause pumpin’ gas is a bitch way
Niggas be ridin’ by my job and frontin’ like they bitchin
I wanna bust with disgust cause I’m sour
Takin’ all the shit and only getting’ four dollars a hour
There go some bitches swearin’ that they better
Givin’ a cold shoulder as they roll by in the fuckin’ Jetta
I gets no pay though cause they know that you know
Can’t wait to take a fuckin’ break so I can go and puff this buddha
I’m bustin’ my ass but my cash just ain’t stockin’
Now who’s this creepin’ up the fuckin’ block-in?
Clockin’, lookin’ like he really wanna test this
Just another dick, I oughta stick him for that Lexus”

These songs, though, are somewhat of a deviation from the rest of “Straight Up Sewaside,” and there are still several tracks that embody the more lighthearted feel that is reminiscent of “Dead Serious.” “Rappaz” features a laid back jazz trumpet sample on the chorus, as well as a steady drum loop and a funky bassline that is perfectly suited for Das EFX’s flow. Other tracks, such as “Freakit” and “Baknaffek,” also stick to the formula that works best for the duo, with little more than a drum kit and deep bass to lay the foundation for Drayz and Skoob to boast of their skills on the mic. Perhaps this is best embodied by “Gimme Dat Micraphone,” which features a sample from “Funky Granny” by Kool and the Gang, as the duo raps:

“I makes ’em wheeze up, cause when I ease up, I eat MC’s up
I leave ’em on their backs layin’ flat with they knees up
Eureka, musta speak uhh, re-aversin’ person
No rehearsin’ I can flip it in reverse and
change ’em, rearrange ’em, supa-dupa
Faze ’em, daze ’em and blast that ass with different days-in”

Despite all this, though, as much as I tried to ignore the feeling, I couldn’t help but think that there was something missing from “Straight Up Sewaside.” Maybe it’s the fact that Das EFX dropped the use of “-iggedy,” and in doing so lost some of the upbeat feel and comical value of their lyrics. Maybe it’s the fact that their unique, fast-paced delivery doesn’t sound as fresh the second time around. While it may be unfair to compare every subsequent release to “Dead Serious,” the bottom line is that Drayz and Skoob set the bar high with their debut, and while “Straight Up Sewaside” might stand alone as a solid album, it simply doesn’t quite measure up to this standard. Fans of “Dead Serious” should not hesitate to check out Das EFX’s second release, but just don’t go in expecting the same level of entertainment, and instead accept “Straight Up Sewaside” for what it is: a solid follow-up album, nothing more and nothing less.