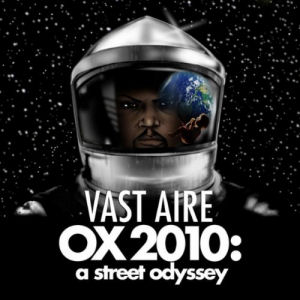 Ten years ago, Vast Aire and then-partner Vordul Mega released the classic underground hip-hop album “The Cold Vein” as Cannibal Ox. Backed by the android beats of El-P, Aire and Mega dropped rhymes that mixed Philip K. Dick sci-fi paranoia with gritty street tales. The result was like the Wu-Tang Clan only with science fiction as a backdrop instead of kung-fu: gritty, chilling, and imaginative as hell. While the duo has never officially split, the follow-up they promised five years ago has yet to materialize, and both MCs have tried to come out from behind the CanOx shadow as solo artist. Vast Aire dropped the well-received “Dueces Wild” and less satisfying “Look Mom…No Hands.” He also teamed up with Karnegie as Mighty Joseph for 2008’s “Empire State.” Vordul Mega’s “The Revolution of Yung Havoks” and “Megagraphitti” got mixed reviews. “OX 2010” was announced two years ago, but is just now getting released.

“The Cold Vein” looms large over this disc. For one thing, Vast Aire is explicitly referencing it, both in the title, the beats and subject matter, and his reunion with Vordul Mega on “Thor’s Hammer,” which I’ll get to in a minute. For another thing, almost everyone who listens to this album is going to have their opinion of it colored by how they feel about “The Cold Vein.” Either it’s not going to compare, or we’ll have such fond memories of the older album that we’ll like this one by default. Either way, it’s hard to appreciate “OX 2010” strictly on it’s own merits.

Things get off to a rough start. The intro tries to emulate “2001: A Space Odyssey,” but between the clunky writing and Aire’s thick New Yawk accent, it comes off more like an episode of “Lazer Cats,” the hopelessly terrible sci-fi movie Andy Samberg is always pitching on “Saturday Night Live.” Self-serious and unintentionally funny: not a great way to get things going.

The space theme permeates the album. Aire is sticking to the subject matter that put him on the map, continuing to wed sci-fi mythology with New York grime. El Product is M.I.A. on “OX 2010.” Like Raekwon did on “Cuban Linx II,” Vast Aire makes up for the absence of the producer who made his debut album by enlisting a variety of producers to make beats that are similar but different. Ayatollah, J Zone, Harry Fraud, Kount Fif, and Thanos all contribute tracks to the album. About half the beats stick to classic hardcore NYC hip-hop, as rough and grimy as a South Bronx alleyway. The other half go in more futuristic vein, like on “The Cannon of Samus,” which builds a beat over what sounds like the intro to the Nintendo game “Metroid.” “Nomad” has it both ways, with a dirty sci-fi beat worthy of El-P.

Cannibal Ox fans will no doubt be eager to hear the mini reunion on “Thor’s Hammer.” The good news is that Raekwon and Aire both drop solid bars and have complimentary styles, and Mega’s rhymes are serviceable if a little phoned in. The problem is that there is no heat or chemistry in the delivery. The beat is interesting but subdued, and you get the sense that all three verses were recorded separately and then edited together later.

Cappadonna and Guilty Simpson’s guest spots work better, mainly because they have more energized beats to work with. Simpson’s Detroit style is a nice contrast to Aire’s flow on “The Verdict,” and Cappadonna brings some more Ox-Tang Clan on “I Don’t Care.” There is also a Mighty Joseph Reunion on “Almighty Jose.”

For the most part, the production and rhymes are solid, if not totally earth-shattering. The only real mistake on this album is the corny “Horoscope,” the millionth failed attempt at a hip-hop love song that mixes tender-but-embarrassing rhymes with a new age beat. Vast Aire has a commanding flow, which gives everything he says a feeling of weight and importance, even if the actual lyrics don’t always warrant the gravitas.

So do you cop this, or do you give it a pass and revisit “The Cold Vein” instead? If you like the Cannibal Ox sound, and want to hear 90s NYC grime done 2011 style, then “OX 2010” is worth the investment. Aire’s futuristic spin is a nice diversion from the standard hardcore East Coast sound that is frankly showing its age. At this point, Vast Aire is sort of like the indie Ghostface: a distinctive MC with a particular style that is beloved by his core audience and ignored by the masses. “OX 2010” might not break Vast Aire into the mainstream, but it will make his fans happy.