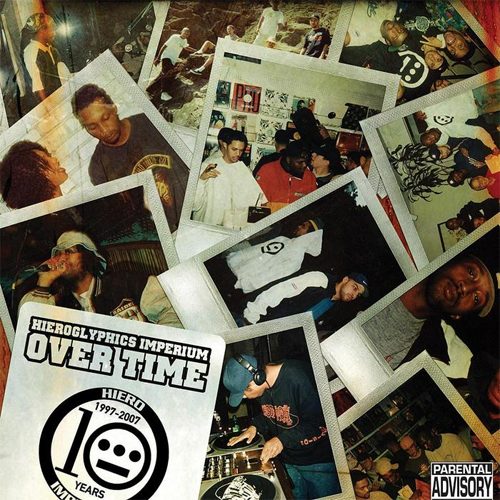 “Over Time” is possibly the most appropriate title of a hip-hop album in a long time. The Oakland-based emcees that comprise the Hieroglyphics have been doing their thing over time, since they dropped their landmark underground album “Third Eye Vision” back in 1998 and even before that. The issue that arises with multi-person groups over a stretch of over a decade is getting them back together to drop an album after each one has taken the solo route and expressed their own artistic vision, especially considering some of the strange, but successful diversions of Del tha Funkee Homosapian. One can only wish that it is all love in 2007 that brings Del, Souls of Mischief, Domino, Jay Biz, Casual, Pep Love, A-Plus and Tajai together for another go, but really what we get is mostly b-sides, remixes and rarities that compile some of a landmark group’s hottest joints “Over Time”.

The Hieroglyphics, if you’re not fresh to them, can sort of be considered the underground version of Wu-Tang. They are a large group that have been laying it down by their own merit since 1991. As stated, as a group, the big breakthrough was “Third Eye Vision” in ’98–this is the time when you would start to see the icon of the straight-mouthed smiley face with three eyes on t-shirts and posters, particularly on the west coast. However, when comparing them to their east coast counterpart of the Wu-Tang Clan it needs to be noted that the Hieroglyphics have branched out in a different direction than those Shaolin emcees. The Hieroglyphics have commendably stuck to their unrestricted, battle-driven, style of rap without sacrificing themselves for commercial appeal–when was the last time you heard ALL of the members of the WU get together and rip a track infused with kung-fu samples? Unfortunately, it has been far too long and that feeling lingers on this release too.

The subject matters that the Hiero spit about are usually focused on the love of music and their own abilities and stray away from the violent cancers of society. Basically, all of this wraps up into a nice neat package and I could go on forever explaining how Del’s space-aged slang compliments Pep Love’s erratic Pharoahe Monch-esqe flow, or how the simplistic production, often supplied by A-Plus, is like silk when combining it with Casual’s effortless style. But, you don’t get much of this when listening to “Over Time” as 6 of the tracks are solo efforts and others are b-sides and rarities–however, on sheer skill this album holds up as one of the better albums so far in ’07, albeit not a proper reunion.

Any Hieroglyphics fan will immediately fall in love with this album when popping it into their deck and hearing the Domino-remix of “You Never Knew” hit the soundscape to kick things off. “You Never Knew” was one of the finest joints on the breakthrough album of “Third Eye Vision” and it only gets better with a sample of J-Live’s “Like This Anna” and some sonically profound guitar licks for the 2007 facelift. The song features clever lines that exemplify the dexterity of the group such as; “It’s Hiero yo/It’s not a wrong thing to be addicted to microphone like a Her-oine fiend!”, “But we ain’t trippin’ ,give respect when you see this, you need this, all those other raps are underdeveloped like a fetus” and “Hieroglyphics, hip-hop is vintage, underground like silos, launching long-range ballistics”. There is honestly too many of ’em to pick out, but it is straight rippin’ a track to shreds for 4:30 with no exceptions. It is a head-nodding start to the album and remains to be the highlight of the album.

“Masterminds” that follows, does a great job of showing the artists’ ability to trade off lines. The dramatic, howling, symphonic background is a loop that gets lost in subtlety when listening to the razor-sharp linguistics. This is one of those tracks that really feels like a battle track. It will remind hip-hop enthusiasts of Cunninlyguists’ “Southernunderground” album, with one-liner quotables like, “I leave that ass twisted, like those hicks in ‘Deliverance'”. The best part of Hieroglyphics comes to light with a track like this, because it is music that any rap fan can relate to or appreciate.

The album starts to take more of a individually driven route when approaching the middle. This is not a bad thing, as Pep Love’s “Prose Officially” is a minimalist beat that is accentuated by the featured artist. The songs that focus on single artists bring out the best in them and remind you to go pick up their solo offerings. Pep Love’s “Ascension” can easily forgotten by those with short-attention spans, but it is one worth picking up with no hesitation. Later on “Over Time” is a remix to the song “Fight Club” from the quintessential release of “Ascension” as well.

There are a few, very few, songs that won’t have you pulling your jaw off the floor–For instance, “Phoney Phranchise” just doesn’t seem as original as the other cuts. It’s just an average joint overshadowed by great ones. “The Scandle” falls victim to the same fate, as the beat is muddled with too much noise. Overall, these very slight missteps get overshadowed by the optimism that this album presents and when a listener is afraid they might get bored with it, then comes another scorcher.

“They slippin’, dippin’ in and out, in their shadow
By night fall, all of this is swallowed
With these emcee’s down to do battle
Because when the sun shines, they got to follow”

The chorus is just right for the mood of the atmospheric song and keeps things moving in a proper direction.

The whole album moves in a proper direction, in fact, with the exception to the fact that this group of dope emcee’s did not really come together to bring us something completely new. What this album does do successfully is motivate fans of Hieroglyphics to go pick up some of the multitude of solo joints that have been released in the past decade and a half, which will bring the realization that all of these guys that create the collective are real mic ‘prose’. It will also serve its purpose in recruiting rap fans of the new era to appreciate true, essential, underground hip-hop, if they will just give it a listen. Maybe, “Over Time” we will hear more fresh new material, but for now this will more than suffice.