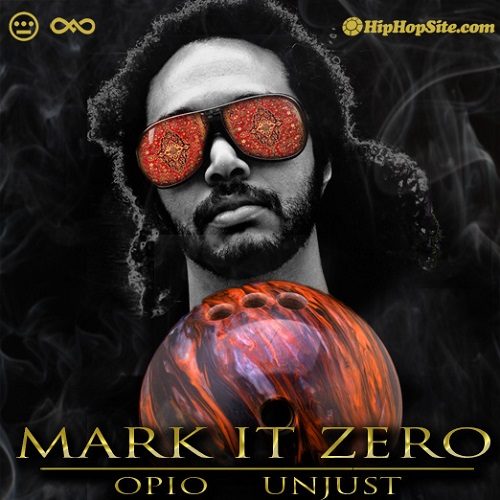 One of my favorite albums of 2010’s first quarter was Donwill’s “Don Cusack in High Fidelity,” a clever record which adapted one of my favorite films, “High Fidelity” starring John Cusack, for the hip hop full length. It appears that veteran Souls of Mischief and Hieroglyphics rapper Opio and his friend Unjust, producer of the new Hiero-affiliated group Chosen Few, were similarly inspired by a turn-of-the-century blockbuster comedy and recorded “Mark It Zero: The Big Lebowski Tribute Album” in celebration of the Coen brothers’ 1998 cult classic starring Jeff Bridges and John Goodman. Available 4/20 as a free download, “Mark It Zero” aims not only to provide a suitable soundtrack for the herbalists’ favorite holiday but also serves as a prelude to upcoming projects from both partiesâ€”Opio’s “Vulture’s Wisdom Vol. 2” and Chosen Few’s “New World Symphony”â€”both slated for May 25.

Unlike Donwill’s “High Fidelity” tribute, which stuck meticulously close to the film’s plot, “Mark It Zero” might more accurately be characterized as music inspired by the film. The press release states that Opio’s rhymes entail “subject matter that is loosely based around their own â€˜dude-like’ adventures” and Unjust’s beats are completely sampled from the movie’s acclaimed soundtrack. This is an intriguing concept especially from a musical standpoint simply given “The Big Lebowski”‘s whimsical score. Arranged by Carter Burwell, the original soundtrack made extensive use of otherworldly string arrangements, eerie percussion, and oddly nostalgic pop tunes for the drug-induced dream sequences and disorienting tribulations of The Dude’s rug saga. Unjust, in turn, finds plenty to work with and crafts expansive, sinister beats with some elements identifiable and others wholly unrecognizable. What’s most surprising, then, might be how much the music sounds like classic Hieroglyphics materialâ€”even with the limited canon from which to draw his music, the beats still emit the signature laidback Bay Area vibe and distant, eerie quality of a Souls of Mischief record.

Opio turns in a memorable performance himself, spinning blunted tales and piecing together clever skits with clips from the movie. Ope is one of those eternally underrated rappers who despite nearly two decades on the scene and classic material to his name never seems to get his deserved respect as a phenomenal artistâ€”while many are familiar with the brilliance of “’93 Til Infinity,” few are familiar with his latter day solo albums, each of which cracked RapReviews’ coveted “The Nines.” While it’s clear “Mark It Zero” may be a bit of a self-indulgence, it’s a lot of fun for the listener too, and it’s a lighthearted, good-natured listen. Ope’s likable, laidback canter flows seamlessly over the smooth beats as he spins his left coast yarns.

While Opio tends not to make direct references to the movie in his rhymes, he often draws on sentiments through use of vocal clips or lines crafted into hooksâ€”for example, The Dude’s avowal that “This aggression will not stand” on “Aggression” and Walter’s furious “You see what happens? This is what happens!” on the appealingly paranoid “What Happens,” where he shines over an atmospheric beat. His complex bars and wild references create a vivid mood that matches Unjust’s. After the head-spinning verses of “Yeah” comes the standout “Aggression,” which draws a brilliant violin sample from the scene at Jack Treehorn’s Malibu house. Ope raps:

“I be swervin’ off scotch, burnin’ pot
While my thoughts keep turnin’ into real life
I feel like I gotta keep learnin’
Cause a lot of these Nazi Germans in plain clothes got me yearnin’
For more knowledge, plottin’ on revenge and justice
Aim for the brain so it don’t get redundant
Caught him in the park like a scene outta French Connection
Fleaflickin’ this direction, niggas in the party with the pistol and vests on
Stressin’ off the economics, feel the depression
No question, screamin’ like a hundred DMX’s with techs
Feels sicker just to reflex
Check, and I’m an underground king
Come around me, you might learn about things
See, I’m on my Ps and toes
Fraudulent foes be the reason though, increase the soul”

The brief and poignant “C’mon” and “World of Pain” feature sharp verses from Ope and powerful production from Unjust, and the closer “Far Out” is classic Opio.

“Mark It Zero” is only twenty minutes long but has more than enough material to fully endear it to fans of the film, and those who haven’t seen it will probably like it just as well. In these trying times, can one afford not to check quality free music from as reliable a rapper as Opio? The Dude abides.