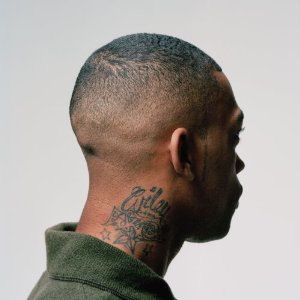 “I’ve got beats and flows, stadium shows, so I’m here doin it right
Nobody knows if it’s gonna work overseas, but you wait until I try it
I get the flag and fly it”

Professing to be the Lord Byron of rap, Richard Cowie a/k/a Wiley is the latest hip-hop artist in a continually evolving and growing UK scene with aspirations to hit it big outside of the big island. Linking up with Big Dada Recordings is a good start, as they’re a subsidiary of the Ninja Tune label, which has had a strong internationally going all the way back to 1990. Wiley is also very D.I.Y., reflected in both the title of “100% Publishing” and in his attitude about producing almost the entire album himself. That’s an ideal way to control the quality of the end product coming out and to also reap the most profit and royalties from it.

Of course taking on “100%” means that you’re just as responsible for when things go well as when things don’t. Let’s start with the positive – although Wiley has a strong English accent, it’s not so strong that U.S. or other international listeners shouldn’t be able to follow it. If he sounds slightly Carribean in the process, that’s not a coincidence, and he talks about his multi-cultural background on the song “Your Intuition”:

“Wiley, at Morris my agent’s name is Billy (Bill)
And my family come from Trini (Trinidad)
Dad knows that I’ve been a bit silly
But he didn’t make it any easier now did he? (No)
No, I’m the King of a City
I’m happy, Scatter met Dibby (yeah)
I +Bang Bang+ but my name ain’t +Chiddy+
Pardon ‘Ye West, but you can’t come with me”

Wiley has a confident, cocksure and a bit Cockney flow – all of which are in his favor. Like many of today’s nouvelle hip-hop artists and European imports, he also favors a higher BPM and a little bit more electronic sound in his production. In that regard Wiley is more than several steps above the average unsigned artist releasing GarageBand dub tracks, and has clearly made music he’s comfortable performing in front of crowds on tour. Here’s where the “100%” will haunt him though – he’s clearly an interesting emcee with a good gimmick but his beats at best pigeonhole him and at worst do him no favors. Songs like “I Just Woke Up” aren’t poorly produced, they’re just not interesting. The bare bones fast moving drums make him very easy to understand but also make the track very skippable. “To Be Continued” has the opposite problem as he’s trying so hard to be impressive by layering up multiple levels of sound that it seems he slagged off the lyrics – rhyming “see me” with “TV” and “Mario and Luigi.” Not his best vocal effort.

The problem for Wiley on “100% Publishing” is that things just vary too wildly from song to song. Some are outright annoying – the circus instrumental for “Boom Boom Da Na” being the kind of thing I never ever want to listen to again nor should anybody else. On the other hand the slow pace and round bass of “Pink Lady” are pleasantly reminiscent of Tech N9ne, and the minimalistic electronics of the tongue in cheek “One Hit Wonder” work quite nicely. There’s a lot to like about the Lord Byron of rap other than the fact that contrary to his own belief he really HASN’T figured out what exactly it is he wants to be. To the ear of this critic it really sounds like he ought to bring in some outside producers, even if he doesn’t want to share publishing, and he might truly reach that next level of international success.