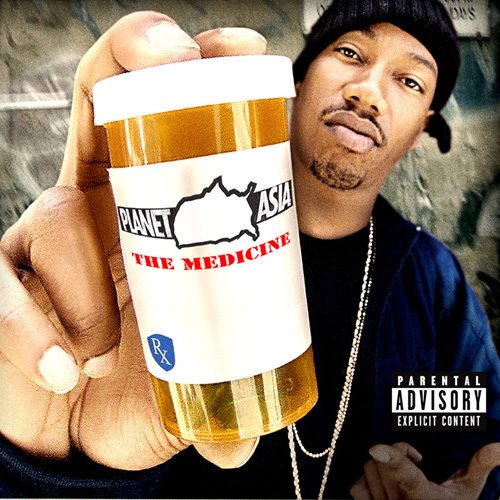 As one of the most respected West Coast underground MCs in the game, Planet Asia has definitely earned his cred with a slew of releases consistently consistent. In other words, pretty much everything dude touches is dope. With lyrical styles that have been (or could be) compared to everyone from the GZA, Inspectah Deck, Kurupt or even Black Thought, Asia at his best combines Rakim mathematics with the mysterious coded wisdom of the Wu, all flavored with distinct West Coast flavor. So what’s the problem?! Well, the first is that being so consistent for so long (since ’98) creates a sort of lose-lose situation for an artist: either he can stick to the script of dopeness that’s carried him this far and risk sounding unoriginal, or worse, irrelevant. Or, he can begin to experiment with new sounds, collaborators and subjects; in which case, he’ll probably be accused of leaving his devoted fans behind and/or indulging in mindless experimentation (3000, hold ya head). Of course, the best veterans grow organically while still keeping their artistic and conceptual foundations. Enter “The Medicine,” Asia’s third and final installment of “The Medi-Cali Trilogy,” a mixtape-like series that uses a single producer on each installment (see “The Sickness” review for commentary on the first in the series). For this go-round, P.A. uses his fellow Cali underground favorite Evidence from Dilated. Allowing himself the spaciousness to experiment that a threepart format allows, while sticking to the more traditional sonic landscapes of his like-minded comrade, Asia partly succeeds in avoiding the veteran conundrum, but that partial success means he also partly fails in both arenas. Simply put, “The Medicine” is largely bread-and-butter Planet Asia, which can be both affirming and stale; it is also occasionally bold and new, which is both refreshing and tedious.

Lyrically, Asia hasn’t switched up his flow much since the get-go, but that’s just fine with me. He’s still capable of bringing a whole album of full, satisfying, complex verses full of knowledge nuggets, self-affirmations and boasts, and assured delivery, as the comparisons listed above to others MCs like GZA and Kurupt aren’t meant to be derogatory, but genuine. Asia knows how to ride a track â€˜til the wheels fall off (as on “That’s On Me”) and how to get in between the cracks of the beat, playing with the rhythms (as on “Stick and Move”). I could take the time to quote one of his more impressive verses from this release, but really, they’re all so ridiculously satisfying that picking one from the masses wouldn’t do justice. As for the numerous guest artists, things aren’t as magnificent. Many are no-names (and, apparently for good reason), and while some choice veterans (like Rasco and Defari) deliver the goods, others (like Prodigy and Black Thought) underwhelm with forgettable write-ups that come and go. By sticking to the script of his previous “Cali-Medi” releases, P.A. continues to bring the heat but falls into the same traps of weak guest raps and a few joints that are weakened by mundane concepts.

On the boards, Evidence comes with his usual solid work. If you like that Dilated shit, you’ll like this disc, and vice versa. Some tracks are slightly limp, while there are also definitely at least a handful of bangers. So while “In Love” has a pleasant guitar that loses out to a lazy drum loop bordering on soft rock mundanity, the murky horn loops and hand claps of “Get Down or Lay Down” are pure adrenaline on tape. Evidence has always sounded best when he’s sounded epic.

After several listens to “The Medicine,” the truest thing I can say about it is how satisfying the album is as a whole. It’s gratifying first to hear such a hero of “real” Hip Hop still making quality music with his full capacities. Evidence’s unified production gives the project a complete feel that most mixtapes sorely lack. And Asia sprinkles his underground stew with just enough of everythingâ€”yes, there is liberal talk of hustling, drugs, pimping and platinumâ€”to keep all but the most mainstream rap fans happy. Seriously, if P.A. is still considered underground, then either he’s the most commercial backpacker this side of Kanye, or categories like that are no longer necessary or even valid. I prefer to side with the latter theory, as Asia showcases that being independent does not mean being broke. And though some of his attempts at creative and entrepreneurial expansion are rocky, you got to respect the cat’s hustle, his desire to stay significant after all these years.