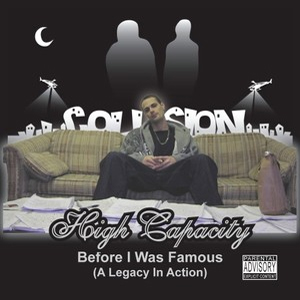 High Capacity :: Before I Was Famous (A Legacy in Action)

Uncovering the passion for hip hop at a young age, Michigan’s High Capacity knew what he was inclined to do with his life-be part of the rap game. While striving to make music beyond the sounds of radio-friendly tracks, High Capacity became more and more involved in the freestyle scene and eventually partnered up with LOK in 2005 as the group, Collision. With aid from B and E Productions, the team released underground albums in Michigan such as “The Funnel Lives,” “Unit Movers,” and “Underground Sessions.” This time around, High Capacity ventures out on his own with his solo debut project, “Before I Was Famous (A Legacy in Action),” as three long years of “blood, sweat, and determination” are put to the test.

It’s interesting how High Capacity refers to himself as being “unimpressed with the Puffy’s and Mase’s,”, but ends up putting himself in that very same category with many tracks in “Before I Was Famous.” With continuous references to the gangster life and the importance of making money, High Capacity lacks the innovation one would hope for in a solid underground album. As “Keep Pimpin'” featuring LOK begins with a rather awkward beat of cartoony horns, High Capacity goes into detail about how “it’s about time to educate these hoes, let them know how we get down.” Unfortunately, the track doesn’t get any more appealing as his aim is to “get your fame, get your money, get your bitches.”

Reminiscent of many radio tracks that glorify the life of a gangster with the added vocals from a singer, “G for Life” featuring vocalist Robert is yet another track that fits into this category well. A predictable track that is so similar to many songs I have heard before, “G for Life” is another gangster anthem full of references to drinking, partying and women. Following suit, “Definition of a Hustler” shows how High Capacity is a different kind of hustler who is driven and ready to make the dollars when the time comes. Although “Before I Was Famous” was meant to stray away from the radio-friendly crowds, but seems unsuccessful in doing so, High Capacity boasts that he will never fall victim to the mainstream scene as he says:

“These days
Everybody want to come out like they Scarface
But very few could do it +Big+, you ain’t Tom Hanks
You watch the world from the confines of MySpace
But I’ve been writing these rhymes since back in 9-8
Before Eminem was signed with Dre
Before the bling bling happened
I was on the Casio
Contemplating rap while you were playing ‘Super Mario'”

With this gangster lifestyle in mind, High Capacity shows that you have to do what you have to do in order to get yours. As “I Gotta” featuring LOK and The Tyrant touches upon the importance of money, simple piano keys begin “Root of All Evil” that exposes the lengths that need to be taken in order to pay the bills and how having a large amount of money is extremely satisfying as he says:

“The love of money is the root of all evil
Them haters just mad what it do to y’all people
I need it in my hands
‘Cause without it I’m lethal
So I guess you could say I’m what you would call evil
I’ll put it to you like a pro, but my money’s still low
And I ain’t trying to whine and complain
That this damn life has more to show
And more paper for the fact that I record my soul”

The numerous club tracks throughout “Before I Was Famous” further validate the lack of underground sound that High Capacity originally had hoped for. The Asian inspired beats of “Night Spot” features Spider Black and Yogi as it doesn’t get more mainstream than this. The hook features female vocals calling out to all the players who need to show their money if they plan to stick around the club. With overused electronic sounds, “Like Damn” is another club track that lacks in lyricism and subject matter. High Capacity puts himself in the scenario of trying to woo a woman at the club and reverts to oversimplified rhymes such as “mami can you fit me into your plans/like damn/how you fit that booty in your pants?” Classy isn’t it?

I want to like High Capacity for many reasons. The potential is apparent, but when an artist claims that he takes prides in making true underground tracks and instead, delivers mainstream sounds over and over again, it is absolutely appalling. High Capacity’s “Before I Was Famous” could have been something more substantial if the right beats were used and the subject matter was toned down, but it lacked in so many areas. Without a doubt, High Capacity knows how to lay down a sixteen, but the question is if he knows what to do with them in the end.

High Capacity :: Before I Was Famous (A Legacy in Action)
5.5Overall Score
Music5
Lyrics6