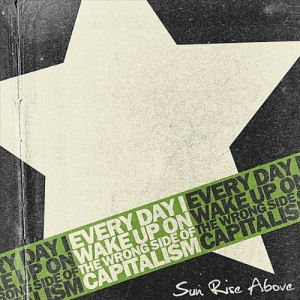 Sun Rise Above :: Every Day I Wake Up On the Wrong Side of Capitalism

Here’s an important question to consider while you’re reading this review: if you sold a million albums and became a household name while decrying capitalism, would your newfound wealth be hypocrisy or dumb luck? Can you bash the system, like Rage Against the Machine, while profiting from that very same system? “I’m the voice of the working poor, laboring for minimum wage
Like men in a cage, I’m the memory of slaves
Never forget I’m like, what a typhoon is to waves
In effect like gravity, on your ass as you age
On the mic I sound like a million rats in a cage
Trapped, trying to find a way out and scratching in vein
I’m the rafts that show up after it rains
I’m the scars that appear on your body after the pain
[…]
So I could give a FUCK less about MTV player
I’m the virus that formatted your MP3 player”

Sun R.A. a/k/a Sun Rise Above goes out of his way to look like Che Guevara in his biography photo – sunlight peaking over his shoulder, scruffy beard, unzipped (possibly military issue) jacket and cap on, all defiant and Marxist, looking ready to lead a proletarian revolution. RR writer Emilee Woods described Sun as “a highly politicized rapper” and that assessment fits him like a glove. What I’m not sure of initially is if he’s also pretentious, even though the lengthy album title “Every Day I Wake Up On the Wrong Side of Capitalism” implies that he doesn’t know how to pare down words when necessary. Since I often critique my own work as having the same flaw, I won’t hold that against him too much. He’s definitely not paring down the album length though, as a total of 22 tracks rail against the evils of the first world economy. Titles like “The Anti-Capitalistic Mentality” are baldly self-explanatory:

“I hate bosses, but I love working folk
9 to 5 survive still find time to laugh and joke
Of course I love good times, I hate the bad
I rock hip-hop, you gotta stop chasin fads
Makin that trash rap clowns get smacked down
Chest left with 7 wounds, goons on a crack down
I love nice things but sure hate the high prices
Icy rings, bling blood diamonds in the club shinin”

The 7Wounds produced track does have a soulful R&B backdrop that fits the track well, with a constant background refrain of the words “love and hate.” He only does one other song for Sun, but “Surrender” has a pleasantly minimal backdrop for a track where Sun offers anything but a white flag to the world. The majority of the album is laced by KP, and he’s got a good handle on mixing vocals and melodies plus a good ear for beats to break. The ebony and ivories of “Stockholm Syndrome” are nice, the melody of “Incarceration” is a hypnotic headnodder, and “What’s the Point?” is so smooth I honestly expected Talib Kweli to jump on and spit bars too – too bad it’s only 94 seconds long.

That’s one of the interesting things about Sun – all but five of his songs are under three minutes long, and only three are longer than 210 seconds. The brevity keeps things moving and helps to prevent his anti-capitalistic message from becoming overbearing, even though occasionally you might actually want a beat to last longer. The Rendesten produced “Mon River Flow” just barely gets going, and then at 38 seconds it’s already over. KP’s “Memorial Day” beat is billed as an interlude but it’s actually longer by 12 seconds, and both songs have Sun dropping bars. Even when he does go longer, I don’t find myself tiring quickly of the music or message. X3M’s work on “The Human Cost” helps to soften the blow of the harsh message Sun delivers:

“Nature is the mother, labor is the father
Capitalism’s a rapist, just straight rakin it all in
They ballin, the top five percent has got a lot of rent
While I ain’t got a single red cent, so I’m dead bent
Liquor in my liver’s like religion in my brain
Helpin me maintain cause I can’t withstand the pain
Drain, my blood like vampires, my man fired
for being minutes late got him in a mental state”

Now hopefully you’ve been considering the question from the opening paragraph very carefully, because Sun Rise Above needs to be thinking about the very same issue closely. There are times when I personally identify very strongly with anti-capitalistic themes, and I rate albums like The Coup’s “Kill My Landlord” and “Steal This Album” as among my favorite albums. If one were to compare Boots Riley and Sun R.A. though, Boots has two qualities that Sun does not: a dry sardonic humor and deep emotional resonance to the topics he discusses. Boots was a revolutionary by necessity, growing up in an environment that sought to destroy him, whereas Sun sounds like a revolutionary by choice. That’s not a negative per se – history is replete with revolutions that started among the middle class who were fed up with being trampled on by their own government or monarchy. When one spits righteous rhetoric though, the message can get lost in translation.

Imagine your favorite political firebrand rapper in a music video where he stepped out of a Bentley flashing a big gold Rolex. Now some rappers could do it for irony to make a point, but there’s almost no way Sun can talk about “bashing the system/smashing the prison walls/pound ’til it all falls down” and get away with being anything other than the revolutionary his bio and artwork portray. He’s artistically painted himself into a corner that without the humor and wit of a Boots Riley, the booming oratorical power of Chuck D, or the deeply philosophical thoughts of Kris Parker, he simply can’t get out of. There aren’t enough tools in his shed to dig his way out of his OWN prison, making Sun both enjoyable for his dedication to his beliefs and a one trick pony when he doesn’t have anything else to say. There are momentary flashes of humor on the album though but they’re not his – they’re from comedians and comedic actors delivering diatribes about America. That’s telling.

“Every Day I Wake Up on the Wrong Side of Capitalism” will stay an underground album for all of the above reasons, and for Sun Rise Above that’s a good thing, because if he ever made any kind of money he’d wind up hating himself. I hope he considers the irony of selling an album when he hates capitalism so deeply, but since that’s the only way to get his message out, he will (for now) get a pass.

Sun Rise Above :: Every Day I Wake Up On the Wrong Side of Capitalism
6.5Overall Score
Music6.5
Lyrics6.5