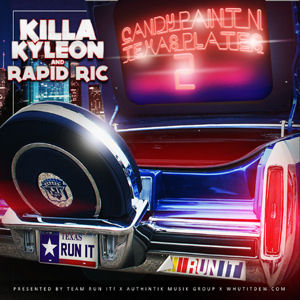 While I was never short of reasons to be skeptical about the Boss Hogg Outlawz (“Boyz-N-Blue”? Seriously?), one rapper stood out next to the designated alpha dog. That rapper was Killa Kyleon, displaying above average penmanship on many of the tracks he was featured on. Having since parted ways with Slim Thug and BHO, Kyleon is determined to establish himself amongst Houston’s heavy spitters. With his latest project, “Candy Paint N Texas Plates 2,” he takes another step on the long ladder of success.

Not too long ago, offerings by rappers of Killa Kyleon’s ilk would have been streamlined from front to back with synth tracks and hustle raps. In today’s open-minded climate, a mixtape like “CPTP2” is much more diverse. It can place “Watch the Reaction” next to “Come on Baby” and thus go from old-style southern rap with Pimp C and Lil Keke to a Mac Miller feature on a beat by Spanish production team Cookin’ Soul. And since it sports a soulful southern sound, it does well to consider talented H-Town singers like Jack Freeman (“Make Me”) and Ced B. (“Gangsta Life”). The references are also broader, be they lyrical or musical. On “Bodies Hit the Floor” Killa namechecks the nu-metal band from Dallas that inspired the song’s title (“Let the bodies hit the flo’, I kill this shit like Drowning Pool”), while Big K.R.I.T. samples Bon Jovi and Biggie Smalls for the epic “Hustler’s Prayer” as Kyle rises to the occasion with a lyrically dense performance:

“Heater on my waist where I keep it, one of the safest places
Strapped on alert, duckin’ Satan cause I ain’t safe from hatin’
Waitin’ patient, paper-chasin’, so I keep my shoes tied
Niggas fuckin’ up the game, I think it need its tubes tied
Everybody get they chance to borrow like some used tires
I just watch my back for these haters and all these dudes’ lies
Lyin’ ’bout they real on these records in front of cameramen
Run a background check – them niggas fake as mannequins
Are real niggas extinct? I swear them niggas vanishin’
like dinosaurs, T. Rex, another gone, he next
Belly of the beast, I came out it like a c-sec’
Behind bread them killers at your throats like a v-neck”

Channeling his brusque vocal tone into a sleek, adjustable rap flow, Kyleon serves up a concoction of bragging, wordplay and pop culture references (from The Matrix to Kim Zolciak) that is part familiar, part individual. Early on he stresses that he’s not “Regular/Average”:

“Serial Killa, the flow is so Manson
Pen and paper like me and the devil slow-dancin’
Let’s just say Grace like a nigga know Nancy
Love bankin’, so me and that teller romancin’
The Stones like DeVito, my jewelry so fancy
Bitches in the King’s Tower like I know Fancy
Yeah I’m gettin’ money, let me Capp, no Andy
So bitch niggas hatin’, y’all boys so transit
Cadillac wagon on swangas, no candy
So The Box love me like Ray J and no Brandy
Keep dough handy, count it up, spend it
My bad if these broke-ass niggas get offended
Sippin’ syrup smoothies, Sprite and drank blended
Me and a bad bitch, ass pokin’ like syringes
I keep one next to my Jimi like Hendrix
Schoolin’ these niggas like Lamar, no Kendrick”

While stereotypical rappers are hard to find these days, stereotypical rap hasn’t made its exit just yet. On “CPTP2” it rears its head on tracks such as “H.A.T.E.R.” (Enough with the bad acronyms already!), “BeyoncÃ©,” “Money Takers,” “Ballin’ (Freestyle)” or “Dreams.” These are solid to strong, but it’s just not the same as when Killa freestyles over K.R.I.T.’s “Time Machine,” raps over tracks by the infallible Cy Fyre who combine the modern with the vintage (“Salute Me,” “Dope”), can rely on collaborators of Lex Luger’s and Bun B’s caliber (“Bodies Hit the Floor”), or bodies the “Who Shot Ya” beat:

“Money never sleep – me neither, I put in OT
until a nigga see sudden death like I’m in OT
So till the reaper come and take me out the game
I’m fly, they gon’ need TSA to take me out the plane”

Handling potential crossover hits (“Come on Baby”) and mature reflections on relationships (“Change Up”) with equal aplomb, addressing a global hip-hop icon and the local Texas scene at once (the fitting finale “Letter to Pimp C”) – Killa Kyleon seems just about ready for his official solo debut.