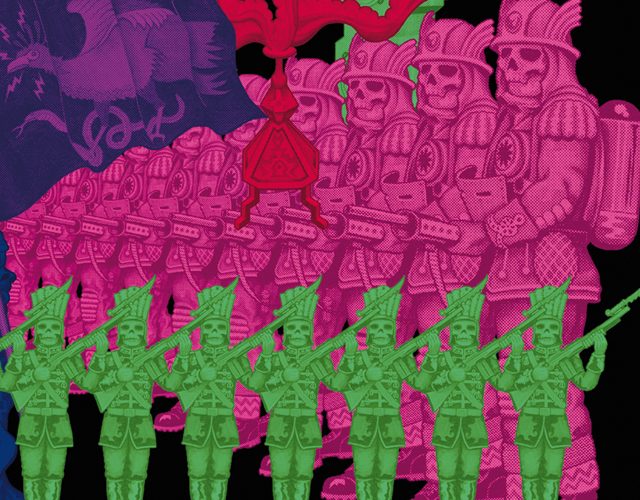 I first mentioned Birdy Nam Nam on this site when I covered DJ Mehdi’s “Red Black & Blue” in 2010. On September 13th 2011 DJ Mehdi tragically passed away at the age of 34 due to a fatal accident at his house in Paris, a week before Birdy Nam Nam released their third album “Defiant Order.” Both acts, while having switched to the electronic stage, have their roots in hip-hop. Mehdi laid down beats for the French rap elite for close to ten years (mid-’90s to mid-’00s), while Birdy’s Crazy B and Pone have acted as radio, mixtape, tour and club DJ’s and individually worked with renowned French rap acts such as Fabe, Rocca, Alliance Ethnik, 113, Triptik, or Svinkels. Pone and Crazy also secured the team title in the ITF World DJ Championships in 2000 with Skratch Action Hiro, while the newly formed Birdy Nam Nam (sans Pone) triumphed in 2002 at the DMC World DJ Championships.

At one point, however, DJ Mehdi and Birdy Nam Nam bid the competitive environment of hip-hop goodbye. Their albums in the new millennium may reference the genre to varying degrees, but they also make it clear that they are treading different territory now. Nevertheless, with their background BNN might prove an interesting outfit for hip-hop listeners who also lend electronic music an ear.

Seeing Birdy Nam Nam live can be a revelation. The sight of four DJ’s manning turntables and entertaining a crowd with the means of hip-hop but with music that goes beyond hip-hop is something else. Through heavy turntable work BNN create dark, brooding sets that evoke sensations more common to rock concerts than hip-hop shows. They toured extensively with their second album “Manual For Successful Rioting” and actually don’t consider themselves a typical electronic music act or DJ team but rather a full band.

On “Defiant Order” they hook up with producer Para One, who happens to have a hip-hop past as well, having worked with avantgarde French rap troupe TTC from 2002-07. The album starts off – at least from a hip-hop standpoint – very promisingly with “Jaded Future,” a visionary interpretation of southern rap music, building on abrasive synths and a heavy bass drum before the melodic leads are cut in. Later the track returns to the opening theme, focusing once more on the bas(s)ics before taking off again and finally fizzing out in a spacey finale.

DJ Paul and Juicy J would surely nod their heads in approval when listening to “Jaded Future.” Since we’re down south, we’ll also report that the following title track samples a certain ’80s rap tune that became a cornerstone of New Orleans bounce music. But the presence of other elements is much harder felt on “Defiant Order,” starting with the bass hammering with industrial precision. It is complemented by sluggish drums, slightly skewed vocals, plenty of melodic sounds winding their way through the track, and a slumping break adding further dynamic to this crazy trip.

Unlike a vast number of pieces of electronic music, “Jaded Future” and “Defiant Order” come across purposeful. They explore the realm of melodies but don’t wander off into some fluffy ‘trance’ state. They are looking to hit the funk rather than signaling ‘dance’ in loud letters. The rhythm section of these two tracks is a veritable arsenal of body-snatching, eardrum-shattering elements. To my disappointment, the album never returns to that grandiose opening.

Still “Defiant Order” deserves dap for taking the listener on a road trip across the universe of electronic music. Although starting off like any random piece of abstract, wobbly, glitchy, jazz-influenced electronica, the excellent “Parache” keeps my attention with its steady progression. Other tracks don’t quite surpass the stage of electronic tinkering. “Goin’ In” is somewhat see-through with its repeated “I’m goin’ wild for the night, fuck bein’ polite” hook fishing for the club crowd. “The Plan” is a token sci-fi track with vocals about the alien experiment called Earth. After an almost mythological intro “Written in the Sand” exemplifies the type of tune that has no other ambition besides creating an atmosphere. “Big City Knights” uses the sounds The Cataracs recently introduced into rap music, and that’s more or less all there is to it. Teki Latex’ slowed vocals on “Cadillac Dreams” sound like a bad knock-off of Houston rap tradition, although in all fairness – as a tribute to the West Coast sound it actually works, and a contemporary rapper like Curren$y would jump on this with the quickness.

A trio of tracks makes for a inspired final third. “Melancholy at the Sports Bar” is a bluesy improvisational piece that fares well without any drums. “(The Golden Era of) El Cobra Discoteca” has the potential to be the album’s club hit, shifting from a nostalgic ’80s opening to a pumping house groove, all the while referencing one of the genre’s most iconic acts, Underground Resistance (with a lyric lifted from “Transition”). The eager yet subtle “Black Bird Cloud” concludes the journey, establishing a playful suspense missing from the mid-section of the album.

Those looking for the turntablism experience best hope to catch Pone, Crazy B, Little Mike and Need on stage since “Defiant Order” mainly provides the crew with the possibilities needed for a live performance. Their new studio album certainly has its moments but ultimately caters too much to the conventions of electronic music.