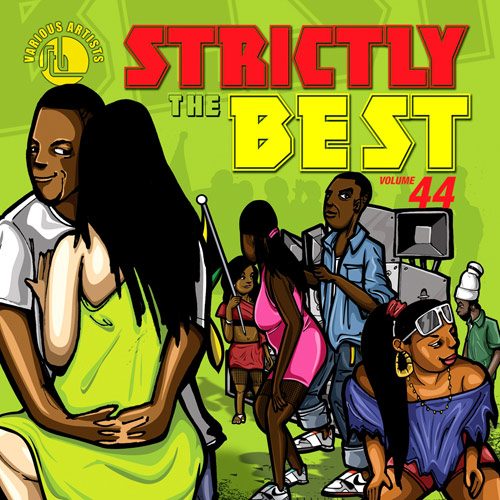 This album is the 44th installment of VP Records long-running “Strictly The Best” series, which collect the biggets current reggae hits into one package. “Volume 44” is more focused on reggae singers.

“Volume 44” opens up with Tarrus Riley’s “Shaka Zulu Pickney,” a roots track comparing the Jamaican youth to great black historical figures. It’s followed by another roots track, Queen Ifrica’s “Pot Ha Fi Bubble,” where Ifrica laments “Things seem to be worse than they’ve ever been.” Roots music has always been concerned with suffering and sufferahs, and Riley and Ifrica carry on the tradition.

Etana switches things to love with “People Talk,” followed by Gyptian’s “My Number One.” His voice is much less processed than on his hit “Hold You,” and he proves himself to be a worthy successor to lovers rock singers like Gregory Isaacs. Tessane Chin’s “Fireworks” could have been a Rhianna song if it had glitzier production, and Ms. Chin sings the hell out of it.

Jamelody wakes things up with his soulful “This Time,” followed by veteran Beres Hammond’s “I Am Missing You.” Tarrus Riley appears again with the acoustic “Never Leave I.” Freddie McGregor, I Wayne, Richie Spice, Tifa, Chino, Denyque, and Chris Martin and Alaine also have songs on this collection.

Romaine Virgo’s “The System” exemplifies contemporary reggae. The production is clear and crisp, with a mix of live instruments and synthesizers. The song has an R&B feel but for the one-drop beat and Virgo’s patois. Virgo has a strong voice, selling the lyrics about how the system lets people down.

While I found some of the instrumentation on “Volume 44” too quiet storm for my taste, the soulful singing made it work for me.