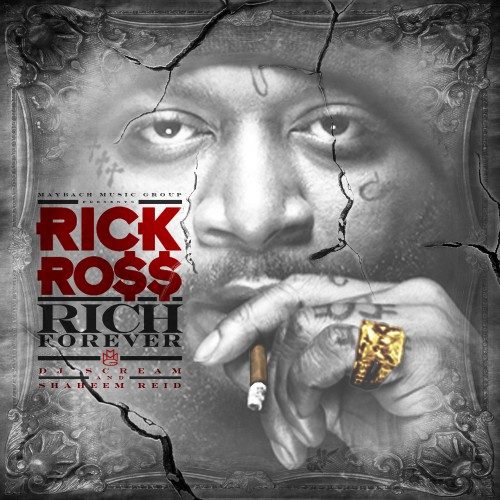 Me and Rick Ross, not the real Ricky Ross, have a love/hate relationship. I love some of his music, hate what he stands for. It wasn’t always this way. When “Hustlin” first dropped I jammed the song like everybody else did and was actually impressed the pudgy rapper who used to do cameos in Trick Daddy and Trina videos had scored a hit of his own. As Ross piled up the hits I remained impressed, but still didn’t consider any of his albums worthy of owning due to their rather shallow nature. Once his past as “Officer Ricky” was exposed I couldn’t take the guy seriously at all. My issue has never been with the fact Rick Ross was a C.O. – I think him going to college and being gainfully employed is actually an example of the man’s hustle and I commend him for that. My issue has always been the fact he denied his past and continues to push the glorified lie that is a drug dealer’s lifestyle. Of course, the world doesn’t revolve around me and as people have pointed out before – I may be taking rappers a bit too seriously. In Rick Ross’ case, when you strip his music of any expectations and take it for what it is you can’t deny that he continues to make catchy music with good beats that people like. “Rich Forever” is no different as the rapper cooks up another batch of ballin, blingin fantasies served over exquisite production.

At 20 tracks there is room for filler and that space is not left unoccupied. Unnecessary skits aside, Ross should have left out at least a quarter of the tracks here with “Party Heart” being the worst offender. Stalley annoyingly croons over a simple, empty beat about not breaking a girl’s “party heart” and wanting to “party hard.” “Off the Boat” also fails to impress with its generic Lex Luger concoction of cascading synths and stuttering snares. Granted, this is a mixtape so you can’t really be mad at a few clunkers, but to borrow from the man himself – the streets forgive, I don’t.

Of the music that does hit hard, Ross gives us more than a handful of potential singles. The already buzzing “Stay Schemin” is a mellow, reflective hustler’s anthem complete with a Drake feature. One can’t help but vibe with Ross when he declares “I’m getting money, that’s in any nigga category.” The grandiose visions of hustling are the recurring theme on this collection of tracks. “High Definition” finds Ross declaring “Time to talk about the money, I can tell you bout a profit, ocean front spot moving niggas out the projects.” “New Bugatti” finds Ross bragging about his money with Diddy echoing the sentiment. Ross even attempts to sound deep by pleading “talking to the holy ghost in my Bugatti, he knocking on the door don’t let the devil in” on “Holy Ghost.” For those looking for lyricism deeper than that you can get your fix with impressive verses from Nas on “Triple Beam Dreams” and Styles P on “Keys To The Crib.”

“Rich Forever” lives up to its title in every way. Most every song is about hustling, getting money, and spending money. It certainly doesn’t reach the catchy levels of Ross’ biggest hits on most songs, but sounds good enough to have been decent album tracks. Though I doubt these songs will have much in the form of lasting impact on anyone, for a weekend of partying or long car drive to work there certainly is enough to warrant a download. According to my own metrics, I see myself holding on to a good 8-9 tracks off of this for those moments I want to detach from reality in every way and pretend to be the lead in Scarface.