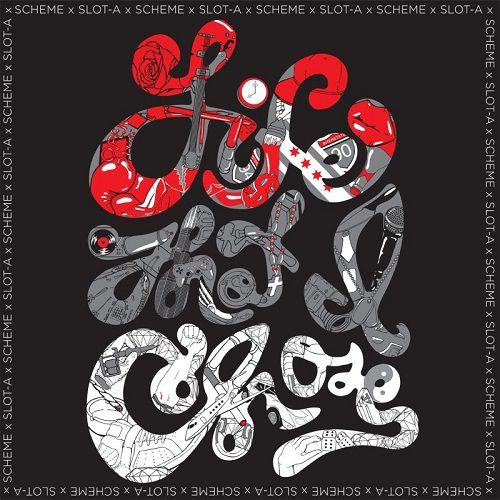 Scheme :: Life That I Chose

I had a hard time coming to a conclusion about this album. I wanted to like it, everything was there for me to like it, and I want to root for guys like Scheme. The production was well done, the lyrics aren’t bad, the songs by themselves are entertaining, and maybe on another day I would love to endorse this album.

Still, I have this feeling that I’ll forget about this album once I’m done reviewing it. It’s not out of any disrespect or insult to Scheme, it’s just the way it is. If I look at it from a technical and musical standpoint, the album manages to hold up well. However, if I ask myself “Will I listen to any of these tracks once I send this review in?”

The answer, while immersed in a murky cloud of doubt and double guesses, is a no.

The album starts off with “Let it Burn”. A-Slot, who handles the production for the entire EP, introduces the song with stripped down bass drums, and Scheme begins things by repeating that “this is for the kids!” The beat eventually drops, speeding up the tempo and adding a synth loop and high keys that puts some weight behind the sound. Scheme takes awhile to get warmed up, but he gets into that unconscious mode where his schemes and flow clicks into place. The one problem I have with his flow is that it’s hard to understand it. It’s not due to any vocal tick or skew, it almost feels like his flow is too fast for his mouth to keep up. I don’t hear the entire line sometimes, all I hear is what he intones and emphasizes.

“Get Down” featuring Paradise starts with a little more punch, with both producer and MC warmed up, A-Slot and Scheme waste no time getting into form. The beat is non-stop snare and strings, and Scheme stays hi-speed with his flow. Paradise handles the hook, which sounds repetitive but manages to hold the song together in between verses. “One Helluva Night” is Scheme’s party jam, and A-Slot makes things light by borrowing some West Coast G-funk synths. As a party jam, it works because A-Slot keeps his bells and whistles for the hook, keeping the beat simple and highlighting Scheme’s ability to ride a beat during the verses. As a result, it made for a better listening experience found in “Get Down” and “Let it Burn”.

A-Slot brings back his heavy hands for “Lost Children of Royalty”. The tempo is slow and kept in place with alternating claps and bass drums. Weighted keys set the backdrop for Scheme to paint the picture for the lost population of America’s ghettos. Scheme slows down his flow to keep pace with the slower beat, and the result is an easier time listening to what he has to say. He still tries to keep the flow seamless, but when it’s easier to pick up on what he’s saying, it sounds a lot better.

“Hello (What Up?)” features fellow Moleman artist Astonish. The song is one for the ladies, as most rappers these days feel the need to write one for the ladies. Astonish handles the hook and the singing, while Scheme lays it on smooth. Both A-Slot and Scheme manage to come together and make a successful jam for the ladies. The title track “Life That I Chose”, again featuring Astonish, closes out the album. A-Slot and Scheme channel their joy in doing what they love to do, Astonish garnishes the track well, and the album ends on a good note.

I like Scheme and I want to like this album. The production is good, Scheme is a good rapper, and the album wasn’t a chore to listen to. However, there’s still a few flaws that keep this album from being memorable. I can tell that Scheme has decided to stick with that seamless, nonstop flow, but he’s got to learn how to get his lines out clearly. When I did manage to catch what he was saying, I can tell that he’s a good rapper with substantial things to say. Just a little more refinement in the delivery, and maybe next time I’ll be forced to keep Scheme’s album in my rotation.