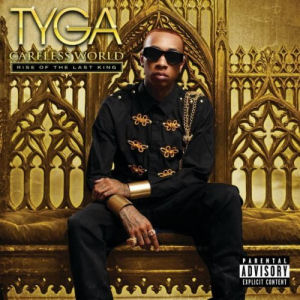 The young Michael Ray Nguyen-Stevenson b/k/a Tyga got his jump-off in the rap game thanks to his cousin Travie McCoy of Gym Class Heroes fame. In turn GCH had their career launched into the stratosphere thanks to Pete Wentz of emo/punk/pop rock band Fall Out Boy, who signed the fledgling rap group and put out their “As Cruel as School Children” CD. Even if you don’t know that album you know the smash hit “Cupid’s Chokehold” that came from it – you know, the “Take a look at my girlfriend – she’s the only one I got” song. Now this is by no means an indictment of the insular and often nepotistic world of the music industry, but I want you to ponder for a moment that without Pete Wentz one of the biggest rap hits of 2012 wouldn’t exist – Tyga’s “Rack City.” After reading these lyrics, you can decide whether or not to thank him for it.

“Rack City bitch, Rack Rack City bitch
Ten ten, ten twenties on ya titties bitch
Hundred deep, V.I.P., no guest list
T-T-Raw, you don’t know who you fuckin with
Got my other bitch fuckin with my other bitch
Fuckin all night, nigga we ain’t celibate
Make it sound too dope, I ain’t sellin it
Bar fresher than a muh’fuckin peppermint
A gold letter means last king killin shit
Young Money, Young Money and we gettin rich
Got’cha grandma on my dick (hah!)
Girl, you know what it is”

The success of “Rack City” is for better or worse not based on its lyrical content though – it’s entirely about the hypnotic baseline and finger snapping track of DJ Mustard. Tyga could have simply repeated the song’s tagline or chorus for three minutes and still made a hit – in fact for large parts of the song that’s exactly what he does. Perhaps that’s an unfair track to judge Tyga on. Let’s take a look instead at the first single “Far Away,” which is aptly named since it was released in May of 2011, proving this album had a long gestation period before its ultimate February 2012 release. American Idol contestant Chris Richardson sings the hook, while Jess Jackson provides a pop-friendly musical background for rapper and singer to do their do.

“It’s cold, puttin up a fight
Arguin back, and forth through the night
Regardless what I said and I don’t mean most of it
You know I really love you, this the realest gon’ get
It take time, to realize what you really wanna know
You was ready for it all, but your feelings I ignored
I know, my fault, I should’ve gave more
Now you’re miles away and I’m miles on tour
Now it’s, drums playin, crowd singin, light changin
Wish you was here to witness all that now starts fadin
They say two wrongs don’t make it right
And I was wrong and now it ain’t right”

Tyga won’t receive high marks for intricate lyrical complexity here, but the sincerity of his words and his heartfelt delivery means more than any wild technique he could display. Tyga does have high-minded ideals though – ideals that are occasionally betrayed by songs like “Rack City” – but lofty goals all the same. In fact part of the reason the release of “Careless World” was delayed was that the title track of the same name had an unauthorized use of a Martin Luther King Jr. speech that had to be removed. On the soulful “Lil Homie” produced by and featuring Pharrell, Tyga states his determination to rise above negativity, while offering others a chance to learn from his mistakes:

“They say what don’t break a nigga make a nigga
I woke up out my dream, said I gotta get it
This whole city full of thieves, gotta watch my pivot
Cause on the block niggaz never seen good livin
Only lived in, jail cells or prison
Drivebys, lil’ homies hit the store for liquor
I gotta steer my life different; where to begin with?
Momma told me go back to school, I said I’m finished
There’s only one way a nigga gon’ learn mayne
You gotta take risks and do things the hard way
Stole the hall pass, now I’m runnin through the hallways
Only thing in my memory from those days
You couldn’t save a nigga even on a Sunday
Monday, new day, shit still the same
Gotta switch the rhythm up like Kwame
When things change watch people do the same
as I hear a voice sing…”

Even though Tyga has a lot of buzz going in and access to the top names in the business thanks to inking his status with Young Money and Cash Money, the production is occasionally hit or miss. The Jess Jackson produced tracks are winners – including “Do It All,” the Chris Brown and Wynter Gordon laced “For the Fame” and the ethereal “Light Dreams” with Marsha Ambrosius. Cool & Dre handle “Let It Show” featuring J. Cole, which has to be a future contender for a single. Dnyce’s “Faded” doesn’t work though – trying to use some Bay Area style hyphy minimalism without managing to be banging. Some people may like David ‘D.A.’ Doman’s work on “This Is Like,” but to me it’s too cloyingly sweet, and Robin Thicke takes it into sugar overload. I generally love Boy-1da’s tracks but “I’m Gone” with Big Sean is just average – not a bad moment on the album but not as dope as what he’s done for Drake and Kardinal Offishall in the past.

There’s still more to like here than to hate, including the over-the-top exuberance of “Celebration” with music by Calvo Da Gr8 and vocals by T-Pain, or the cross-collaborative “King & Queens” produced by Arthur McArthur and featuring cameos from Wale and Nas. This is a clear and definitive evolutionary improvement from his solo debut on “No Introduction,” which is all a listener or reviewer could have really asked for. At times the album feels bloated and excessive, but Tyga is only 22 years old. He’ll learn to pare it down and keep only the best songs on future releases, which will hopefully not be as long delayed as this one was.