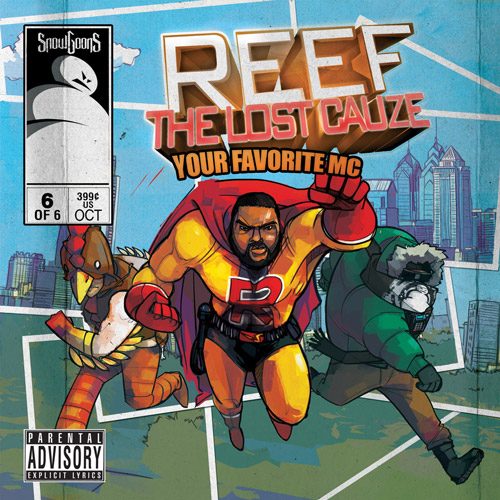 The high hopes I had for the 2011 M.O.P./Snowgoons collaboration “Sparta” weren’t quite met. It felt as if Bill and Fame went for unspectacular backing tracks that would not detract from their performance. A year later I’ve come to the conclusion that the album falls right in line with all the other prized M.O.P. longplayers and I take it as proof that the Snowgoons, known for lining up legions of mic mercenaries on compilations, are able to service single rap acts with tailor-made beats. Arguably not even Boi-1da beats or Clams Casino instrumentals would detract from the fact that M.O.P. are in town, but no one can deny that both camps have an affinity for rap loud and insistent enough to bring down the walls of Jericho.

Simultaneously with “Sparta” another full-length co-starring the Snowgoons was available, Reef the Lost Cauze’s “Your Favorite MC.” The Philly MC has been a fixture on Snowgoons albums since “German Lugers” and is certainly worthy of the preferential treatment. “Your Favorite MC” too is trademark Reef. After an anthemic intro defining the collaboration as nothing less than a “Brotherhood,” he launches into “Fuck Rappers,” essentially revisiting his “I Ain’t No Rapper” sentiment from ’08 (he prefers we refer to him as MC). It’s what they do best, Reef projecting lyrical darts over a martial, dramatic beat straight out of a Hollywood blockbuster:

“Yo, this beat is snappin’, the streets is crackin’
This beat is madness, release the kraken
Oh yes we back and you are gonna feel this shit
It’s the Snowgoons and I’m fuckin’ Frostilicus
An animal that wandered in, straight from the wilderness
And I ain’t talkin’ YouYube when I say I got a million clicks
For the past seven years, me and my peers, tell me, homie, who rappin’ better?
Who kill every track? Who brought Philly back? Nigga, check that trackin’ record”

Fans of the Snowgoons experience will not be disappointed by the guest list. Jus Allah and Sicknature play henchmen on the Army of the Pharaohs-reminiscent “Euthanasia,” Sabac Red and Wise Intelligent report for the conscious rap crusade “Mount Up” (“Bling made the dictionary, Edutainment didn’t / Wise Intelligent’s offensive yet Murder Inc. isn’t”) and J.O. and King Magnetic help rep Pennsylvania on “Big Shots.” Reef is a master of many trades, whether it’s the rap pro who sends letters home from tour with Outerspace (“Timezones”) or the goofball cooking up quite a special type of club track with Esoteric (“Brain on Drugs”).

If the Lost Cauze possesses a unique selling proposition it’s his ability to capture moments and situations and turning them into songs. How he voices and visualizes his need to retreat on “High By Myself” makes it instantly relatable, even to non-smokers. He doesn’t always succeed. “Kill Somebody” is nowhere near the breaking point where you really want to kill somebody. But the civil war analogy “Black Opz” (which he frames with excerpts from ‘Monster: The Autobiography of an L.A. Gang Member’) or “Devil’s Advocate,” which subtly condems turning a blind eye to crime, are songs you won’t find on most other rap albums these days. You probably also won’t come across song ideas like “The Legend of Mr. T,” but as long as they’re outnumbered by tracks like “100 Rhyme Books,” Reef steadily works on his legacy, so that he’ll one day really literally leave behind a hundred rhyme books for his son to learn from:

“Schoool is important, get your degree and all
But it’s also important to be young and free and see it all
Brazilian beaches and London cathedral halls
Camp out in the desert underneath the stars
I want your views to be worldly
I want you to leave a legacy, a path, a vivid story
In order to do that, expand your horizon
Fuck other people, it’s not their life to be decided
Love is hard, son, sometimes it’s all a game
but you’ll chase it forever cause the heart is kinda strange
And as far as religion, to me it’s all the same
God is God no matter what you call his name
If you’re not sure what I’d do
let daddy’s music guide you
I’ll always be right beside you”

“Your Favorite MC” is another solid effort from Reef the Lost Cauze – with able support from Europe’s experts for epic and heroic soundtracks. Like Reef the Snowgoons refuse to “know what style is in,” and we’re all the better off for it.