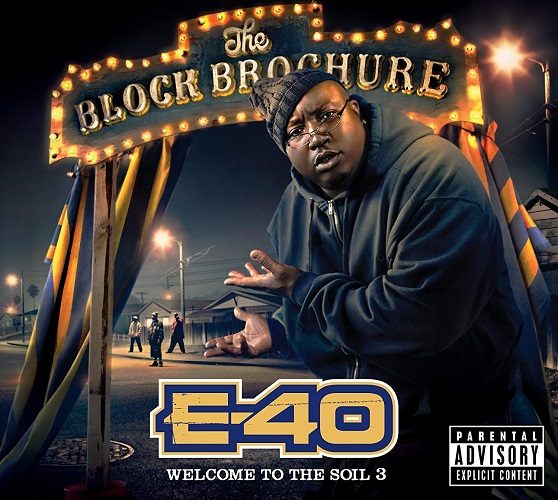 Today we conclude what started two weeks ago with “Welcome to the Soil 1” and continued last week with “Welcome to the Soil 2.” Multi-generational rap star E-40 released three separate albums on March 26, 2012. Depending on what versions you buy, that’s anywhere from 54-60 new songs if you copped all three at once. My copies of each album have had 18 songs, so I can’t speak on the bonus tracks, but to be honest I’m not sad about it. There’s already over an hour’s worth of music on each album without the extras, so it’s not as though Earl Stevens was scrimping on the content. It’s not unprecedented for E-40 to be heavyweight, but he usually spreads out the girth over weeks or months. This time he dropped the whole load in one shot, like it or not.

For the most part I like it, and “Soil 3” contains some of the best material out of the entire set. It also contains the songs with the most crossover potential. “What You Smoking On” is a California super-collaboration, linking Vallejo to Long Beach as Snoop Dogg and Tha Dogg Pound get down over a very “Chronic 2001” style beat complete with crooning by Kokane. Speaking of G-Funk, you can feel the smoky sound bubbling up through the waters of the Warren G produced “What Happened to Them Days” featuring J Banks. I called E-40 “multi-generational” in the first paragraph in a none-too-subtle attempt to explain how long he’s been in the rap game, but as it turns out E-40 may not be happy about being around that long. He’s pining for a time when things seemed less technological and complicated:

“Uhh – what happened to them days? They gone
When we played outside, ’til the porch light came on
Now you cain’t get ’em up out they home
Let alone, come up out they room!
Gears of War, Halo, Red Dead Redemption
X-Box or PlayStation
On the computer or sex texting
Man it’s a different generation!”

I’m a little surprised to hear this expressed by E-40, who usually comes off as hip to new technology, instead of squarely opposed to it. Age might be catching up to Earl a little bit, but I don’t think it’s all that bad to act your age, and I can’t fault his old school values of fighting with your knuckles up instead of putting the hammers down. Getting back to the album, one of the collaborations I’ve been waiting to hear for YEARSfinally happened on “Soil 3” – E-40 and the Hieroglyphics on the simply titled “40 & Hiero.” Most of the other songs feature the cameos you’ve come to expect on a 40 album: Too $hort on “Be You,” B-Legit and Willy Will on “I Ain’t Doin Nothin’,” Kaveo and Droop-E on “It’s Curtains” and Stressmatic on “Stone On High” just to name a few. He’s also down with the Black Hippy crew though, as Kendrick Lamar gets a little time to shine on “Catch a Fade”:

“Pulling up and hopping out, shell, catch it popping out
And I ain’t never been a Tom or a Jerry, pussy or a rat
Pussy on my nut sack, carry plenty Kenny Tates
Give me that, give me plenty Feddi
Federales on my back, pack ’em in the cemetery
Send a scary hit out on your messenger, I’m ignorant to wrestle a
gorilla in the center of an Acura Integra
I’m pissed off, so I piss off rooftops
Drink it through a straw, fuck a rent-a-cop, I’m hot
I’m napalm when the beat slap like eight palms
And I wear eight charms, every airport alarm
go off till they tackle me, what I do wrong?
Nigga, it ain’t bout the chain, nigga, you the fucking bomb”

“Soil 3” closes with the most somber song of the entire series, and one of the longest to boot, 339 seconds of “Sidewalk Memorial.” It’s a fairly odd juxtaposition of styles – slow wailing horns that would suit a New Orleans funeral, but E-40 delivering some of his quickest spit lyrics. “When I see a bum I put some money in his cup/even though the bum probably richer than my butt/That’s good karma, generous and nice/little things like that can change your life/Never lose hope mayne, keep the faith/good things comes to those who wait.” And if you’re an E-40 fan, good things definitely came out of waiting a whole year from “Graveyard Shift” until this triple feature. The final installment is arguably the best of the three, although “Soil 1” could still give it a run for the money – and there’s no doubt Earl banked a lot of that with this massive music set.