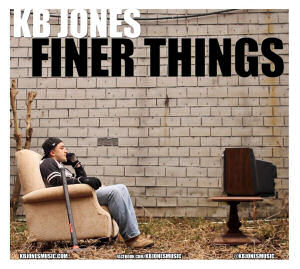 The one thing KB Jones profiledoesn’t tell me before reviewing his album is how he got there from his real name being Daniel Munoz. Wouldn’t D-Money have been the logical moniker? Or maybe Dan Da Monster? There’s got to be a good story behind the choice. Unfortunately that info doesn’t seem to be on his official website either. What I can tell you for sure though is that KB started out as one member in a band called The Spoken Truth, and that when he went solo he released a free album called “The Honey on the Side.” It’s still available BTW, so if you want to hear a little of his music while you’re reading the review, go ahead and click the link (it will open in a separate window). The first single off “Finer Things” is the provocatively titled “Fuck the Bullshit”:

“Fuck the whack emcees! Fuck the radio top ten
I’m sick of people comparin me to Asher again
Yo fuck the haters! Only mad cause I’m an innovator
Fuck that suit, that don’t hold open the elevator
Fuck goin to work, and havin to take a shit
and if you’re more than 5 minutes, your boss’ll have a fit
Fuck my girl yellin at me, and gettin serious
Then the next day, she blames the outburst on the period
Fuck reality shows, devaluin the flow
for makin all my friends a bunch of fiends that I don’t even know
Fuck the models and they runway shows
Those skinny bitches need to know they need some meat on they bones!”

As hip-hop tirades against mainstream mediocrity go, it’s one of the better I’ve heard in a while, and KB Jones certainly delivers it with enough emotional intensity to have credibility. Even though he clearly resents the comparisons to Asher Roth, I can +almost+ see it. He’s not as into frat boy topics or humorous punchlines as DJ Green Lantern’s favorite rapper, but there’s more than an iota of similarity in terms of their vocal tone. The diction is crisp and clear too, which is something I appreciate a great deal when listening to rap albums is what I do for a living even when I’m +not+ reviewing them. Even if he’s making the same points other emcees have already made, it’s more compelling on songs like “Higher” just because such careful attention was paid to the vocal equalization.

“So at the first sight of Jones, you may think I’m a prick
with an oversized ego, and a hose for a dick
But I’m always fuckin smart remarks to start shit
If I’m not leavin with your chick well then I’m bustin ya lip
And I suppose, the realest of the emcees know
if you don’t spice up reality to show
you a hard motherfucker with your finger in the air
the public will portray you as soft – they really don’t care!”

I can’t lie – I popped a smile for those eight bars. To me that was an even more effective rant than “Fuck the Bullshit” because it was subtle. He portrays the stereotype of a swaggering macho rapper yet simultaneously points out that if you don’t play that role you don’t get critical acclaim and radio spins.

The place where “Finer Things” doesn’t always live up to its title is that the production occasionally falters. Tracks aren’t necessarily bad or unlistenable, just occasionally a little mundane and uninspiring. “The Virgin Mary” is a good example – the story alone about a girl KB is into who just can’t keep her pants zipped up is better lyrically than musically. On the other hand it’s absolutely infuriating that KB throws away one of my all-time favorite beats for the “Grow Up (Interlude)” instead of rapping over it – old heads like me will remember it as the backdrop of the Kurious Jorge song “I’m Kurious.”

Everything else about “Finer Things” falls somewhere in between those two. Some people might not dig the singing or swinging of “Nobody But You,” but it reminds me pleasantly of Gym Class Heroes. “The Love That We Lost” seems a little confused though – like a good idea in the studio that fell apart due to being paired with a complicated drum track. “California Dreaming Again” is fly though – largely slow and mellow but given a rougher edge thanks to some guitar rock heard on the hook. “Boom in the Box” is a boom bap plus, but “Pull Up a Chair” gets a little too Everlast at times for my taste.

Even though I didn’t know KB before this album, I suspect The Spoken Truth’s loss is hip-hop’s gain, because KB strikes me as having more to say than the average rapper and the cleverness to do it differently. The debut album is meaty at 17 tracks, but also a lean cut since it clocks in at under an hour total. It’s enough to make me hunger for more, so after getting a taste of the “Finer Things” in life I’ll be coming back for a second meal later on.