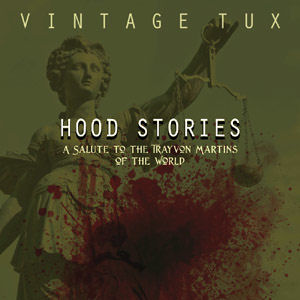 Vintage Tux :: Hood Stories – A Tribute to the Trayvon Martins of the World

The Trayvon Martin case raises questions that carry significance for the entirety of US society. Suddenly old wounds open and the country finds itself once more debating fundamental issues. To comprehend what might have happened on the evening of February 26th in Sanford, FL, pundits have made a variety of points. A minor but widely publicized one has been the ‘hoodie’ argument, as brought up by Geraldo Rivera, who on Fox News offered that many people associate hooded sweatshirts with criminal behavior and that simply by wearing a hoodie the young man made himself a target to an overzealous neighborhood watcher.

As far-fetched as Rivera’s claim that “the hoodie is as much responsible for Trayvon Martin’s death as George Zimmerman was” is, it does highlight the state of paranoia America has watched and talked itself into where individuals can seemingly only act as stereotypes. Rap may be partially responsible for the proliferation of the hoodie in teenage wardrobe, and it has definitely reinforced negative stereotypes with its music aimed at that same demographic, but to those listening close enough rap has also been on the forefront of fighting stereotypes – unlike certain media outlets. As Bronx MC Lord Finesse put it many years ago: “To many I may look like a hoodlum / But I’m a rapper and a pretty damn good one.”

Either way rap should have something to say about the death of Trayvon Martin. Florida crew Vintage Tux decided to make an artistic statement with their freEP “Hood Stories,” subtitled ‘A Tribute to the Trayvon Martins of the World.’ Rapper M.E.R.C. takes us back to that fateful day on three of the EP’s tracks, the opening “Seventeen” and “Young Love,” and the closing “Last Night.” Musically “Seventeen” is marked by sadness, while lyrically M.E.R.C.’s anger about the senseless killing flares up for the first time:

“It ain’t racial, it’s all about right and wrong
I dipped the quill in fresh blood to help me write this song
This ain’t the first time, it ain’t the last time
It seems like killin’ niggas, that’s they favorite pastime
Bullets versus Skittles, that’s the tag line
And if he reachin’ for his waist I gotta grab mine
I’m of the human race, I know you see my face
but if the hoodie’s on my head you wanna see a chase”

“Young Love” adopts the perspective of Trayvon beaming about his girlfriend who brings to his face a smile “so big that you can pick me out of any crowd.” After their innocent “puppy love” is described in verse one, fate takes its course in verse two. “Last Night” opens with Zimmerman’s call to the police before M.E.R.C. once more speaks as/on behalf of Trayvon.

For the remaining tracks M.E.R.C. takes a more radical stance. Recalling dead prez with lines like “Search warrants say we gotta let the pigs in / They only love you when you runnin’ with the pig skin,” he moves in stealth mode to the creeping bassline and suspenseful horns of “Piece of Mind” as singer Soccorro provides a haunting hook. On “Trust Us” he directly addresses the shooter and then moves on to those getting on the outrage bandwagon:

“Willie Lynch said enslave ’em
For a thousand years bait ’em
with dreams of riches, tell ’em Jesus might save ’em
if they teach they kids to be a slave when they raise ’em
And the cycle goes on and on
These leaders, they don’t wanna fight without a microphone
It’s gotta be high profile; I might be wrong
but if it ain’t on CNN, they lights ain’t on
They ain’t home, won’t answer the phone, they want the limelight
Better get your mind right, forget Walter Cronkite
You slimy organisms better get your spines right
You can’t lead us to the light with your hindsight”

M.E.R.C., who turned heads last year with the Tribe tribute “Daylight Marauders” he recorded with DJ A to the L (who’s also part of Vintage Tux), is a soft-spoken but lyrically precise MC. On “Hood Stories” however he lets frustration dominate his raps and winds up in a territory that is already occupied by formidable rappers like Killer Mike, Boots Riley or Immortal Technique. Over the course of six tracks M.E.R.C. would have had time to explore the subject more exhaustively instead of going in circles. “Hood Stories” is a commendable effort, both emotionally and artistically, but considering “Young Love” it could have been even more.