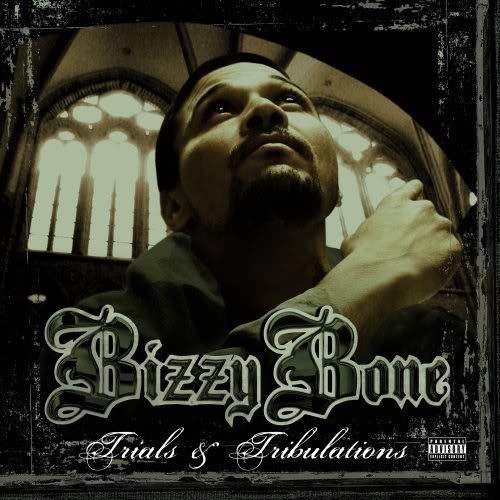 Bizzy Bone’s career is full of more twists and turns than a Tom Clancy novel. He’s a fifteen year veteran of the rap game with a well recognized name and should be able to roll on the strength of that with no worries. Unfortunately for Bizzy he has been associated with Bone Thugs-N-Harmony for the majority of his career, and is now seperated from the group on what may or may not be amiable terms. His solo career has not been nearly as successful as his membership in the group. The greatest of his own releases, “Heaven’z Movie,” occured in 1998 while he was still a member of the Bone family. Albums in the 21st century have had much more mixed results, including 2004’s mediocre “Alpha and Omega.” Curiously Bizzy fared much better on “Bone Brothers,” the only thing close to a reunion he’s had with Bone, a duet album recorded with Layzie Bone. The success of this album inspired a sequel titled “Bone Brothers 2,” but on closer inspection the album turned out to be remixes from the first with a few new tracks added.

The often suspect Wikipedia states that 2007’s “Trials &: Tribulations” appears to have been conceived in a similar fashion. There’s certainly some anecdotal evidence to this effect – the lack of publicity for this album’s release, the relatively useless liner notes (half of which are an advertisement for other Real Talk releases) and the tracks all being produced by Hella Tight or a production camp called Beatkillaz. If they’ve done any other album for any artist as well known as Bizzy Bone, holla back. Otherwise the only conclusion one can draw is that they’re complete unknowns. All of these indications reflect a Death Row style “Nu-Mixx Klazzics” album, but if they are from previous Bizzy Bone albums they’ve been cleverly disguised. The only song title one can find which matches up to any other album is “A Thugz Prayer” and that’s more skit than song anyway. Now granted Bizzy seems to have released almost a dozen or so obscure solo albums in the last two years (why is he suddenly so prolific) so there’s a chance I just missed it, but it’s just as likely a Bizzy Bone hater made a malicious edit to the entry for the relevant Wiki page assuming nobody would notice. One thing that certainly can’t escape your notice on “Trials & Tribulations” is that Bizzy Bone is a VERY religious man now. Take “I Don’t Think You Know” for example:

“I told the homey they don’t know me, they don’t know who I am
All I know is I am here for a reason, you dig?
So much confusion, tryin to use me, ignore the whisperin jibs
So much for promises, hypocrites continue to sin
They talk anonymous but obviously I know who they is
And in all honesty the reality is that I don’t care
The love’s still there, tryin to take me out of my realm
Better yourself, cause this is what I’m here for now
The Lord prevails, and of course you know our journeys are sacred
I keep the Word in me, burden maybe that’s why they hatin”

It’s much less clear WHAT religion Bizzy represents throughout the album. Some of his raps seem to be directed towards a very Christian vision of God, other times Bizzy repeatedly states that he is “a slave of Allah, the master of creation” or that “Allah is God [and] Muslims in the house.” Other references are much more ambiguous, as you could take a line like “we need to pray every day” either way. “Let the Haters Know” may be the song that settles the debate as he professes to “study Islam” and offers a greeting of peace (asalaam alaikum) to the listeners, yet in the same song he makes reference to how no Judas can stop him and how he came in the door “blessed” yet other people act like they “found” him. At some point you just throw out trying to decide what Bryon Anthony McCane II’s religion is. Quite possibly he has found that religion is an a la carte menu and you can pick and choose the elements of each that work best for you. It’s certainly a novel approach to these days and times where religious fervor has caused even members of the same faith to view each other as enemies just because they don’t interpret their holy texts the same way.

Putting religion aside there is some value to “Trials & Tribulations” even for the sacrilegious out there. “You Don’t Want It” featuring Joseiah & Aeileon El Nino has a nice swing and bump you can cruise to. “The Block” seems like a throwback Bone Thugs track, with the high-pitched Biz singing along to a well produced mixture of bass, drums, claves and synthesized keys. Two versions of “Don’t Ask Me Why” feature Bizzy spitting street game and singing the hook, offering the simple but effective advice “stay true to yourself, nobody else will help.” The thinkling pianos of “Distant” are smooth and pleasant, making it easy to ride with Bizzy on the track. Whether this album is a remix of tracks from other little known Bizzy Bone albums may be up for debate but there are a few things which still come across loud and clear – Bizzy is serious enough about his faith to mention it at least once on almost every track and some people just might not be down with that. Despite the parental advisory sticker on the cover this may be the closest thing to “gospel rap” I’ve heard in a while, although Bizzy largely avoids the trap of being preachy and instead offers the listeners his own personal testament to why his faith brings him peace. It’s an interesting new direction for Bizzy Bone and one I’m not entirely opposed to. Bizzy Bone may be the one Bone Thugs member who won’t be lonely at the crossroads.