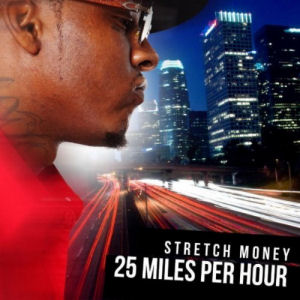 “But I ain’t trippin’, I’m still spittin’ with infinite ammunition
My ambition, got me on a solo man mission
To pick up where Pac left off, the game lacks substance
To me, these motherfuckers ain’t saying nothing”

Like many underground rappers today, Stretch Money sees a problem with the current state of mainstream hip-hop. After growing up listening to legends such as Biggie, Nas, and Tupac, Stretch reminisces on the days when hip-hop had “substance” and attempts to steer it back in the right direction with his sophomore album “25 Miles Per Hour,” inspired by both his love for the music and his struggles growing up in a single-parent household in Detroit. Of course, while this sounds good in theory, it takes more than just grit and determination to make it in hip-hop, and while it is evident that Stretch Money possesses both these qualities, absent from his latest release is the lyrical prowess and complexity â€“ the substance â€“ that is necessary to warrant significant replay value.

The lyrical shortcomings are evident from the opening track, “Work of Art,” as Stretch Money gives the listener a window into his personal life and his career trying to make it in the rap game, voicing his frustration with the hardships he encounters along the way. Over a soulful beat from Nick Speed, who handles the entirety of the production on the album, Stretch spits a rather stereotypical opening verse:

“Cause I just wanna see my niggas livin’ right
Cause wrong is exactly what we livin’ like
Yea, it’s been a long time coming
I’m on my marathon it’s been a long time running
Black and white Cortez’s, Forrest Gumpin’
This music is all I got, at least I’m sure of somethin’
Confusion is in my life, I’m abusively sippin’ brown
When I’m on the mic, I undeniably put it down
My town is full of hatred and jealousy
These motherfuckers’ hearts is cold like the weather be
I still uphold the name, rep hard get a look at me boy
A fit description of a young nigga from Detroit”

While Stretch succeeds in getting his message across, the lyrics are very straightforward and lack the clever wordplay or intricate rhyme scheme necessary to set him apart from any number of similarly situated artists with the same story. The next track, “Smile,” though, has a much more upbeat feel that is better suited for his delivery, and he spits one of his best verses on the album as he praises his mother for raising him and his brother on her own, rapping “Even though she gotta deal with the fact that she alone/With these boys and she gotta raise â€˜em up â€˜til they be grown/ On her own but she strong though/ I ain’t talking bout the muscles in her arms, taught a nigga right from wrong so it’s only right I put it in this song.” Stretch provides an interesting contrast with the next verse, as he deals with the death of a close friend, but he ends on a positive note, reminding listeners that “it’s hard to smile sometimes but you gotta.”

Aside from “Smile,” there are a few other standout tracks throughout the album, but this is due more to Nick Speed’s production than Stretch’s vocals. “Listen 2 Some Music” has a smooth, laid-back vibe, with soothing orchestral strings laying the foundation as Stretch spits about the simple pleasure of kicking back and enjoying some good music. “They Ain’t Listenin’,” on the other hand, has more of a boom-bap feel, with only a simple bassline and guitar pluck to complement the heavy sampled drums. And “Let’s Get High,” despite its one-dimensional focus and simplistic lyrics, has a steady drum loop and fluttering jazz flute that combine to form one of the best instrumentals on the album.

After just a couple listens, though, I could already feel the material growing stale, as there simply wasn’t much outside of a few quality beats and solid verses here and there to keep the listener engaged. Stretch’s stories of growing up in the unforgiving streets of Detroit are engaging in some respect, but given that street tales are a dime a dozen in hip-hop these days, an artist like Stretch really needs to bring something fresh or original to the table in order to stand out. There are already enough emcees talking about hustling, smoking weed, and chasing women (as Stretch details on the album’s final track, the materialistic and superficial “You Just a Bitch”), and “25 Miles Per Hour” only adds to the slew of mediocre releases. “Smile” is certainly the best song the album, and is worth at least a YouTube search for any hip-hop fan looking for a feel-good track. Overall, though, while Detroit hip-hop fans may want to take a closer look, there simply isn’t much substance on Stretch Money’s latest release.