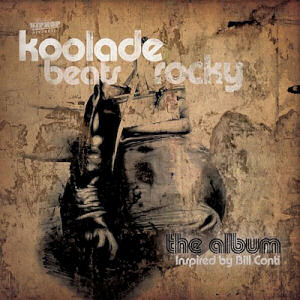 “Sun beamin on my awning, front window of my apartment
Lace myself in fresh garments
Day started, with a dutch and a plate
Juice carton, Philly Daily News, information I barely use
Tennis shoes, Ray-Bans, Wray & Nephew rum punch
Cheesesteak for lunch
See the world such, right through the front glass
Columbus Ave, 7-6 West, Vine Street Express
Bless the architects who erect the visions of intellect
The way my thoughts, pen and paper, rhymes connect
This is the Mecca of the soul, +Rocky+ blue collar rock ‘n roll
American Bandstand, and the Benjamins” – Maylay Sparks

Even if the name “Rocky” wasn’t in the title of this album, the lyrics of the above track would have hipped you to the fact this Koolade album is all the way live to 2-1-5. There’s an interesting twist to this Phillie Blunt though. As Maylay notes in the opening to “Philly Morning” this album is “all world, West Philly to Zagreb […] even out in Croatia they feel this shit.” Say word? Word son, because that’s where Koolade comes from. The man behind some of your favorite songs from Masta Ace, Styles P and Ghostface Killah hails from the biggest little country in Europe, a land of proud people with big balls who drink OÅ¾ujsko beer and sing about how their soldiers once marched all the way to Paris. The next time you have to put on a three piece suit for a classy function, you can thank them for introducing Parisyans to the style of wearing neckties. (I learned all this from an episode of Zane Lamprey’s “Three Sheets.”)

Getting back on track though, Koolade has decided for the first time in 15 years to create an album of his own, and in keeping with that length, he’s created a 15 song release that’s styled after the 15 rounds that Rocky Balboa boxes in his title fights on the Hollywood screen. As you’d expect the instrumentals of Bill Conti factor heavily into this CD, which may in part be why this album was given away as a free download. Somehow though I lucked into a hard copy of the album though, and even though it only came in a CD sleeve, it has a professionally printed insert and disc artwork. If it weren’t for the high cost of clearing these samples, you’d probably find this one at retail stores somewhere near you.

That’s really a damn shame, because “Koolade Beats Rocky” is fly enough to make the trip from Philly to Zagreb without airfare. Many of these songs are just straight up chill instrumentals like “Redemption” and “Mickey,” but whenever emcees guest on the album they’re Philly natives who keep the theme in tact – rappers like Peedi Crakk on “All Round Philly” and Frank Stallone on “Take You Back.” Even the album’s lone female guest star is a crooner from Philadelphia – Rasheeda B. I respect the hell out of Koolade keeping the theme, because it lends credibility to the Rocky samples and in turns those samples give a unique Illadelph sound to the guests like Maylay Sparks who rap on ’em. The only ways I could rate this album higher were if (1.) there were even MORE Philly rappers like Black Thought and Reef the Lost Cauze on it, (2.) the joint was a bit longer (it’s much shorter than a Rocky movie, only 43 minutes) and (3.) it was a retail release. Other than that though – JOB WELL DONE.