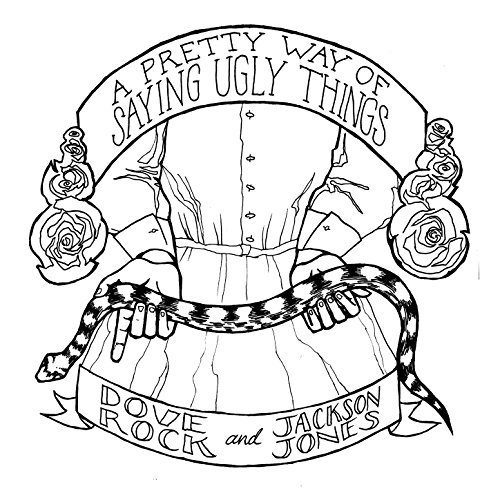 “Every time a bell rings an angel gets its wings.”

If you deconstruct that sentence from the title track of “A Pretty Way of Saying Ugly Things” you get an idea of what Dove Rock is all about. It sounds innocent and cute at first until you start to think about what “angels” are perceived to be in the New Church sense: “All angels originate from the human race, and there is not one angel in heaven who first did not live in a material body.” Suddenly that cute innocent phrase takes a much more ominous turn – a bell rings, SOMEONE DIES, and there’s a new angel in heaven. That’s definitely a pretty way of saying a very ugly thing.

Before we go any further talking about Dove Rock’s vibe and what she brings to hip-hop it’s time for a small disclaimer. We have covered Galapagos4 releases many times before on this website, and I personally hold them in high regard as a small label that truly embodies the motto “quality over quantity.” As such they remain among the indiest of indie labels, with even long time underground rap fans very likely to have missed out on their releases, owning perhaps a dozen Rhymesayers albums and not a single record with the G4 imprint. I feel they deserve the exposure of reviews like these for their commitment to a higher quality of music even on a small budget with limited resources to promote what they do. As such I also would be doing you a disservice if I didn’t tell you the exact same thing the press kit did – Dove is married to the label’s owner Jeff Kuglich a/k/a Dallas Jackson. That admission may invite scorn or derision that Dove “got the hook up” to drop an album, but I think the fact they state it up front is a preemptive attempt to address and dismiss it. They aren’t hiding who she is or who she’s married to, so if you make that a bias while listening to her words, that’s on you.

Intentionally or accidentally Dove Rock reminds me of both Dessa of Doomtree and Kimya Dawson of Aesop Rock fame. She’s got the rapping of the former, the singing of the latter, and a third part that’s entirely her own based on her experiences growing up on the South Side of Chicago. That’s part of the reason she’s able to find a pretty way to say ugly things, because she’s undoubtedly seen more than her share of tragedy and heartbreak in that environment. Her heady mixture of hope and despair comes across loud and clear in songs like “The Biggest Loser” featuring Asphate. She becomes eerily reminiscent of Jean Grae on this rant about hip-hop sexism.

“What’s he supposed to say? Like ‘No thanks, put your money away’
When the Montessori f–k-ups FedEx Nike bouquets
[…]
Attention monger makes the living leeching off who he can
That black sheep with wolf’s teeth, that meet/meat market affairs
As mami’s scrappy fired retorts are met with sick hitting snares
And college girls still mouth the words like pillow talk in front row
Then let the desperation and the dollar bills flow”

Even though this song makes me crave more of her intelligent words there’s a surprising gap in such a short release like this (32 minutes) where you hear nothing but a pounding beat called “Return to Zero” for four minutes and change. As much as I enjoy Jackson Jones’ instrumental it seems like a wasted opportunity.

It’s my own downfall for referencing G4’s tendency towards “quantity over quality” that I’m now lamenting how short Dove Rock & Jackson Jones’ album is. They’d rather give you 8 good tracks than 16 mediocre ones, and I have to respect the art, but hearing “Spirits” will remind you that even the songs can do more with less. It takes all of 2:43 and makes it count, which makes it the fitting note to end this review on, an album which uses its short time span to make a big impression.