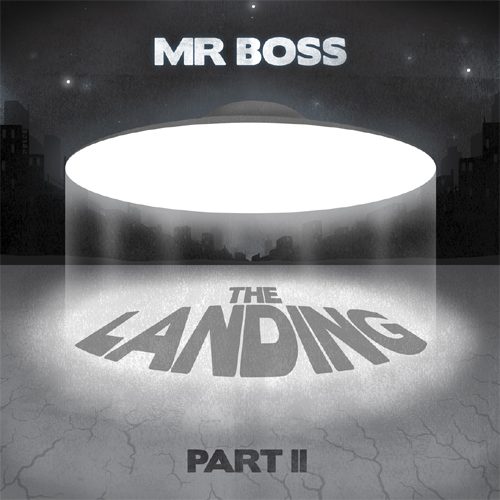 UK producer Mr Boss dropped his first album, “The Landing,” when he was just 18. Two years later he is following it up with “The Landing Part II.” It’s a 15-track collection featuring twelve British MCs rapping over Mr Boss’s beats.

Boss favors moody beats with heavy low ends. While a lot of UK hip-hop producers experiment with dance music, Boss sticks with a more East Coast sound, using drums that might have come out of Primo’s toolbox. He lays a combination of samples and live instruments over this, the end result sounding similar to Blockhead’s melancholy beats. For the most part, the MCs match the mood. Sonny Jim starts things off rapping about having “one foot on a landmine/Looking like they found me at an alien crash site” on “Lemon Squeezy.” On “Underrated,” Freedom tells the story of being jumped for his chain.

It’s not all downtempo and morose, however. Ramson Badbonez uses a beat based around pounding pianos to spit some rowdy rhymes. The centerpiece of the album is Dirty Dike’s accurately titled “Rant.” It’s three minutes of him spitting hate and frustration, and comes with an instrumental a cappella version for any aspiring producers who want to tinker with it.

Another standout track is “Rain,” featuring Ronnie Bosh, Stig of the Dump, and Freedom. The three MCs use the gloomy weather of the UK as a jumping off point to describe their equally grey moods:

The MCs are all Brits who are clearly influenced by East Coast American hip-hop along with their own homegrown music. They do a good job of localizing hip-hop, spitting rhymes that pay homage to old school rap styles while sounding clearly British. That shouldn’t be a surprise given the Brits have been working for over thirty years to claim hip-hop as their own, but it is always nice to hear non-U.S. rappers find a way to adapt the art form to their own idioms and vernacular.

“The Landing Part II” is a solid effort of underground hip-hop. The beats are on point as are the rhymes. If you are looking for something dark and brooding, Mr Boss has got you covered.