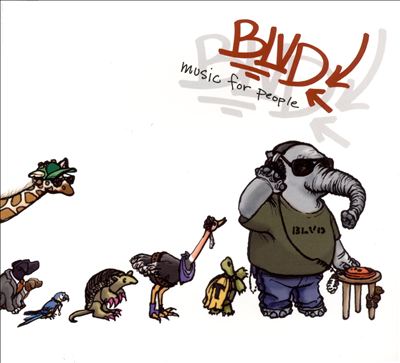 It’s often hard to say when an artist crosses that threshold from obscurity and into having “made it.” Getting major radio play? Sure. Playing sold out crowds at A-list venues? Oh yeah. Hearing your song on a commercial for a Victoria’s Secret Fashion Show? Wellâ€¦maybe.

Livetronica act BLVD stands at this ambiguous crossroads with its fourth album “Music For People,” on the verge of more widespread recognition just as they have diversified their sound by adding a full-time MC to their three-man line-up. The original trio consisted of Tripp Bains on bass, Dylan McIntosh on drums, and Curtis Sloane on electric guitar, with the latter two doing behind-the-boards work as well. Colorado resident Souleye is the newest element in the mix, contributing his raps to all but one of the album’s ten tracks and shaking up the group’s already unwieldy mix of genres. The new direction appears to suit them, though, with CBS taking notice and using their song “Stamina” to promote their winter underwear extravaganza. Whether or not the Moby path to fame by ad music succeeds in making them a household name, it’s as good an introduction as any to a group whose sound is actually adding something new to the increasingly entrenched style laws of hip hop.

It’s generally pretty worthless to try to draw concrete boundaries around any type of music, especially hip hop, but it’s safe to say that BLVD prances around the blurry edges of such a division. Their music bears a traditional “band” aesthetic more than anything else, and certainly much more so than groups like The Roots or Gym Class Heroes who also use live instrumentation. They aren’t really attempting to use their instruments to fit within a traditional hip hop aesthetic but rather employing a live band to expand this blueprint by muddying the generic waters. A lot of their music sounds like classic hip hop breaks along the lines of “Planet Rock” re-imagined through the lens of a funk outfit a la Parliament/Funkadelic. That comparison is a little over the top, as BLVD’s compositions are much tighter than what that might suggest, but it gives you a hint of what their mash-up sounds like.

Souleye is a capable MC who specializes in large-scale philosophizing about life’s many vagaries. His style has some strange resemblances, the first being to Lloyd Banks. His scratchy monotone is similar to the G-Unit MC’s, but so is the way his voice occasionally jumps to a higher register to emphasize a certain word. His delivery, on the other hand, has plenty in common with Visionaries MC LMNO, particularly in his rapid-fire word rate. The double-time delivery works well with the band’s musical direction, but his tendency to rattle off sixteenth notes at a machine gun pace eventually gets tiresome when not juxtaposed with a more syncopated flow every now and then. His choice of topics works most of the time as well, but it can veer into the overly broad platitudes that Kweli spouts on his worst days.

The breakdown of Souleye’s skills on the mic is not all that essential in the end, though, because it’s the overall musical package that makes “Music For People” an important listen. The songs that work best recognize this and use Souleye’s vocals as another instrument in the palette. This is the case on the outstanding “Sounds of BLVD,” a track that fully realizes the group’s lofty genre-bending aspirations with its pulsating drums, pounding bassline, and haunting synth chords, all of which is accentuated by artful electric guitar flourishes and interpolations of Souleye’s hypnotic vocals. “Attachment” builds from a typical electronica base into an insistent Pink Floyd-esque excursion into the pitfalls of consumer culture. Souleye finds his voice here, making a well-worn subject feel personal again. In harsh economic times, his rants on the endless line-up of bill payments are particularly welcome (“If you miss a day, up goes your interest rate”). The spidery guitar work and stripped-down bass-and-drum thump of “Alignment” make for another stellar song, and the delicate layering of opener “108 Rose Petals” grinds its way into your subconscious and sets the table for what is to come.

It can be difficult to make your living on the fringes of a popular movement, but BLVD makes the task seem easy. The group’s nimble musicianship is on display throughout “Music For People,” and the compositions are exquisitely crafted to get the maximum effect from each of its members. Souleye is solid if not stellar with his raps, but when utilized correctly he complements the band’s sound well and provides a voice for listeners to latch on to before completely immersing themselves in the slinky melodies and sly rhythms of the instruments. The title may not sound particularly ambitious, but their music most certainly is. Innovation rarely goes down this smooth.