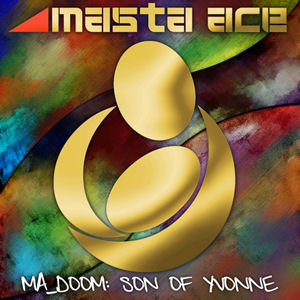 Few rappers can look back on such a long and rich recording history as Masta Ace. Ever since he was part of the Juice Crew’s defining moment of glory “The Symphony,” he’s been conscious to craft durable longplayers, starting with the classic debut “Take a Look Around,” to fan favorites like “SlaughtaHouse,” “Sittin’ on Chrome” and “Disposable Arts.” Masta Ace albums often feature an underlying theme/storyline/concept, albeit mostly loosely applied. His latest is no different.

The idea is encoded in the cryptic album title. This is Masta Ace meets DOOM, and it is the story of Duval, son of Yvonne. “MA_DOOM: Son of Yvonne” is simultaneously a dedication to Ace’s mother, who died in 2005, and a retrospective of her son’s journey as an artist, from earliest days when he would mess up her prized record collection, to earning his living far away from his Brooklyn birthplace. The soundtrack to it he found in MF DOOM’s popular beat catalogue, melodic, homespun tracks that ostensibly make Ace think of times past and inspire songwriting. Ace’s lyricism is seemingly simple, short sentences, basic double rhymes, factual descriptions and characterizations. But dig deeper and you find that he puts a little bit more thought into his writing than the majority of his ilk.

“Nineteen Seventy Something,” on the surface recounting how young Duval would raid his mother’s records against her orders, not only serves to document the musical influences at home on one side and the attraction of the newly emerging style of hip-hop on the other, it also sheds light on his upbringing by a working mother and a watchful grandmother. The coming of age story continues with “Son of Yvonne,” the Brownsville kid eager to explore the neighborhood that still knows him as son of Yvonne, instilled with maternal “lessons on honesty and virtue / and the people that’ll hurt you.”

“MA_DOOM: Son of Yvonne” is not the place for somber tales or social critique. Instead Ace raps about his career, which took him from daydreaming about performing at Madison Square Garden (“Fresh Fest”) to rocking stages in “the Netherlands, Switzerland, Finland, Deutschland and the motherland” (“Home Sweet Home”). The real skill lies in how he puts it in song form. “Crush Hour” faithfully translates the wordplay of its title, describing male courtship with a traffic metaphor. “Slow Down” cleverly uses Metal Fingers’ pace-changing “Safed Musli” to recount a tour mishap. While skits are often seen as a nuisance, they are sparse as well as subtle on this album. Particularly noteworthy are “Dedication,” where the narration blends prepubescent Duval and adult Ace, and “Store Frontin’,” where the kid passes by a group of young men right before “Me and My Gang” jumps years ahead and introduces Ace’s own crew of stoop dwellers:

“There’s Brad, he’s a college grad
Book smarts are great, street knowledge bad
He had a 4.0 in a four-year span
but he stay gettin’ scammed by the bootleg man
And that’s Bud, perfect name indeed
Cause he really loves beer – it’s the same with weed
And he likes that nutrition that packs a punch
For breakfast two blunts, a six-pack for lunch
Opposite of him is Malik Jamal
who don’t smoke, drink or eat meat at all
He be preachin’ every night about eatin’ right
while he sip a cup of coffee, puff a Newport Light”

Such ‘Good Times’ and ‘Everybody Hates Chris’ moments are aplenty on “MA_DOOM: Son of Yvonne.” DOOM’s beats ensure that the trips down memory lane are underpinned by a mixture of soul and hip-hop. There are few distractions, but they have to be mentioned. With its generic boasts “Da’Pro” comes at the wrong place and the wrong time. The same goes for the closing club-themed “In Da Spot” (notwithstanding a promising performance by female rapper Milani the Artist). “Think I Am,” impressively featuring Big Daddy Kane and DOOM himself, finds no common ground and is only saved by the latter’s verse full of admiration for the Masta and his mission. It also needs to be said that Ace has already covered his rap life extensively, rendering something like “Home Sweet Home” somewhat unnecessary. A song such as “I Did It” however is justified in the context of the late Mrs. Clear overseeing her son’s path and should have closed the album as a final farewell. In the end Masta Ace is once again more successful at writing masterful songs than designing a masterpiece of an album. As a collection of heartfelt, often humorous episodes, it’s a worthy follow-up to his more accomplished works.