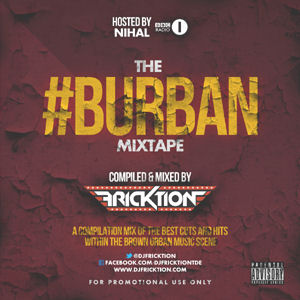 Almost exactly ten years ago I faced the challenge of covering a release called “AznRaps.com Presents No Looking Back” for RapReviews. With a little help from our editor-in-chief I voiced my uneasiness about ethnical categories within hip-hop. I’m far from color-blind myself and wrestle with these issues probably more than the average rap listener, but at the end of the day I’m convinced that hip-hop has to be a level playing field where, I know you heard this before, it ain’t where you’re from, it’s where you’re at.

From the perspective of the people who were involved in AznRaps.com (while the website is defunct, the banner is still present on various social media platforms) and in the compilation, Asian American hip-hop artists might still be in need of a support system. They would probably see it as a validation if they learned of “The #Burban Mixtape,” a showcase of British Asian rappers and singers. Ironically when it comes to demographics the US and UK have different understandings of the adjective Asian. Correlating with where the majority of Asian immigrants come from, Asian Americans are usually of Korean, Japanese, Filipino and Chinese descent, while British Asians are mainly from India and Pakistan.

What this suggests is that “The #Burban Mixtape” will be a largely internal affair. ‘Burban’ is a relatively new tag, a composite of ‘brown’ and ‘urban,’ designating hip-hop and R&B made by British Asian artists. It aims to replace the term ‘urban desi’ with the object of creating a musical identity outside of the South Asian/subcontinental (‘desi’) market. Going from one ethnic label to another seems like jumping out of the frying pan into the fire but some kind of typification is inevitable when forging a movement.

Joining forces for the common goal, rappers RKZ, AC, Swami Baracus, Raxstar and Shizzio use the opening “Burban Cyphers” for a demonstration of power, combining hunger and humor over the classic instrumental from East Flatbush Project’s “Tried By 12”:

Let’s rewind Raxstar to illustrate how nasty things can get in British Burbia:

“I got a little bit of success and now they act like I ain’t had it harder
A warrior is only as strong as the weakness in his armour
And I can be a prick, put a needle in me – leave it in me
You say it’s hate, but I just call it penis envy
Mighta fell off but look at how I bounced back
Fuck it, my next single’s gonna be a house track
They’re tryina put me in a cage like a mouse trap
This is that Dave Chappelle ‘Fuck yo couch’ rap
Your online comments can’t hurt men
The only thing moist around here is your girlfriend
I’m with her when you’re tryina ping her
The closest you’re gettin’ to her pussy is smellin’ my finger
I’m disgusted, the flow’s so rustic
The only time I let go of the mic is when my nuts itch
Radio support people based on one hit
I don’t care if you don’t play me, I ain’t gonna bum-lick”

Shizzio, a strong advocate of burban music, vows to “push the scene myself, fuck a chauffeur,” but judging from the level of collaboration on display on the mixtape (not to mention the fact they got together to shoot a video for “Burban Cyphers”), he’ll instead have to bus around a London Routemaster full of burban artists. Sam Kay and Raxstar are all about proving they’re serious on “Fall Back,” RKZ hosts another roundtable of rappers on the ‘Burban Remix’ of his “Gonna Be That” track and is joined by Rax and Menis on the deceptively romantic sounding “Defeat Me” whilst also handling singing duties.

Sung vocals are a frequent ingredient, ranging from the Punjabi singer/English rapper combo of “Jaan Jayegi” to the AutoTuned and decidedly American “Switch Me On.” The strongest musical influence is UK grime, the fast-paced, aggressive flows and abrasive beats dominating several tracks. More than once the music lacks a clear direction, meshing club, acoustic, samples, etc. It once worked beautifully for Panjabi MC, whose “Mundian To Bach Ke” was a hit not even Jay-Z could ignore. In the end there’s no formula for crossover success (musically nor commercially), the mixture of styles is something these artists have to align with their own needs and means. Some fail, like Metz n Trix with the predictable, cheaply produced “Bellydance,” some have obvious experience, like Kan D Man (“Mera Naa Ki”).

In the end “The #Burban Mixtape” shows that the burban scene is comprised of many different characters, and that’s a good thing. The main lyrical theme is being acknowledged (also on a social and political level), but the way for a musician towards recognition is always his music. The way Drilla Kid goes off on “I Just Wanna Rock” is the type of energy I expect from someone looking to draw attention, and I miss it in some of the other performances. That leaves still enough artists that deserve positive mention: Swami Baracus for the culinary metaphor “The Recipe,” AC for the Romeo and Juliet tale “True Story,” or AG Dolla for the superb “Pack it Up,” an honest breakdown of an aspiring artist’s struggle to meet family obligations.

“Why’s this Paki boy tryina rap?” (Shizzio) and “Who the fuck cares about a brown boy with a black voice?” (RKZ) are just two reactions burban artists might face. Add to that the usual stereotypes minorities are up against, and you have enough adversity to inspire great rap music. That’s not yet the case all the way through, at least going by “The #Burban Mixtape.” But as an occasionally bumpy, frequently entertaining promo spot for the burban scene it works any day.