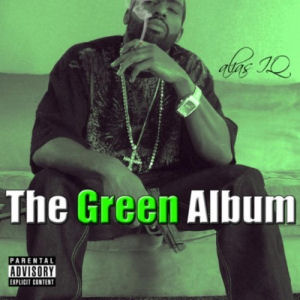 Anybody who knows me will know that an album that opens with an auto-tuned shout-out to ‘hustlers, ballers’, ‘gangstas’ and ‘scholars’ is hardly my musical dream come true but that’s exactly where I found myself fifteen seconds into this release from Kansas City native Alias IQ. It’s an unashamedly hollow start to an album that pretty much sets the standard for the ensuing forty-five minutes.

Alias IQ is another MC hailing from the currently thriving KC rap scene for which artists such as Tech N9ne and Mac Lethal have long been flying the flag. Despite both of those artists putting in work for many years it is only recently that they have started to gain the attention that they both deserve albeit for very different reasons; Tech’s recent collaborations with Lil’ Wayne opening him up to a broader audience while Mac’s YouTube appearance of him, umm, rapping really fast about pancakes has reached over twenty million views to date. With these two gents smashing the door open for the Kansas City scene the time seems right for other likeminded artists to grab the opportunity with both hands and make a name for themselves. Unfortunately Alias IQ doesn’t really do that and instead opts to recycle rather tired rap clichÃ©s over an often uninspiring selection of beats.

“The Green Album” unsurprisingly opens with “The Green Album Introduction” where the aforementioned auto-tuned hook drops before IQ tells the listener to “grab your bitch by her g-string and hit her with e’erything” over a beat which wouldn’t sound out of place on a 1997 No Limit release. “International” strangely opens with thirty seconds of guitar fiddling which is immediately forgotten and replaced by the hard hitting instrumental which is underpinned by a smooth guitar lick and stuttering drums. Surprisingly Alias IQ actually handles all of the production on “The Green Album” himself. You can tell that he is fairly skilled behind the boards and a few of the beats here (“Child of God”, “How I Feel” and “What I Do”) sound like the work of an accomplished beatmaker but IQ’s voice and lazy delivery just don’t seem to fit them quite right.

There are a couple of occasions here where Alias IQ does seem to get it right with both “Make that Trip” and “Get it Done”. Both beats suit IQ’s pimped out drawl down to the ground and if he was to channel his energy in this direction then I could see him banging out a steady stream of strip bar ready anthems. The problem seems to be that he tries his hand at too many styles of production that don’t fit his flow and the results aren’t too pretty.

That is probably my biggest issue with this LP. I could forgive the lack of substance to the rhymes if there was something there to carry them. Either a commanding flow, a unique voice or even just some clever wordplay would be enough to keep this listener’s attention but as it is I couldn’t find any reason to press play again once the album had run its course. At times it sounds like Alias IQ is struggling to keep on beat and he can often be heard trying to hurriedly pack an extra four or five words into a bar when he really shouldn’t need to. He did make the beat himself after all.

I accept that this album is not for me and Alias IQ is clearly targeting a very different listener to the one tasked with reviewing it. It is highly doubtful that he created this album with the intention of cracking that elusive ‘thirty year old white guy from the south of England’ market and so maybe, just maybe, this release will be greeted with a warmer reception elsewhere.