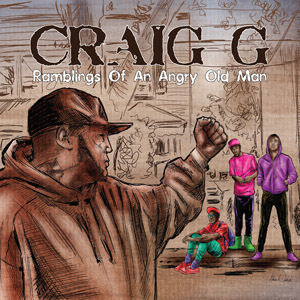 Hip-Hop is no country for old men. Or is it? Jay-Z and Dr. Dre are still at the top of the game yet older than virtually any of their contemporaries. (Whether they’re still at the top of their game is another question.) Obviously they remain exceptions to the rule in a genre with an insatiable thirst for fresh blood. It’s a small crew who has survived as actual recording artists since making their debut in the 1980s – Beastie Boys (at least until MCA’s passing), KRS-One, Rakim, Too $hort, Public Enemy, De La Soul, Kool G Rap, Masta Ace, Bumpy Knuckles, Poet, E-40, DJ Premier, DJ Muggs… Starting out in 1985, Craig G has been in the game for as long as any of them – if not longer. Embracing his elder status, including the mockery he might earn for it, the veteran names his latest project “Ramblings of an Angry Old Man.”

It’s a wonderfully self-deprecating album title that seems to fall flat considering the only lyrical irony to be found within is of a rather mild variety and it’s strictly leveled at others. Yet if it’s meant as an anticipation of the stereotypical reaction releases from established rappers who speak from experience often get, it’s dead on. In that case Craig G is out to prove that what he has to say isn’t simply a bitter distillate of 26 years in the game.

It’s unfortunate that he warns us at the top, “If your idea of hip-hop is 90% of what you hear on the radio waves, then turn this album off now,” because with its critical observations on the rap industry it could serve as a wake-up call to a younger generation:

“There’s a few guys I know that think they’re next to blow
Thinkin’ that you add water, don’t respect the growth
Drop a couple mixtapes, then stomp upon the scene
And – bo! – there’s the fortune and fame, know what I mean?
I tell ’em I don’t feel ’em cause I treat it like a job
Green as a plate of grass, settin’ yourself to get robbed
Publishing gone, along with that your masters
Once they stop carin’ for you you head for disaster
I learned the hard way, that ain’t light
Do it on your own terms and you’ll never lose sight
of who you really are, instead of lost in your publicist
Tryina keep up with those lies, we had enough of it
Blue collar hip-hop, where everyone ain’t rich
or hidin’ from the feds hopin’ somebody don’t snitch
This is for the people that work every day
Here’s some reality hip-hop to get you on your way”

There’s more of that, for example in “Thats Good For You,” which contrasts dreams of being a rap star with the realities of life while Marco Polo bundles sonic rapid eye movements in a dream-like beat. Left Coast representative LMNO tries to match the upstream philosophy of “Originality” with a similarly strong-minded beat and makes it a point to cut up the D.O.C. quote, which makes the track the second nod to The D.O.C. this year after O.C.’s “The Formula.” Jake One is reliable as usual with soul thumper “Effortless,” where a stunning Chaundon outshines both Craig and Rapper Big Pooh, similarly to Devin the Dude showing up the Strike Team a/k/a Craig G and Mr. Cheeks on “Interstate Travelin” – the two fare better alongside Sadat X on “It’s Real.” One-time Lost Boyz collaborator Dremost exhibits his flair for tight percussion with “Oh Oh Oh It’s” and “I’m Just Saying,” the latter’s breakbeat set-up inspiring Craig G to pick up the pace flow-wise:

“Dance with us, advance with us, we breed intelligent
lyrics over hard-ass beats, it is our heritage
Challenge me? You better quit
To the soft and delicate –
I’m back on my terror shit
Wes Craven, Excorcist”

Claming to be “not interested in a rap battle” (“…Nothin’ to prove there; you lost, toss a map at ’em”) on “Back at Em” doesn’t prevent Craig from going after competition. On “Call That Hip Hop?” he unmasks fronting rappers and figuratively declares open season on them on “Rabbit Season,” which is based on unusual source material from singer-songwriter Tom Paxton. Some may remember that Craig G scripted battle rhymes for the Eminem vehicle ‘8 Mile’ whose lead character was named B-Rabbit, but rest assured that despite the coincidence “Rabbit Season” isn’t in any way aimed at Em.

As far as songs not about the rap game go, “Heaven & Hell” finds him trading socio-political commentary with Styles P over a tried and true Undisputed Truth sample, while “Rare Day” extends Ice Cube’s “It Was a Good Day” to the point where the rare peaceful day turns into a typical tragic day. The cautionary, Curtis Mayfield-sampling “Get it in the Streets” suffers from half-assed Beatminerz production, ending the album on a musically mediocre note together with Dremost’s “Money Don’t Matter,” which is based on a cheaply processed ’80s pop sample.

Craig G has been hip-hop for so long that it’s almost impossible to criticize him without coming across like an asshole. Just his features this website mentions for 2011 and 2012 prove how widely respected he is in underground circles. And yet the immense experience is not on full display on “Ramblings of an Angry Old Man.” He scores the mandatory points against the old ‘rap game’ bogeyman and sets an example for anybody looking to survive in it, but that’s pretty much it. Is it wrong to expect more from an MC who was once himself at the forefront of a rap revolution and who has since failed to become more to us than a veteran we’re supposed to hold in high regards because he kept his skill set sharp?

Beyond these general reservations, “Ramblings” is a mostly commanding offering from a man who knows hip-hop better than me and you. Call him a grumpy old man all you want, it sounds like Craig G will have the last laugh. Or better yet like he’s already laughing.