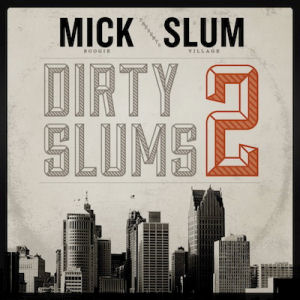 J Dilla month continues at RapReviews with “The Dirty Slums 2,” although the connection here is a little more tenuous. His Slum Villagemembership brought recognition of his production talents to a new level, but Dilla moved on to his own career in the early 2000’s and his departure was the first of many upheavals for the group. The only original member of the group still alive is T3, and long-tenured and popular lyricist Elzhideparted from SV in 2010 – arguably not on good terms. What exactly is the group now? Well you’ve got Dilla’s brother Illa J in the mix, long-time affiliate Young RJ, and you’ve got T3. I suppose as the sole person with direct linage to the name since day one, anything with T3 can be called “Slum Village.” Other things such as any current or former member rapping over Dilla beats could be considered “related” but not necessarily SV itself.

As confusing as the scenario seems to be from the first paragraph, the very fact this amorphous group is worth trying to discern should give you an inkling to the value of the Slum Village name. It’s almost silly at times on “Dirty Slums 2” though, as the revolving door lets a parade of collaborators in and out, any of which could probably stake a claim to SV after this point. Black Milk is in no way an original member, but his Detroit sound and style make him a spiritual successor to not only the group but to the Jay Dee sound that put them on the map. Guilty Simpson was one of Dilla’s favorite collaborators, so including him on songs like “Decadence” invokes the ghost. Even North Carolina’s Rapper Big Pooh claims in an interlude that (paraphrasing) there would be no Little Brother without SV, and no him without Little Brother, so there’s another piece of the pie.

The truth of the matter though is that T3 is on 17 out of 24 slices of that fruit filled pastry, and when you subtract out interludes and skits that’s actually 17 out of 19. If you were under the mistaken impression T3 was generously handing out shares of Slum Village to anybody with a connection to the group or deceased cohorts Dilla and Baatin, the fact he’s on almost 90% of the songs on what’s ostensibly being given away for free (though a high quality paid download is an option) proves who is the alpha dog and who calls the shots. Young RJ can describe the album as “our opportunity to do what we want to do – the evolution of SV to a new form” but without the “Jay Dee Intro” he’d have no form to evolve. That opening spoken word segues into the song “The World Is Yours” by Baatin and T3, which firmly establishes for this mixtape what the heritage of SV is. No matter who gets plugged into the formula, the original 3 oversee it all – two in the essence and one in the physical.

Now that we’ve established T3 has the right to call whatever he likes Slum Village with credibility, the question to be answered is whether or not “Dirty Slums 2” fulfills that legacy. Yes – as much so as “Villa Manifesto” did back in 2010 – only without Elzhi this time. As tempting as it is to assume his absence takes a chunk out of SV lyrically, this project doesn’t seem to suffer. Production is strong throughout and that helps move things along no matter who raps in the rotating cast. “How it Feel” certainly feels like a Dilla song of old. The aforementioned “Decadence” is ruggedly beautiful – a surly and dirty boom bap rap slap anthem. “Riot” starts perfectly with the line “I +Set It Off+ like I’m F. Gary Gray” and the echoing toms once again bring the Dilla feel back to the group, as does the playfully sexual “Look At Yo Face” with Illa J and Vice. From the lightly and bubbly “Church Remix” with Focus and Skyzoo to the throwback stylings of “Gone” featuring Bahamadia, “The Dirty Slums 2” hits all the right notes. You can call it Slum Village or not as you choose, but you can’t call it a bad album.