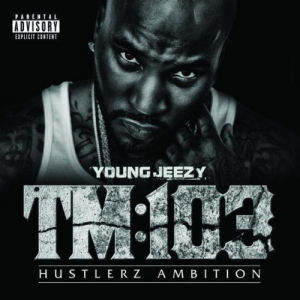 “They want me trip on my strings, want me fall on my face
Hit a lick for a hundred, and it fell in my safe
Say she no alcoholic, but she drink like a toilet
Told her do me a favor, and put your mouth on this faucet
I know just how she like it, she might think I’m a psychic
Even call me a plumber, she like the way that I pipe it
Niggaz talk like they know me, they must got me mistaken
Bitch I’m pleadin not guilty you’ll never charge me with fakin”

“What I Do (Just Like That)” is a statement of principles defining Young Jeezy’s philosophy on “TM:103 Hustlerz Ambition” as well as any song could. The Atlanta all-star has a rap career dating back to 2005, where he first came to national attention as a member of Boyz N Da Hood, then very quickly eclipsed their fame on his solo debut “Thug Motivation 101.” As his star rose into the sky like a cloud of marijuana smoke, fans came to know his raspy voice and unrepentant lifestyle well, flashing iced out jewelry and getting in trouble wherever he went. Showing out is nothing new, but as the title of 2008’s “The Recession” acknowledges, it was somewhat contradictory to how most of his fan base was living. Since then he’s been largely off the radar (police or otherwise) with “TM:103” being pushed back multiple times.

Now that the album has finally arrived, any anticipation I felt has long since dropped off, right along with singles that he released before the album that are not included. If you don’t buy the deluxe version of “TM:103” you won’t get “Lose My Mind” or “Ballin” at all, which is especially irritating given they are two of his best songs since 2008 and feature Plies and Lil Wayne as guests respectively. It’s shit like this that makes people buy thedigital version on Amazon

instead of physical compact discs, because none of the songs you wanted are left out. At least the 14-track version peaks on the last five tracks, starting with “Trapped.” With a Jill Scott cameo and production by J.U.S.T.I.C.E. League, it’s a certified banger:

“Even though we had a will, we ain’t have a way
They just told us how to live, we ain’t have a say
All I know is the other side got some cuts for ya
Fresh khaki suit, nigga that’s enough for ya (yeahhhh)
Got you spendin all your money on lawyer fees
Judge throwin numbers at you like he speakin Japanese
All cause a nigga out’chea playin bakery
I’m out’chea tryin to get this bread, somebody pray for me”

This is followed by a string of well produced tracks with killer cameos: “F.A.M.E.” featuring T.I., “I Do” featuring Andre 3000 & Jay-Z, “Higher Learning” featuring Devin the Dude & Snoop Dogg, and “This One’s For You” with Trick Daddy. Unfortunately rolling with rappers better than you can expose the level you’re on badly. At times Jeezy has an insightful view of the hustle those in poor and urban communities go through to make a living. At other times he’s “gone off the Belvy and Patron” as he brags about on the single “I Do,” and the punchlines he drops are just embarrassing. It defies belief when he rhymes “contact” with “contact,” especially on a song where he knows he’ll be sharing billing with top level lyricists like Andre 3000 and Shawn Carter. On the other hand it at least proves that Jeezy is consistent given that he rhymes “snowman” with “snow, man” on his very first album.

Jeezy’s most endearing quality then, besides his raspy voice, is that he’s incredibly blunt in his delivery. When he calls someone a “fuck nigga” as he does on the Trick Daddy song, he makes those words drip with venom. It’s as though anybody who would be fake with him is the lowest form of life that exists on Earth – or as he puts it, “niggaz actin like broads.” Don’t expect Jeezy to be politically correct or clean up his language – his appeal comes from being the exact opposite of that. Jeezy also has a good ear for production, letting the likes of Lil Lody, Drumma Boy, and even Warren G (on “Leave You Alone” featuring Ne-Yo) handle the work behind the boards. The album walks a fine line between being enjoyable and obnoxious. Thanks in large part to the beats and the guest appearances, and in small part to Jeezy’s frank delivery and raspy voice, it leans more toward the former than the latter, leading me to give this album a cautious thumbs up.