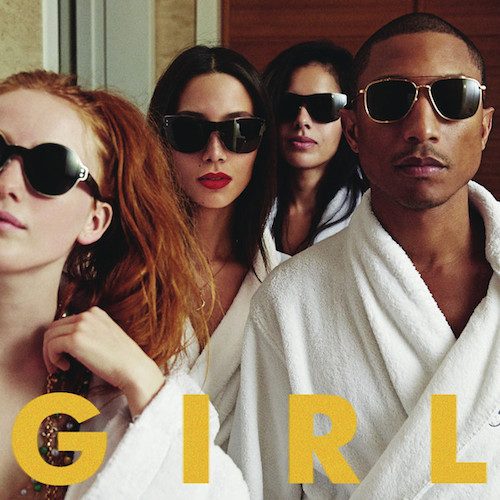 Pharrell hasn’t released a solo album since “In My Mind” in 2006, but that doesn’t mean his star as diminished. If anything he’s a far bigger star now, having won 5 more Grammy Awards and having produced more top ten hits than we could list if this entire review simply chronicled his accomplishments. His signature falsetto style is warmly embraced by fans of both pop and hip-hop, and even his absurd Canadian mounty Grammy hat went viral and got its own Twitter account. As you can see from the picture accompanying this article, it’s far from his first odd fashion choice, but eccentricity is an expected trait when you reach superstardom status.

Mr. Williams lives up to those obligations with no pretension. One gets the feeling he’d be an oddball whether or not he had ever gone from that dude from The Neptunes to being famous internationally. It’s probably beneficial that he’s always been a little weird, a little bit out there, given that he doesn’t have to respond to the cliched “keeping it real” dialogue that often dogs hip-hop icons. How real are you supposed to keep it from Virginia Beach anyway? It’s not exactly South Central. It’s not hard to understand why he can record a song like “Happy,” which pre-dates the “G I R L” album on the “Despicable Me 2

” soundtrack. He starts the song with the apologetic “It might seem crazy, what I’m ’bout to say” as though it’s wrong to feel such joy. It would be wrong to NOT enjoy all of his success though.

“Here come bad news, talkin this and that
Well gimme all you got and don’t hold me back
Well I should probably warn you I’ll be just fine
No offense to you – don’t waste your time”

Since Pharrell encourages us to clap along with the song if we’re happy too, I’ll go one step further and applaud his enthusiastic ode to joy. You can’t look at Pharrell Williams and think things like “he didn’t work hard to get where he is” or “he shouldn’t be so happy with so much trouble in the world.” He did work that hard – he’s been producing hits for three decades. He should be that happy – his music brings joy to himself and to millions. Pharrell can’t solve all of the problems in Syria, Ukraine or the Central African Republic, but who expected him to anyway? “G I R L” is not an album about complex international politics – it’s about dancing your cares away. That’s what Pharrell and Timberlake aim to do on “Brand New,” a song that’s eerily musically and vocally reminiscent of the late great Michael Jackson. To be fair there’s another reason Pharrell doesn’t rap about geopolitical problems – it’s not clear he has the lyric writing ability to do so. This kind of criticism is duck off a water’s back to such an ebulliently joyful person, which is just as well, since it frees up a writer to note that he’s often just plain cornball if you write his words down and read them back. He’s an undisputed genius at producing songs, just not so much at penning them. He can cover this flaw when he’s in the background making hits for others, but “G I R L” nails him to a cross of his own ambitions, and songs like “It Girl” crucify him.

Mr. Williams apparently thought these words were so nice that he should repeat them THREE TIMES – he can’t come up with any new sentiments a minute or two later. Let the words “I’ve got treasure to hide, so let’s keep it from the strangers” sink in – you’ll hear it again. Pharrell writes poetry like a teenager who leaves handwritten notes and chocolates on the desk of his high school crush. To some degree you can call it cute – until you hear it repeated ad nauseum – and that’s why the term “nauseum” was invented. Pharrell needs collaborators as much or more than any producer, which is why (not surprisingly) songs like “Come Get It Bae” featuring Miley Cyrus and “Gust of Wind” featuring Daft Punk are among the album’s high spots. “G I R L” is like a piece of musical candy, but don’t assume you’re an all-day sucker if you buy it. So long as you don’t expect Shakespeare and don’t presume this to be a rap album, you won’t be mad. It’s pure pop done the way Pharrell does it. Would a Snoop Dogg or Pusha T cameo have hurt things? Not at all. You’re not getting them though. Another time perhaps, another album – not this one.