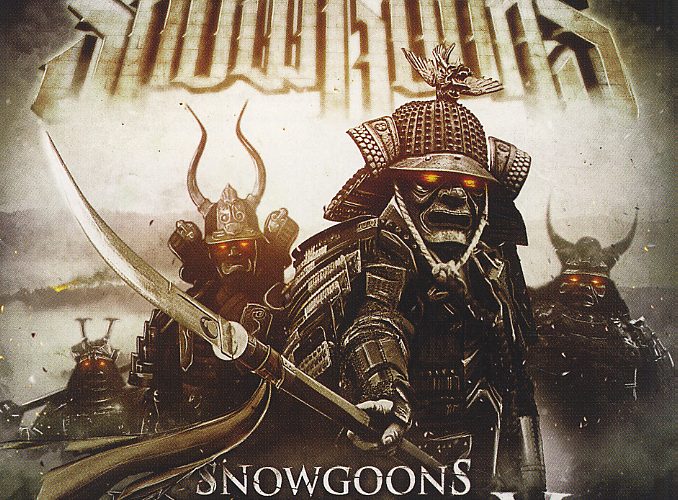 Snowgoons albums increasingly remind me, in terms of their line-up, of the Gathering of the Juggalos. You’ve got the hosts who have been there from day one, the numerous affiliates they’ve accumulated over the years, the veterans they reserved a special place in their hearts and on their stage/in their studio for, and finally the nobodies and the newcomers. Their latest features two generations of Eminem affiliates, rappers from three different platinum acts, underground artists from New York, Boston, Detroit, New Jersey, Baltimore, Philadelphia, L.A. and the Bay, indie mainstays such as Blaq Poet and Main Flow, etc. The Snowgoons literally got things covered.

It’s safe to say that they made more connects than any other producer/s in the last ten years. They count “Snowgoons Dynasty” as their fifth album since their ’07 debut, but a quick glance at their discography shows that they’ve had an even busier schedule. Only this year for instance they also put out a project exclusively with German rappers entitled “Terroristen Volk.” Jay-Z once envisioned a rap “Dynasty,” and while the Roc name is as illustrious as ever, the family ties weren’t always the strongest. The Snowgoons handle things differently, to a point where every rapper who is featured on one of their tracks momentarily becomes a Snowgoon himself and thus part of the Snowgoons dynasty. What format would be better suited to celebrate such an extended family tree than a double disc?

Under these premises it’s still astounding to what degree the Snowgoons manage to keep their sound intact, including the vocal performances of their guests. It seems once they hear a Goons beat, rappers have no other option than to get gruff and grimey. “The Cypher” boasts appearances from Ghostface Killah and Killah Priest, but until I saw the video I had a hard time believing it was them. You’d swear these guys came up with some type of AutoGoon filter to get that guttural gutter sound out of even the smoothest voice. Ex-Arsonist Freestyle leads the way, introducing “the fifth chapter of a long-standing legacy” with what sounds more severe than just a sore throat or a slight cold (“Snowgoons Dynasty Pt 2”). It’s no different on CD 2, where Sicknature reps his bandmates and their brand in the opening track (“Goon MuSick”).

There are plenty of solid performances here. Philly’s Krush Unit demonstrate their motivation over basic rock riffs (“What U Do This For”), Q.U. representative Sean Strange finds inspiration in one of his own songs to deliver an emotional tale of survival (“Cardiac Rhythm”), Fel Sweetenberg describes a rapper’s need for self-expression (and an audience to go with it) (“Born to Spit”), Boston’s Knowbodies, Checkmark, E-Flash and The Bronx’ Smiley turn hip-hop into their “Fight Club,” and B-More’s Dirt Platoon sum their approach up with the compelling conundrum “Give you good music, take your life” (“Shutout”).

But there’s also the type of Snowgoons track that has little to do with ingenuity and originality and everything with following a formula. Take “The Legacy.” A track with 15 MC’s of Virtuoso’s and Punchline’s caliber should be a triumph, instead it’s a crowd of rappers who don’t know what to rap about over the barely functional beat. Or “Get Off the Ground.” The Lil’ Fame hook comes across like a “Sparta” leftover and the rest of the vocals sound like they were recorded on the tourbus, rappers like Sean Price, Ruste Juxx and Termanology reacting to the vaguely archaic, militant beat the way they are conditioned to. It’s the kind of non-descript track with which SG run their concept into the ground. The problem is not limited to the cyphers, some solo tracks are just as formulaic.

Another issue that remains often unresolved is why these rappers are so darn angry and aggressive. Blacastan sets a particularly bad example on the absurdly titled “Turistas,” offering absolutely no excuses or explanations during his splatter rap:

“The craving is real, this is why we rape and we kill
Fans idolize, pray to see our names on the bill
to hear twisted tales of murder, how we mangle for thrills
Release albums and we migratin’ back to the hills
We’ll be writin’ more poems at the altar with the skull and bones
Drill holes, insert tablets up in your dome
Make zombies out of niggas, make slaves out of bitches
Never photograph proper when they pose for flicks with us
I’m a witchdoctor, blacker than the suit on Hasidics
Serial killer dippin’ since you rap and we live it
Got woodchippers in the backyard strictly for critics
You know what we rep, see the pentagram on the fitted”

The lack of subtlety that can take hold of the Snowgoons’ music is exemplified by sameness of the drums. On many tracks it’s hard to discern any difference in the drum sounds used. They seem to be under the delusion that monumental settings suffice for timeless music. Compared to other producers they are aware of the importance of drum and bass, but rhythmically the track is often only saved by the bass.

Things instantly look up when the rah-rah subsides. Lyriciss offers a welcome break with the blissful “Better Day,” sounding like himself rather than a cardboard cut-out. “Queens” recalls late ’90s beats the likes of Big Pun or Lord Tariq & Peter Gunz rapped over and fittingly features Royal Flush of “Iced Out Medallions” fame. Rozewood’s “Street Passion” transports the claustrophobic feeling of ’90s records like “Hell on Earth” to the present and “What That West Like” is the type of dark, creeping track Crooked I would also feel at home on alongside guests Planet Asia, Ras Kass et al. “Take Notes” with NBS and Lady Repo bounces with the confidence of an ’03 Obie Trice track. Another highlight is the regrettably short “Akhenaten (One)” by New Jersey’s Hasan Salaam, who wraps his raspy vocals nicely around a combination of revving basslines and anthemic horns.

You know the type of film that spells BLOCKBUSTER in big and loud letters but still amounts to nothing more than a b-movie? “Snowgoons Dynasty” is closer to b-movie than to blockbuster status. Still there are certain things about what the quartet calls Goon MuSick that should find universal acclaim. The combination of action and reflection that is the mark of many of their songs. The fact that after rappers they’re also starting to put on producers (Grim Reaperz from France and Scarcity Budapest from Hungary). The numerous scratches. (They do detract from the gripping tale Bam tells in “Get Down,” though.) The way “The Cypher” pays tribute to Mad Skillz. The fact that they let the late Viro the Virus close out the album. In the end there is something essentially hip-hop about the Snowgoons. They’re all about making the impossible happen. If nobody else ever thought of putting Fredro Starr, Ill Bill and Thirstin Howl III on the same track, the Snowgoons did. If nobody else cares to remind us Tragedy Khadafi is still one of the best at this, the Snowgoons do. And that combination of competence and devil-may-care attitude might just be the secret of their success.